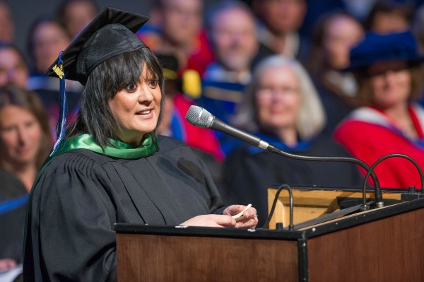 For Dawna Hope, being able to earn her BSc without leaving her home territory was the opportunity of a lifetime. 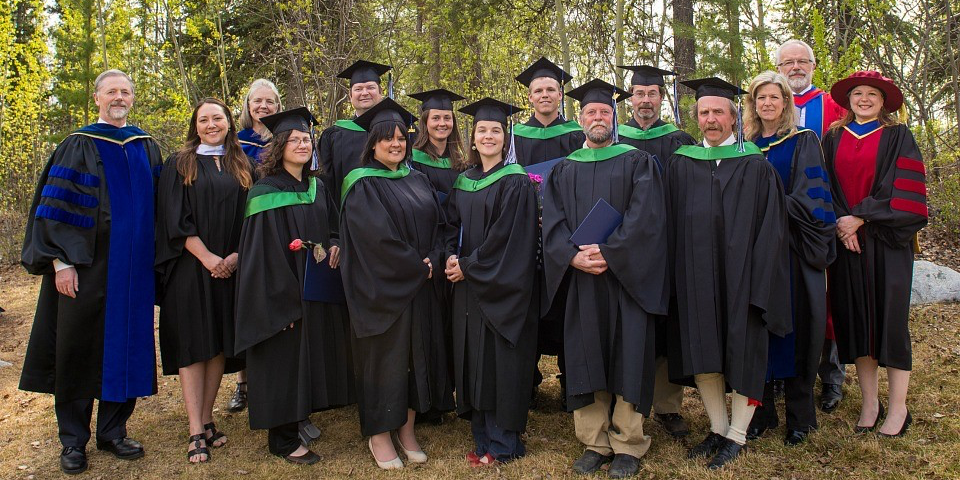 The nine members of the Northern ENCS class of 2014 (wearing green collars) with UAlberta and Yukon College officials.

(Edmonton) If it weren’t for a partnership between the University of Alberta and Yukon College, Yukoner Dawna Hope wouldn’t be as full of hope as she is today.

The 44-year-old member of the Na-Cho Nyak Dun First Nation is one of nine students at Yukon College who graduated last week with a bachelor of science degree in Northern Environmental and Conservation Sciences from the U of A. The program is delivered at Yukon College, helping build scientific capacity in the North by giving students the opportunity to earn the degree without having to leave their home territory.

“I’ve just grown immensely,” said Hope of her experience during her undergraduate studies. “I was quite shy when I was first out of the gate.”

That makes it all the more remarkable that Hope, who describes herself as an introvert, delivered a speech to the entire graduating class of the college during convocation. She underlined that it took a lot of people to help the graduates succeed.

“This is only the beginning of our journey. It’s time to give back, pay it forward. We are now prepared with the skills, the tools we need out there in real life,” she said.

Hope started her BSc part-time in 2009 while working full-time. The following year, she decided to continue her studies full-time and also kept working full-time for the past three years, at first with her First Nation and then with the government of the Yukon.

“That’s the beauty of the program,” she said. “It’s really tailored to the working person. The way classes were structured allowed us to do that. Courses [were taught] through lunchtime and in the evenings. It really helps accommodate the working person.”

Indeed, most graduates of the program this year were, like Hope, working either part- or full-time, and had pursued a variety of paths before entering the program.

It’s a fact that did not go unnoticed by John Kennelly, dean of the Faculty of Agricultural, Life and Environmental Sciences, who attended the convocation.

“None of the graduating students followed the traditional model of high school to university,” he said. “I find it truly remarkable that a university that graduates thousands of students each year can still provide an education tailored to meet the needs of individual students. It’s a credit to the partnership and to both institutions.”

Fiona Schmiegelow, a U of A professor and director of the Northern ENCS program, said the program to date has admitted about 30 students, more than half of whom are working professionals.

The program was launched in 2010. Similar to the parallel program based in Edmonton, its curriculum integrates natural and social sciences related to issues like wildlife conservation, land use, resource management under modern treaties, energy and global climate change. But the Northern ENCS program is distinct in its inclusion of significant northern and First Nations studies content that reflects the local environmental, economic and social context.

Schmiegelow said the program has been very successful, thanks to the tremendous support it has received from both the U of A and Yukon College.

“We’ve delivered on our initial objectives and we’re now looking at expanding the program and the partnership in different ways,” she said, adding that the program just developed a dedicated major, Northern Systems, customized to northern issues.

This year’s graduating class joins Natasha Ayoub, last year’s only graduate and the program’s first. Ayoub, who now works full-time with the Carcross Tagish First Nation as an environmental and ecological manager, was the first student ever to receive a BSc north of the 60th parallel in Canada.

As for Hope, who also became a grandmother during her studies, she will continue to work full-time as a fish and wildlife technologist for the Yukon government and plans to start her master’s degree next year.