In a remote hamlet in Nunavut, U of A master’s student Yashi Parmar gained a new perspective on the complexities of local planning—and a new appreciation for small-town life. 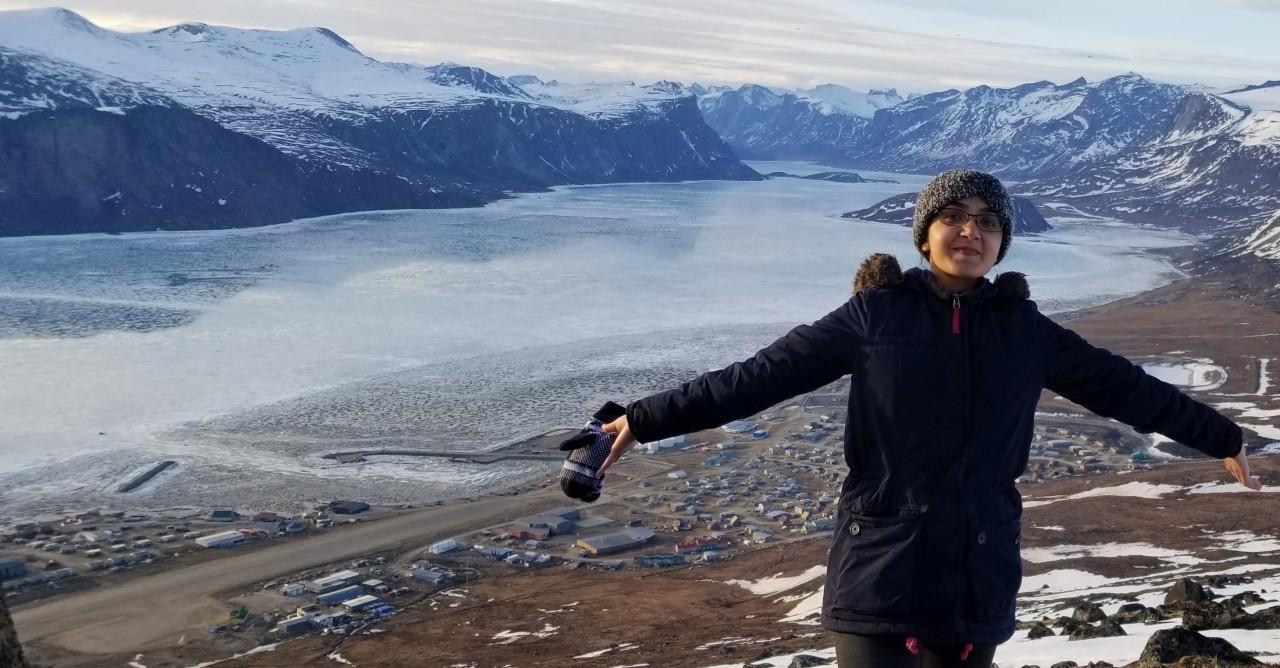 Yashi Parmar gained first-hand experience in local planning during her internship in the northern community of Pangnirtung, Nunavut. "When you're actually in the community and you see how complicated things get, it really expands your understanding of what you've learned in class." (Photo: Supplied)

When Yashi Parmar landed in the remote northern hamlet of Pangnirtung, Nunavut, on Baffin Island last summer, she was shown a number of steel barrels that had once contained an unidentified toxic substance.

Her assignment, said her boss, was to figure out how to dispose of the barrels and clean up the site.

The drums were dumped in the first place because there are no roads out of the fly-in community, so removing them by truck just wasn’t possible.

"A lot of what I was trying to figure out was whether it was possible to ship these barrels somewhere, and who's going to take them?” said Parmar.

Parmar’s internship was funded by the Graduate Student Internship Program and the community of Pangnirtung, and arranged by the U of A’s Engage North office, which provides four-month placements with community-based organizations in Canada’s North. The placements are designed to give undergraduate and graduate students professional experience while helping fulfil community-driven projects.

"What I really liked about the Engage North internship is that it's based on what the community needs and wants,” she said. “It opened my eyes to the fact that you can sit in university and read about something, but you're never going to understand it unless you're there.”

When she accepted the internship, Parmar had never been north of Edmonton. In fact, the second-year master’s student inurban and regional planning had never even left home, having lived in Toronto and Edmonton her whole life.

"Just looking at a map, [Baffin Island] is so far—it's closer to Iceland than Edmonton,” she said, admitting to having had some nervous apprehension.

"It's also a very small community—I thought Edmonton was small when I first came here.”

When Parmar completed her first degree, in environmental studies, she wasn’t sure of a career path but knew she had always been interested in conservation and “how we can do things differently."

Pursuing environmental law was one option. She even wrote the ALSAT to qualify for law school before finding out about the U of A’s new science program in urban and regional planning.

"I felt like I could do more practical things as a planner, that it would be more hands-on," she said.

"Planning implies looking into the future … and it's also really multidisciplinary, so you can take it in whatever direction you want."

When Parmar arrived in Pangnirtung to take up her role as an environmental wellness intern under the hamlet’s economic development officer, she was stunned by the region’s beauty, captured on her blog.

“Every window you look out of has a mountain.”

As a city girl, she was also pleasantly surprised by the cohesion and intimacy of the hamlet.

"I think it really changed my idea of what a small community is, and can be, to live in. I used to say, 'I will never live in a small town.’

“We're constantly told in the program that there are jobs in smaller towns, even in Alberta. I was always hesitant because I wasn't sure I would like it … I wasn't sure I'd even like Edmonton when I first moved here [from Toronto].

“But I loved living up North. It's opened up my view of where I'd like to work, because I'm not so narrow-minded about it."

In addition to her central task of cleaning up the contamination site, Parmar also helped run a science camp for kids, hire summer students in the community and support the local youth council.

She said the internship also opened her eyes to what planning looks like in a real setting, where local politics and environmental considerations often defy easy solutions to problems.

"When you're actually in the community and you see how complicated things get, it really expands your understanding of what you've learned in class. So now I'm very critical" of those who are judgmental or jump to conclusions, she said.

By the end of the summer, Parmar submitted a report to local council, which recommended hiring a consultant to help figure out what’s in the barrels and train staff in the handling of hazardous waste.

She also urged the community to create a designated hazardous waste storage area to safely accommodate properly labelled materials such as waste fuel, batteries, antifreeze and propane tanks until they can be shipped out during sealift season, typically in August.

When she returned to the U of A last fall for her final year, she was so inspired by her internship that she tried to change her thesis project to focus on waste diversion in small communities, but it was too late.

"It requires being there,” she said. “It’s not something I could do remotely." But she added she may tackle that topic in a future doctorate.

In the meantime, she’ll be looking at the best ways to establish “pocket” green spaces in urban environments.

"I want to look at how cities can implement at least small pockets of green where there isn't the capacity to create a large park."

Parmar will also work this term with U of A urban planning researcher Sandeep Agrawal to help develop an evaluation framework for the Sahtu Land Use Plan in the Northwest Territories before graduating next June as part of the U of A’s first master’s class in urban and regional planning.