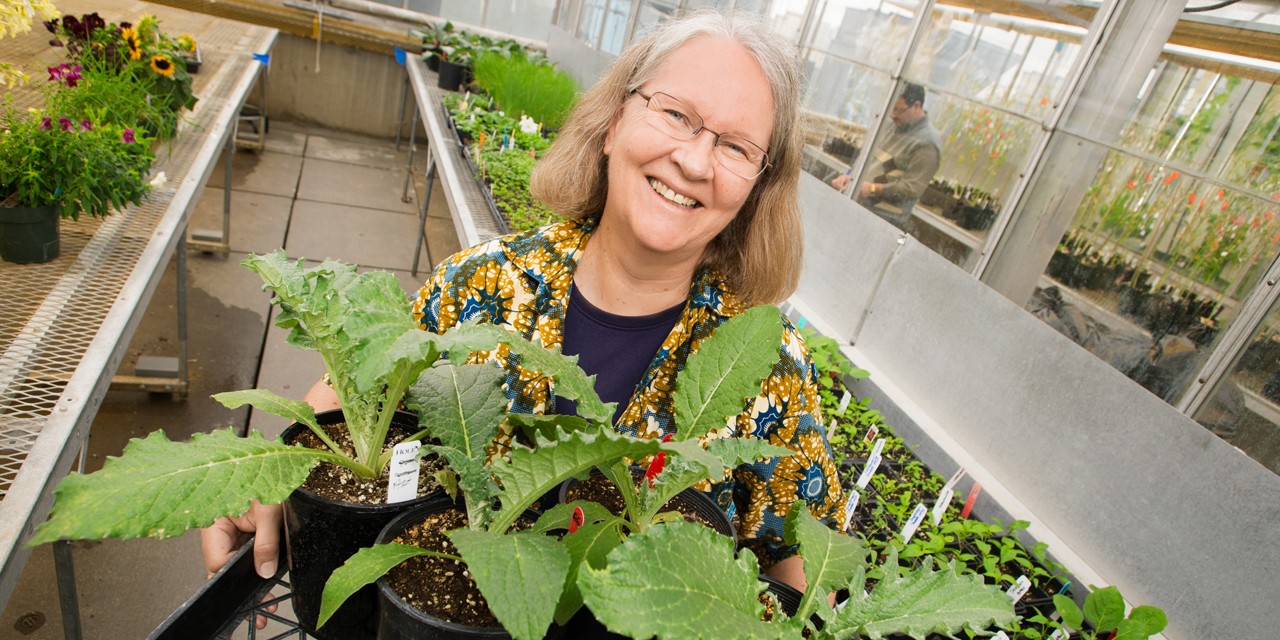 Since its beginnings in 2009, the Green & Gold Garden has been grown and harvested by a community of volunteers, including Shirley Ross, a retired U of A crop scientist and one of three 2017 UAlberta Community Connections Award winners.

When asked why she loves to garden, Shirley Ross quotes the late Lois Hole, Alberta’s most beloved green thumb.

"Caring is the soul of gardening . . . We take risks and place our trust in factors beyond our control. Yet in the end, we are almost always rewarded with a beautiful harvest."

As a longtime volunteer at the University of Alberta’s Green & Gold Community Garden, Ross feels those gentle, wise words sum up her experience working alongside others to make the two-acre patch of land on South Campus the bountiful, giving place it has become.

“It rings true for me regarding the wonderful, caring group of people who volunteer at the garden. And although we have contended at times with drought, flooding and snow, we have usually been rewarded with a bounty of vegetables.”

Since its beginnings in 2009, the Green & Gold Garden has been grown and harvested by a community of volunteers, including Ross, a retired U of A crop scientist. The fresh produce sold each year funds the Tubahumurize Association, supporting female victims of violence a world away in Rwanda.

Ross devotes much of her retirement to working year-round for the garden, and is being honoured May 15 with a Community Connections Award for her dedication. The 2017 winner of the UAlberta Advocate Award, Ross is being recognized for sharing her time, expertise and passion to plan the garden each year.

Growing up on a dairy farm close to Alberta’s scenic Battle River Valley, Ross has always been rooted in gardening. There was a big vegetable patch that fed the family, along with flowers to make things pretty, and she remembers exploring the countryside’s natural beauty. “From a young age I would go wandering in the woods and along the railroad track looking at the wildflowers.”

Today, she’s still enjoying “green therapy” as she calls it, by overseeing certain aspects of the garden, which boasts more than 50 varieties of vegetables, herbs, flowers, fruit—and most recently, a new orchard. She not only takes on the mundane but important spadework of writing grant proposals and budgeting for the garden, but puts her scientific know-how to work too.

“Shirley is a driving force behind the garden,” said Susan Cleary, one of several garden volunteers who nominated Ross for the award. “She plays a year-round role and it’s a full-time commitment. She’s always the person who is there before everyone else and after everybody else leaves for the day.”

Ross spends her winters planning for the new growing season, sourcing seeds, plotting out crop rotations and brainstorming with other volunteers on how to improve the garden each season. As spring approaches, she can be found in a campus greenhouse, carefully watching over tender new plants that make their way into the garden.

“For me, volunteering in the garden is a fortunate matching of my interests with an opportunity that is very rewarding. And I love seeing things grow. You plant some seeds and it’s magic,” said Ross.

“It doesn’t seem to make a difference how busy we might be with customers, if someone asks for a cabbage and there’s not one available, I can run and find Shirley and she knows right away where there’s a cabbage or when it will be ready,” said Cleary, adding that Ross is a pillar of calm in the hustle and bustle of market season, and knows every inch of the garden.

That said, Ross considers the U of A award to be a team honour, shared with the small army of more than 100 volunteers who collectively tend the garden each season. In its eight years of existence, the garden has raised $198,000 for Tubahumurize—which means ‘to console and give hope’ in Rwandan—including more than $35,000 last year alone. The money is used to help women and their children receive trauma counselling, vocational training, micro-loans and support for those living with HIV/AIDS.

“Our volunteers take on a lot of responsibility, and I see us as a community being recognized for our outreach,” Ross said. “The Green & Gold Garden really represents some of the best of what the U of A is. It’s building on agricultural traditions on South Campus and it provides the people of Edmonton with a beautiful green space. At the same time, it’s providing for people on the other side of the world.”

She and her fellow volunteers also reap the benefits of what they sow, she added.

“People seem to get a lot of pleasure out of the whole thing. Some volunteers bring their friends to the garden and it becomes a place where there’s a social aspect. Customers who visit sometimes come back the next week with their kids or grandparents.” A Syrian refugee who’d farmed his own land visited the garden last year and it was easy to see how he enjoyed it, Ross said. “It was good for him to walk around and look at the vegetables.”

Even with the challenge of Alberta’s growing season, when some years are better than others and the results are important for the vulnerable people who rely on the profits of a good Green & Gold harvest, Ross is a “glass is half-full” kind of person, Cleary said.

“Even though we could be wallowing in mud and the crops are flooded, she’ll think of something positive about it.”

“You can wake up to snow on the ground, like we did last year,” Ross said. “But our philosophy is, something has to grow. Something will fail, but you’ve got enough of other things to cover the loss.

“You can never know everything about gardening. What’s great is you are always learning.”