Not your average artist in residence 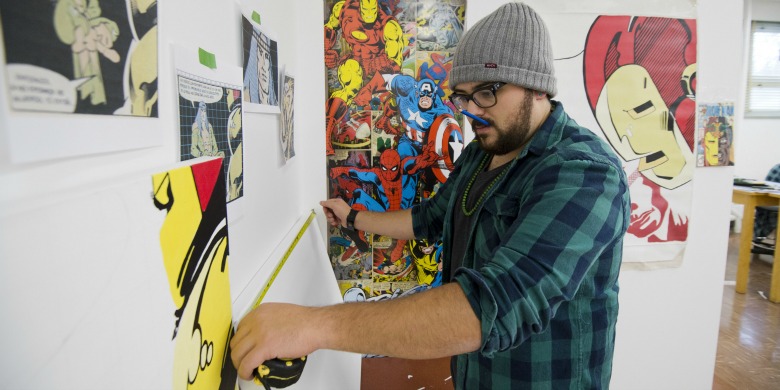 (Edmonton) There’s a poster on the door of Jordan Bennett’s art studio at the U of A, reading “Not your average gift shop Indian.”

It’s a tongue-in-cheek statement to be sure, but also on the mark when it comes to Bennett’s rich array of artwork. Using everything from photography to performance to channel his creativity, Bennett is impishly challenging stereotypes about indigenous peoples and their art.

“I want to turn those stereotypes on their head.”

The young Mi'kmaq artist from Newfoundland is the U of A’s first-ever Indigenous Artist in Residence and will be sharing his work and his vision with the campus and the larger community until his appointment ends in May 2013.

Bennett is grateful for the opportunity provided by the U of A. “It’s given me a chance to access the Prairies, to talk with prominent artists at the U of A and to share my work. For a university to back an artist that much is huge. There are so many resources here and the interdisciplinary collaboration among departments is amazing.”

The Indigenous Artist in Residence position is a two-year pilot project supported by the Office of the Provost and Vice-President (Academic), to create an enriching cross-cultural experience for the U of A, said Tracy Bear, head of Aboriginal initiatives.

“Jordan makes a social statement with his art that will help build community on campus and create a forum for dialogue. His work is visually appealing and really compelling in a social context.”

Bennett squeezes every last drop out of multimedia—digital media, painting, sculpture, installations—to cross pop culture with traditional indigenous materials, melding the contemporary and the traditional to reclaim what he feels indigenous art is about.

Mixing such materials as hide and antlers with metal and wood, Bennett creates contemporary works that could stand as artifacts, but that still break the rules and step beyond assumptions about indigenous art. “I don’t make your average dream-catchers, but I play with those ideas.”

Connecting with youth is especially important to his purpose, and that is reflected in his colourful, fast-forward work. Examples include a richly beaded pair of skateboard shoes worked in the style of traditional moccasins and sporting a museum-style artifact tag, and an Iron Man comic-book series, revamped from a 1985 version and featuring Shaman, an indigenous protagonist.

By playing with themes that speak to young people, Bennett hopes to kindle their personal creativity and pride in their cultures.

“If you get kids involved at an earlier age in the creative process, they are hooked. No matter what your heritage is, it’s good to know where you come from.”

Bennett, who launched his career as an artist in 2008, has created thousands of works. His vibrant, provocative visions have captured widespread acclaim, most recently the Charles Pachter Prize for Emerging Canadian Artists from the Hnatyshyn Foundation. The national award honours the work of visual artists under the age of 30.

Bennett also hosts a blog, called Not Your Average Gift Shop Indian, which he started when he arrived on campus this fall to engage students. Focused on commentary about music, art and politics related to indigenous issues, the blog garnered 570 views in its first week.

While at the U of A, Bennett will work with students in the faculties of native studies, education and arts, and will maintain a studio in the South Academic Building and office space in Pembina Hall, the home of the Faculty of Native Studies. Among his engagements on campus is a keynote address Nov. 16 at the Native Studies Research Day.

“My main goal is to talk to people, to show them you can pursue your dream; if you want to be creative you can turn it into a career.”

To view more of Jordan Bennett’s work, visit his website at www.jordanbennett.ca

Not your average artist in residence
Newsroom