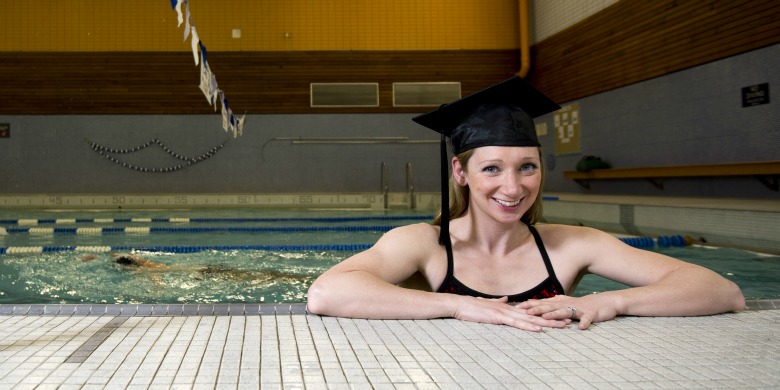 (Edmonton) Leigh Pinard might enjoy jumping from planes, but she didn’t exactly fall into nursing school at the University of Alberta. Not right away, at least.

An officer cadet with the Canadian Forces and former member of their SkyHawks parachute team, Pinard took a less direct trajectory to a degree from the Faculty of Nursing’s after-degree program. That journey has included stops in Ottawa, Borden, Kingston, Trenton, the United States and Poland, and even a seven-month tour in Afghanistan, where she served as a medic.

“Nursing was kind of a natural progression from being a medic. I loved being a medic but being a nurse is an officer position,” said Pinard, 29, whose first degree was in health sciences and psychology. “I wanted to be in more of a leadership position, and nursing provides a great opportunity to do that.”

Pinard knew very little about the profession until her late teens, when she had her appendix removed in a hospital in her hometown of Ottawa. It was the nursing staff who left a lasting impression, and it’s no surprise that she finds hands-on patient interaction a true reward.

“With nursing, you’re the person who is looking after that patient, you’re always at the bedside and you’re the person to hold their hand,” she says. “There are so many things a nurse can do that make or break a patient’s stay in the hospital.”

But becoming a nurse didn’t happen overnight. When other students at the University of Ottawa were checking out local clubs on campus, Pinard joined the reserves as an infantry soldier with an eye on being a ceremonial guard on Parliament Hill.

She enjoyed the experience and her peers so much, she stayed on and completed full training, eventually volunteering to serve in Afghanistan as a medic with a counter-improvised explosive device (IED) team.

“I got to see all the different sides of Afghanistan,” says Pinard of her travels, which took her from Kandahar to Kabul and less violent northern areas of the country. “It’s a completely different country up there, a lot more peaceful.”

Her military career has also allowed her to pursue more leisurely pastimes like skydiving and competing in triathlons with the CF national team. Pinard did her first tandem skydive before leaving for Afghanistan and that was it; she was hooked. After some gruelling training, she made the Skyhawks parachute team—one of only eight women to do so in its 40-year history—and performed in air shows across the country, jumping from planes with the team’s signature Canadian-flag parachutes.

Skydiving pushes you to the limit, says Pinard, who now has 275 dives under her belt—still a far cry from her husband Master Cpl. Sebastien Pinard’s 1,000-plus.

“When we’re stressed, we go skydiving,” she says. “The only thing you can think about at that minute is the skydive. Everything else seems to melt away.”

Pinard also pushes herself on foot, in the water and on two wheels, as a member of the national triathlon team. She’s bumped elbows and rubbed tires with military personnel from around the world, including Switzerland for the most recent Conseil International du Sport Militaire.

“Physically and mentally it’s one of the most challenging sports I’ve ever done,” she says.

Pinard trains round the clock, something that wasn’t easy with a hectic academic schedule. She’d start in the morning at the U of A pool before going to classes, followed by studying in the library and then working out in the gym.

“It’s been busy,” she concedes, but adds that her schedule did take her mind off other worries—like her husband’s tour in Afghanistan. “It was a good and bad thing, I guess. It made me sit down and focus on school.”

Pinard also credits her success to the helpful staff and quality teachers in the nursing faculty who kept her on her toes.

“It was fast and furious. The program was really tough but I feel like, after just completing my nursing licensing exam, they really did a great job preparing us in the two years.”

Unfortunately, convocation doesn’t equate to rest. In fact, Pinard has to skip the ceremony to travel cross-country for field training for her officer commission. Her nursing career holds many possibilities, from specializing in an intensive care unit to air medevac to mental health, though she’s currently leaning toward being an operating-room nurse—which she did during her preceptorship at the Misericordia Hospital.