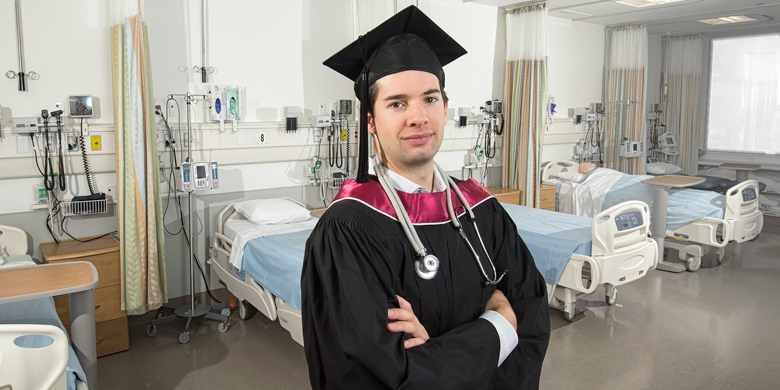 (Edmonton) Eric Martin was a third-year apprentice electrician when something sparked his desire to go to university.

Martin earned his bachelor of science degree from the University of Alberta in 2009 and worked in the health-care industry before he decided to return to the U of A, this time to the nursing after-degree program. Along the way, he co-founded a student initiative called iCare, an education and screening program that helps detect early signs of visual impairment in inner-city schoolchildren.

“I’ve always been passionate about health care and promoting health. And I found a need in the community,” he said. “We pushed this forward to create a sustainable program—starting at the U of A—but hopefully promoting it within the province and eventually within the country.”

iCare’s website notes the initiative has already aided countless youth since its inception, and Martin can certainly feel a sense of pride in the difference it has made in those young lives. He says his personal experience with visual acuity deficits, and those of some of his family, motivated the focus of his work.

“These types of things pushed me and developed more of a personal aspect to helping out in the community,” said Martin. “I find that it’s easily preventable and fixable with the right tools in the community and knowing the options.”

If he were not already busy enough, he found himself volunteering as part of the Health Sciences Students’ Association and his faculty’s health and wellness committee. Martin also chose to take advantage of an open position on the Nursing Undergraduate Association. He found that the position allowed him to marry his interest in the interdisciplinary aspect of health care and the iCare project. Martin is proud of the work this group accomplished, both on and off campus. It also opened opportunities to expand the work iCare was able to do in the region—work that helps reduce potential learning deficits and safety issues among youth.

“Hopefully early next year, we’ll actually make the initiative part of the Faculty of Nursing in their community health program,” he said. “We’re trying to make more of a push and a global connection between faculty, the students’ association and volunteers here on campus.”

As he transitions into his next career beyond the U of A, Martin has started passing the torch to other nursing students he says have already demonstrated their skills in promoting the initiative on campus. With a full-time job in Alberta Health Services, planning a wedding for next summer and his continued side-work expanding iCare’s relationships in the community, he says another return to the U of A to undertake graduate work in nursing or perhaps an MBA is in the cards.