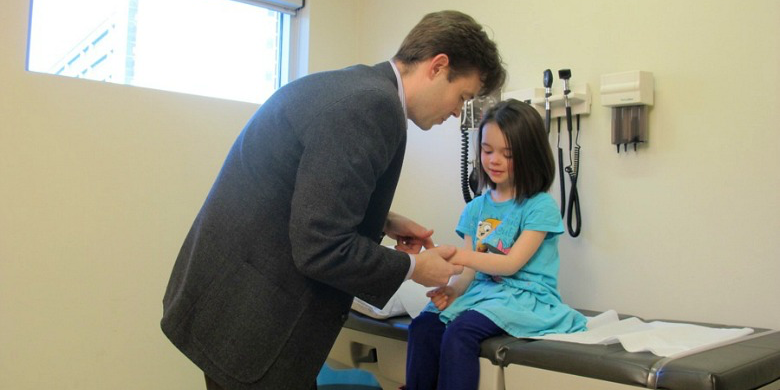 Andrew Dixon shows how to treat a pulled elbow on a young patient.

(Edmonton) Pulled elbow, also known as “nursemaid’s elbow,” is a common injury in children under six years old, because the immature elbow joint may dislocate more easily. Though the process to treat the injury takes only a few minutes, children and their parents may wait for hours in the emergency room before they see a physician. But Andrew Dixon, assistant professor of pediatrics in the Faculty of Medicine & Dentistry, says children’s discomfort—and demand on emergency room resources—could be lessened if triage nurses could treat the injury.

Dixon led a trial at the Children’s Hospital of Eastern Ontario to investigate the success rate of nurse-led versus physician-led treatment for pulled elbow. An informal survey of pediatricians throughout Canada determined that they would consider implementing nurse-led treatment as routine protocol if their success rate was within 10 per cent of the physician success rate. The study was published in the Canadian Medical Association Journal.

“From our experience, nurses are good at identifying pulled elbows,” Dixon said. “We thought that if we could teach them to reduce the injury, then these kids who are waiting, in pain, for several hours in the emergency room to see the physician, could be treated by a triage nurse within minutes of arrival and feel better almost immediately.”

About 60 nurses were trained in the technique. The protocol outlined for the study dictates that hyperpronation—the technique of turning the forearm inward—should be attempted first. If the child isn’t using the arm normally within 10 minutes, supination-flexion—turning the arm outward and ending with flexing movement—is the next step. If the injury persisted after nurse treatment, children were placed in line in the traditional emergency system to await physician treatment. All patients were seen by a physician before being discharged home.

Over a year, triage nurses and physicians were assigned random days to lead treatment of the injury. Results showed that nurses came slightly short of their goal: they had an 85 per cent success rate, compared with the physicians’ 97 per cent.

Dixon suspects the nurses were hesitant to perform the procedure because it is outside their traditional training, and their exposure during the trial was limited. With 124 children treated by nearly 60 triage nurses, each nurse only completed one or two procedures.

“I think some of [the nurses’ hesitancy] was [due to] comfort and experience that still needed to develop,” he said, noting that the nurses did not attempt a second reduction in 79 per cent of failed cases. If those cases were excluded because of deviation from standardized protocol, nurses would have fallen in the accepted margin with a 91 per cent success rate.

Despite the nurses’ falling slightly outside of the 10 per cent margin in this trial, Dixon would like to see nurses identifying and reducing pulled elbow.

“Over time, once all of those nurses have done 10 treatments, are they going to be better? I think they will be,” he said. “The only way to know that is to go forward and look at the numbers after implementation of the protocol and see where they are a year down the road.”