Nursing pioneer an 'architect' of research in Alberta 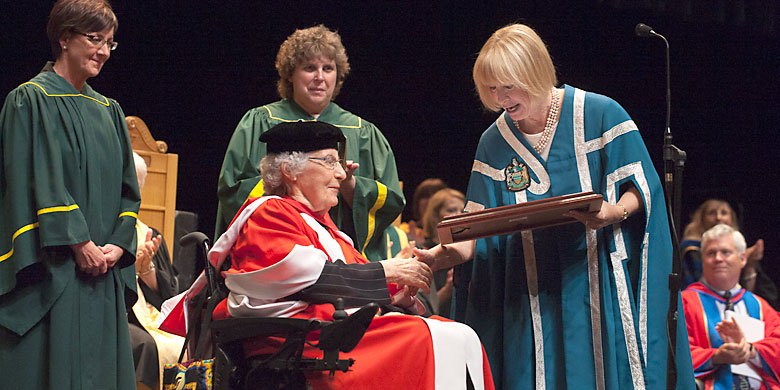 120608-shirleystinson-banner
U of A professor emerita Shirley Stinson received her honorary doctor of science degree June 7.

(Edmonton) When Shirley Stinson returned to the University of Alberta in 1969 fresh from her doctoral studies in New York, nursing research wasn’t exactly a burning priority.

Just one research project was underway at the time, and even that was modest by today’s standards—a comparative analysis of nursing students’ marks from Grade 12 and the results of their registered nurse licensing exam. There was no research funding or coursework available to support nursing research, faculty or students, Stinson recalls.

Four decades later, it’s a much different story. The graduating undergrad class has swelled to 441 from 90, and 1,176 undergraduate, master’s, doctoral and post-doctoral students are enrolled in nursing programs today.

“There are literally hundreds of projects underway, involving millions of dollars in funding,” Stinson said. “A remarkable research infrastructure has been developed to support faculty and students, whose research projects often involve partnerships with national and international colleagues.”

Called a “pioneer, “visionary” and “architect” of nursing research in Alberta, Stinson was recognized June 7 for her significant achievements when she received an honorary doctor of science degree from the U of A.

The architect label hearkened back to childhood dreams, remembers Stinson, whose words to the graduands of 2012 were spoken by longtime colleague Jeanne Bresner. Stinson and her brother Donald delivered the Edmonton Bulletin and The Star Weekly newspapers so they had enough spending money to buy Popular Mechanics.

“I read every issue from cover to cover, and was thoroughly fascinated and entranced with architecture in particular.”

But Stinson’s family was of modest means, so she opted for a more affordable education, following her sister Elizabeth to study nursing at the U of A. After graduating in 1953 and working in public health nursing in the region for several years, Stinson decided to go for a master’s degree at the University of Minnesota—“a very significant turning point in my life.”

Stinson went on to teach at Toronto’s Hospital for Sick Children before pursuing a doctorate in education at Columbia University. When she returned to the U of A to teach in the faculties of nursing and medicine, she was the only nurse with doctoral education in Western Canada.

From the start, Stinson designed and taught courses that were interdisciplinary in nature—commonplace today but unheard of then. She led efforts to create a master of nursing program at the U of A in 1975 and a PhD program in 1991, and led efforts to create similar programs across Canada.

A prolific researcher and author of more than 100 scientific papers, Stinson was also ahead of her time as an advocate for increased funding support for nursing research.

When the Alberta Heritage Foundation for Medical Research was created by the Peter Lougheed government in the early 1980s, funding for nursing and health services administration wasn’t included. Stinson wrote several letters to the premier, a colleague from their days on the U of A Students’ Council, imploring him to “use his power and influence” to include nursing.

Eventually, the province created the Alberta Foundation for Nursing Research, a $1-million endowment for nursing research. Stinson was the inaugural chair from 1982 to 1988, and later served as president of the Canadian Nurses Association, chaired the first international Nursing Research Conference and served as an advisor to nursing organizations including the World Health Organization.

Stinson was the first woman and first nurse to receive the federal title of Senior Health Research Scientist, is a member of the Alberta Order of Excellence and, in 2002, was named an Officer of the Order of Canada for her vision and leadership in nursing education and research here and abroad.

It’s no wonder a provincial nursing newsletter editor once called Stinson “the architect of nursing research in Alberta.”

“That made me feel that I had indeed realized my dream of becoming an architect!” she said.

Today, Stinson remains abreast of the latest advances, including work on quantum methods in nursing research that pertain to her Parkinson’s disease.

She said research helped her achieve her dreams, and she implored the graduands to reach for theirs.

“I encourage each and every one of you to do that, keeping in mind that there is a force, a creative energy and intelligence for good in the world beyond our knowing and even our dreaming. So I urge you to be open to exceeding even your wildest dreams.”

Nursing pioneer an 'architect' of research in Alberta
Newsroom