‘I’m just so grateful that I was able to do what I could.’ 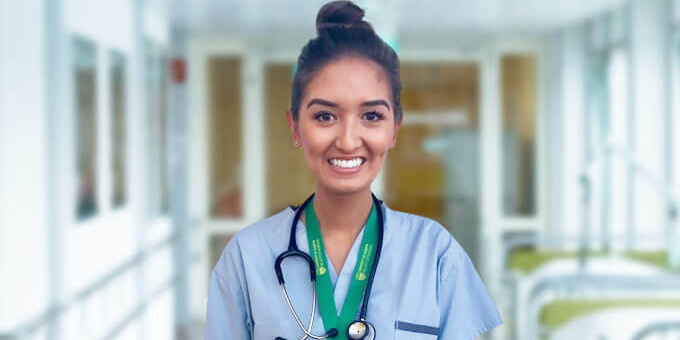 Fourth-year nursing student Nena Powell put her training to work in aiding one of the victims of an attack Saturday night where the driver of a U-Haul truck drove into pedestrians.

If fourth-year UAlberta nursing student Nena Powell had any reservations about her chosen profession, they were silenced with the constant and willful beat of a human heart.

Last Saturday night, Powell was working behind the bar at The Pint along 109th Street when her manager asked her to attend to a man who had just been hit by a vehicle.

Unbeknownst to her, he was one of the four victims in Edmonton’s downtown that saw the driver of a U-Haul truck plow into four pedestrians after stabbing a police officer earlier in the evening.

“When I got there, (the victim) was lying outside, unresponsive,” she said. “My first thought was to make sure he was in C-spine because we learned that in a trauma accident where you’re worried about level of consciousness, you have to make sure you stabilize the head.

“There was a girl nearby, I got her to stabilize his head, and then my instinct was to feel his pulse, I wanted to make sure I could feel a heartbeat. I monitored his heart rate and respirations until the ambulance came.”

Relieved to hear that the young man is well on his way to recovery, Powell looks back on incident, thankful for her training, which included placements in neurosurgery at the U of A hospital, orthopedic surgery at the Royal Alexandra Hospital and in some mental-health facilities.

“I’ve been put in some very serious situations, but nothing like that. It was so awesome that I was able to utilize what I learned in nursing.”

She says she is also became incredibly grateful for the unsung job done by everyone once the paramedics took over.

“There are so many other incredible nurses and doctors that did so much more than I did post-accident,” said Powell, adding her role in the night was just one of many. “I’m obviously proud of myself for stepping up to the plate, but I think anyone in my situation would have done the exact same thing.”

With time to reflect back on all that happened that evening, Powell says she has developed a newfound appreciation for the institutionalized vigilance of CPR training found in health care.

“As health-care workers, we kind of roll our eyes at the thought of renewing our CPR training, but in that moment I realized, ‘if this dude’s heart stops beating right now, I’m going to know what to do.’”

As for nursing, Powell says she can’t imagine doing anything else. “I love learning about people. I love the aspect of caring for people in their most vulnerable state. I love the opportunity to jump in and make a difference.”