Students fill backpacks with donated items for people headed back to the street after leaving hospital. 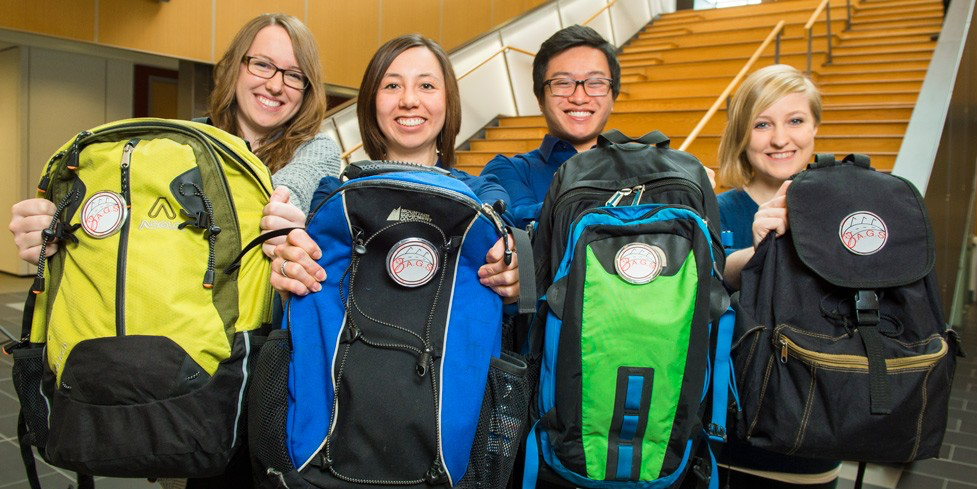 The prospects for homeless people recovering from an injury or illness discharged from hospital into the unknown—often with nothing—were bettered this past winter thanks to a group of University of Alberta nursing students’ streetwise take on a long-standing Finnish social service.

“We were speaking with the Boyle Street Community Services tuberculosis nurse about this problem and I remembered hearing something about baby boxes that are handed out to all new mothers in Finland,” said final-year nursing student Katelyn Lee of the state’s eight-decade-old maternity box program that provides the essentials of life—winter clothes, diapers and bedding—for Finnish newborns. “Our idea for the project was something similar to that.”

Lee and fellow nursing students Kelsey McDougall, Kevin Chung and Elizabeth Morris came up with the idea to fill backpacks with useful supplies to people headed back to the streets after being discharged from hospital.

“We wanted to address vulnerability at a critical moment, raise awareness and give people resources when they needed them,” said McDougall.

The group called their project—part of their community health placement—BAGS, or Backpacks Armed with Gear for Streetlife.

She said the first step in the project was to find out whether a backpack full of survival supplies was something vulnerable populations would like to get.

The response was overwhelmingly positive, so the team started handing out a list of supplies to various stakeholders, potential sponsors, friends and family, and set up a fundraiser online.

“It is my understanding that almost all the bags have been handed out, and we’ve even seen people walking around with them,” said McDougall. “We’re now exploring new ways of raising money and awareness to continue with the project.”

Melanie Meardi, the course lecturer, said giving future nurses exposure to homeless and low-income populations broadens how students think about the role of the community health nurse and becomes a tangible way they can contribute back to the community they are learning from.

“Students come away with an increased understanding about social justice and how it relates to their code of ethics and responsibility to advocate for marginalized populations to improve quality of life and help people overcome barriers they may face.”