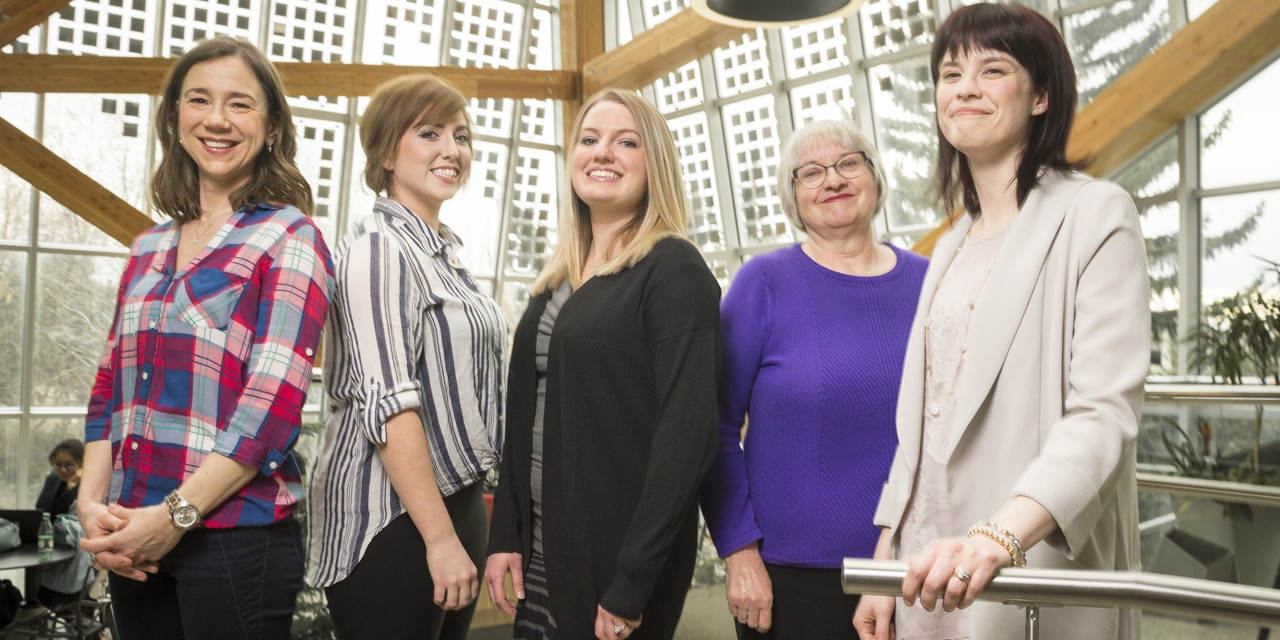 If the University Health Centre Nursing team would have had a spare second to come up with a team-building mantra in the midst of helping settle and care for some 1,200 evacuees sent to the U of A after being displaced by the Fort McMurray wildfires of 2016, ‘without hesitation’ would fit the bill.

In the three weeks that followed the fire, this group of five nurses—Beth Woytas, Terry Scott, Melissa Williams, Crystal Hoven and Carly Floyd—became the medical face of the U of A’s response to the evacuation.

As one of the first groups to mobilize, the nursing team was responsible for a medical triage station that supported the physical and emotional needs of both children and adults in need of regular health checks, prescriptions, pregnancy care, dental assistance and resolution to more urgent health matters.

For their dedication to the people of Fort McMurray during a time of need, the group has been awarded the U of A’s 2017 Community Leader Award, which was designed to recognize those who have made a valuable contribution to bridging the university’s commitment to learning, discovery and citizenship with the community.

“I get to see their professionalism and care day in and day out, and everyone else saw it then, too,” said Lorrie Killips, director of the University Health Centre.

One of the people who witnessed the team in action was Frank Robinson, a former dean of students who volunteered to run a makeshift dispensary in Lister Hall, just down the way from the nurses’ triage station.

“They really treated the situation as if hours didn’t matter and working conditions didn’t matter,” he said, adding he often marvelled at their continuously high spirits. “They were totally in their element even at 11 o’clock at night handing out medication or giving advice.”

He remembers when a gastrointestinal bug started making its way through Lister Hall, the nurses worked to stem the tide, at times calling on family members to get more medicine rather than further burden the people they were serving.

“They would bring me boxes full of Ziploc bags each containing a single Immodium, and they transcribed everything it said on the box right on the bag. It was amazing,” said Robinson.

Regardless of the physical and emotional trauma that evacuees presented to the team, Robinson said the nurses consistently provided a compassionate and reassuring touchpoint that created stability.

“Emergency management can be stressful, but I never saw any stressful stuff with them. It was always very calm and reassuring," he said.

“I think they just really wanted to make a difference.”

Killips says her team’s compassionate nature stems from the fact they work to day to day in a student-oriented services area.

“You want to make sure the students are successful and part of that success comes from being healthy,” she said, adding the University Health Centre offers a variety complex situations.

“We try to empower our nurses to feel confident. To do that, we ensure that they are up on their skills and get the experience and knowledge they need to thrive.”

As one of three U of A Community Connections Awards, the Leader Award recognizes those who showcase the university as a place of community by participating in public speaking events, visiting schools, or volunteering with various community groups. The award is a demonstration of how they bring the U of A promise of “uplifting the whole people” into their communities.