Grassroots effort to fly the Maple Leaf raises support for charities, including UAlberta’s Institute for Stuttering Treatment and Research. 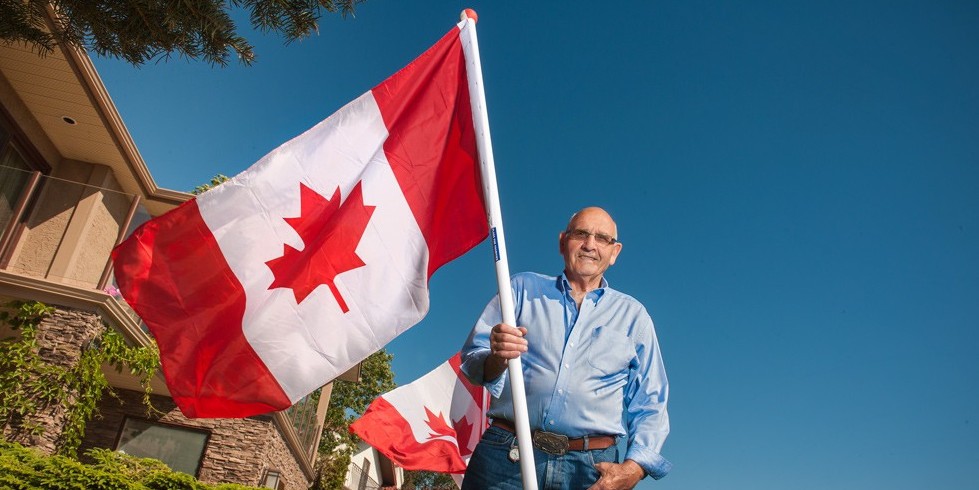 (Edmonton) On Canada Day, nearly 200 homes in Edmonton will fly the Maple Leaf in a salute to the nation’s 147th birthday. But beyond patriotism, those flags also symbolize good deeds that are possible when a group of people rally behind a cause—or in this case, several causes.

Each flag represents a donation to a charity of choice, the handiwork of Flags for Charities founder Ken Haverland, who personally crafted the flags and poles while soliciting donations in the community. His efforts have helped raise more than $110,000 for several charities, including the Institute for Stuttering Treatment and Research at the University of Alberta.

“I was raised in a family where helping others and giving to charity, seeing just how much you can really do to make other people’s life a bit easier was a big thing,” said Haverland, 73, the retired owner of several farm equipment dealerships. “It’s my life.”

A 30-year member of Rotary, Haverland came across the idea of handing out flags as a fundraiser from a friend who had attended a Rotary meeting in Houston, Tex., and where the major fundraising efforts were renting flags to U.S. citizens. The friend introduced the program to the club here in Edmonton and Ken got involved.

It didn’t work as well as Ken thought it could, so he made a change or two along the way, and in 2013, on a trial basis, he gave out flags to homeowners, who willingly made donations directly to charities of their choice. The flags were purely a way to say thanks for helping others. Not everyone agreed, so in 2014, Ken set out on his own, setting up Flags for Charities, as a banner for the new group.

So far this year, he’s planted 195 flags, including to one homeowner, who alone has given just under $60,000 to charities in one year.

“The response has been really amazing, yet I had thought that homeowners do give a lot of money to charity, for which most of them really receive very little in the way of recognition. Our flag says thank you and identifies a super group of people who really do care,” says Haverland, who does most of the legwork himself but doesn’t accept a dime.

“We accept no money ourselves, we ask that donations go directly to the charity of your choice, we only ask for an email to us, setting out what you gave and to which charity—a great spot for an ole cowboy like me.”

Partnership helps give the gift of fluent speech

One of the organizations that has benefited most from Flags for Charities is one close to Haverland’s heart, ISTAR. Several years ago during a trip to Belize to attend a job fair with his wife Eunice and others, they met a young man named Robert, the oldest son of a family of five who had troubles communicating because of a severe stutter.

Haverland and friends in Camrose later sponsored Robert, bringing him to Edmonton for a three-week intensive speech program at ISTAR that concluded with participants giving speeches to a live audience.

“They just had a barrel full of fun and were talking freely. This is a helluva program, and when I got started with the flags, I thought, let’s see if we can’t help.”

Haverland has raised roughly $30,000 for ISTAR, money that goes to providing speech therapy for people who stutter and empowering them with the tools they need to speak fluently and also cope emotionally after often growing up with a communication disorder and the challenges and stress that can bring, says Deryk Beal, executive director of ISTAR.

“Ken is a go-getter. When he puts his mind to something he does it,” says Beal. “His generosity to ISTAR seems to know no bounds at this point, and not only is he generous with his money, he’s been extremely generous with his time, as evident from all his efforts with Flags for Charities. That’s the type of grassroots fundraising that has made ISTAR work so well for 27 years now.”

Haverland isn’t sure how many flags he’ll end up planting this year, or what the future holds. But with a garage full of supplies for 700 flags, he’s sure to keep busy.

“At the end of your life, it doesn’t matter how much money you’ve made, it’s how much you’ve helped somebody else.”

Anyone interested in participating in Flags for Charities can call Haverland at 780-668-9932 or email kenhaverland@telus.net.