For a century, the Arts Building has reflected the ideal of an arts education, and now inspires a new leadership initiative. 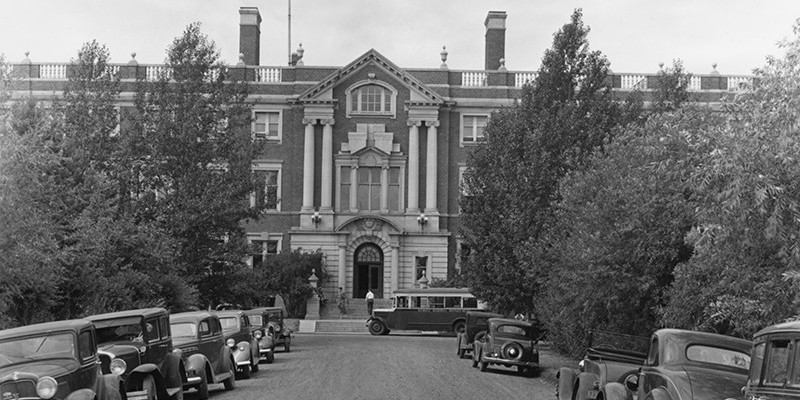 The Arts Building turns 100 this year, and like all centenarians, it has a story to tell.

In 1908, the University of Alberta Senate established its first faculty—the Faculty of Arts and Sciences—with four departments: English, history, modern languages and applied sciences. The Arts Building, now affectionately known as “Old Arts,” was officially opened Oct. 6, 1915, by Alberta’s first lieutenant-governor, G.H.V. Bulyea. At the time, it was the most expensive building ever constructed in Edmonton: neo-classical in design, graceful yet stalwart, with a sundial below the upper window on the exterior of the south façade that reads, “I Count Only the Sunny Hours.”

The construction of the Arts Building took a circuitous road to completion. According to president emeritus Robert Newton, multiple and sometimes conflicting design proposals delayed the construction for a number of years. “The mixed, and in some cases incongruous, architecture of the university must be laid in part at President Henry Marshall Tory’s door. That the Arts Building, the best one constructed during his regime, is a pleasure to look at, is due more to the influence of certain staff members than to Tory himself.”

Once built, the Arts Building quickly became the centre of campus life, with students taking all classes in the building. Along with the lecture rooms, it contained laboratories, administration offices, a bookstore, a post office, a library and Convocation Hall. Then and now, Convocation Hall was used for annual graduation exercises and formal musical gatherings. In its earlier days, it also provided space for Students' Union election rallies and Remembrance Day services.

“The Arts Building—with its Beaux Arts architecture and bronze busts of great men in the lobby, reflected the ideal of liberal arts,” alumna Myra Davies (’69 BA) said of the building. “Up on the third floor, in the art department, there were big plaster casts of Greek marbles, though by then they were no longer used for drawing classes. The lounge to the right as you came through the front doors of the building was old-fashioned, with a fireplace and built-in oak cabinets, like an English gentlemen’s club. The classroom on the opposite side of the foyer was where Henry Kreisel lectured. I used to sneak in sometimes. He was so popular you couldn’t always get a seat.”

While the Arts Building remains a living museum, steeped in history and inspiring all those who enter its doors, it no longer stands alone at the forefront of Arts leadership on campus. As we celebrate the 100th anniversary of its construction, we carry forward its enduring spirit in the new Peter Lougheed Leadership College (PLLC). With the groundbreaking held earlier this year and completion set for spring 2017, the college promises to uphold and build upon the rich legacy of Arts leadership at the U of A. The inaugural course to be offered by the PLLC, The Foundations of Leadership, is an Arts initiative, with former prime minister Kim Campbell—also an adjunct professor in the Department of Political Science—as the principal instructor.

From its opening 100 years ago, the Arts Building has seen generational shifts in its long and dignified history and, to this day, remains at the metaphorical core of all Arts initiatives, including the PLLC. Those who envisioned the building and what it would represent believed that an Arts degree was key to Canada’s future, with Arts graduates leading the way in the type of creative problem solving required of a growing nation. That it has achieved this and more is undeniable. That it will continue to do so is a certainty.

All quotes are from I Was There by Ellen Schoeck (University of Alberta Press, 2006)