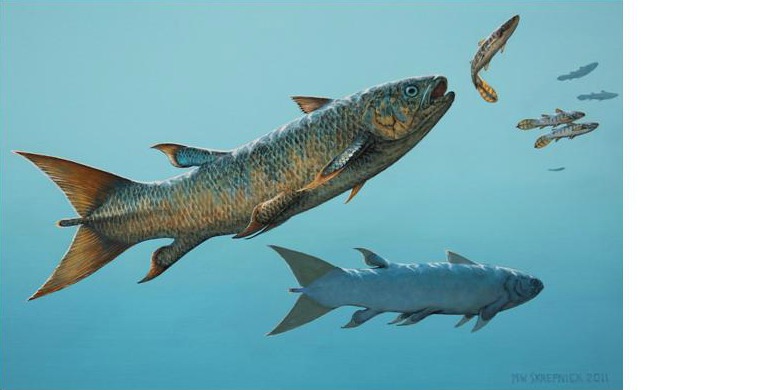 120501-coelacanth-banner
U of A researchers have identified a fork-tailed coelacanth that lived about 240 million years ago. Artwork: Michael Skrepnick

(Edmonton) Coelacanths, an ancient group of fishes that were once thought to exist only in fossils, made headlines in 1938 when one of their modern relatives was pulled alive from the ocean. Now coelacanths are making another splash—and University of Alberta researchers are responsible for the discovery.

Lead U of A researcher Andrew Wendruff identified coelacanth fossils that he says are so dramatically different from previous finds, they shatter the theory that coelacanth evolution was stagnant in that their body shape and lifestyle changed little since the origin of the group.

“Our coelacanth had a forked tail, indicating it was a fast-moving, aggressive predator, which is very different from the shape and movement of all other coelacanths in the fossil record,” said Wendruff.

The researchers say all other ancient coelacanth fossils, and even the modern living coelacanths, have very different bodies.

The first modern coelacanth, or “living fossil,” was captured 74 years ago off the coast of South Africa. Since then, others have been caught in southern oceans near the Comoros Islands, Tanzania and Indonesia.

The fork-tailed fossils described by the U of A team were found in the Rocky Mountains near Tumbler Ridge, British Columbia. Wendruff’s research co-author, U of A professor emeritus Mark Wilson, says the eastern range of the Rockies 240 million years ago was a very different place from what it is today. “The area was underwater, lying off the western coast of the supercontinent Pangaea.”

Wilson describes typical coelacanths as having chunky bodies, fins of varying size and broad, flexible tails. “These fish were slow-moving and probably lay in wait for their prey,” he said.

Wendruff’s coelacanth is so different from all others that it’s been given its own name, Rebellatrix, which means “rebel coelacanth.” The researchers say Rebellatrix came along after the end-Permian mass extinction 250 million years ago, an event so lethal it wiped out 90 per cent of marine life.

“Rebellatrix was likely a spectacular failure in the evolution of cruising predation,” said Wendruff. “Clearly, some other fish groups with forked tails must have outperformed this coelacanth, as it does not appear later in the fossil record.” Wilson notes that one group of fishes that may have outperformed Rebellatrix were sharks, fossils of which were found in the same rocks.

The research by Wendruff and Wilson was published May 2 as the cover article in the Journal of Vertebrate Paleontology.