On the icy edge of innovation 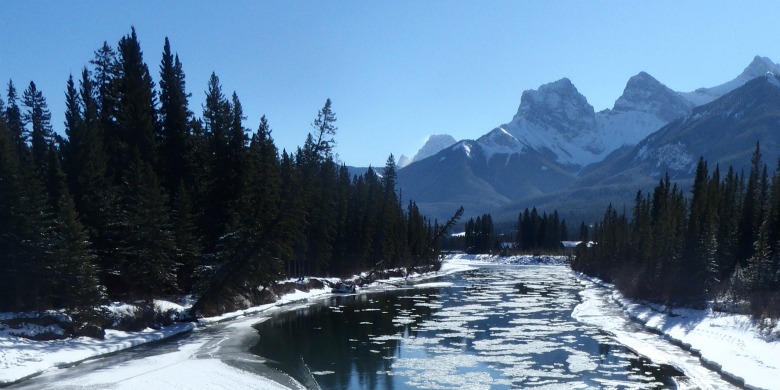 A fourth-year U of A engineering student's work on an undergraduate research project has led to a protocol that could improve understanding of how ice forms on rivers and streams.

Working with civil engineering professor Mark Loewen, Nicholas Landry was able to successfully illustrate the shape and size of frazil ice. Commonly visible in early fall, frazil ice is the first stage in river ice formation. As temperatures drop below freezing, a mix of ice crystals and liquids produce a slushy appearance or “frazil ice” on streams or rivers in the turbulent flow.

Because it grows quickly and forms below the surface water, frazil ice is difficult to detect, and as a result, large accumulations can cause problems for facilities that require fresh water continuously by clogging the openings.

“If we are able to use Nicholas’s technique to determine the size of frazil ice particles in rivers, we would be able to use this information to improve models of river ice processes, particularly river freeze-up,” says Loewen. “Measuring frazil ice particle sizes in different rivers may also increase our understanding of what factors influence or determine the size of the particles.”

For the project, Landry cut frazil ice samples into very thin sections and placed them under direct cross-polarized light. As the light passed through each frazil ice crystal, it refracted in a different orientation. The varying crystal colours made it possible to detect each frazil ice crystal’s boundary. He was then able to develop an algorithm that successfully identified crystal boundaries in 90 per cent of cases.

“This project was about furthering the field of research to better model freeze-up in the winter,” says Landry. “Frazil ice crystallography was a cool project because I was able to combine civil engineering with image photography and computer science. Little is known about frazil ice properties.

“My research was really focused on developing a protocol that could help automate the characterization of these frazil ice properties. Later, my methods could be used to draw comparisons between frazil ice that is formed in various settings.”

The frazil ice core samples were collected from the North Saskatchewan River in January 2011 and were compared with samples taken in March 2011. Once those crystal sizes were determined, Landry compared them with frazil ice samples produced in the U of A laboratory.

“Using MATLAB [a technical computing language], I was able to identify the crystal boundaries and compute the crystal sizes by marking points with high light intensity gradients, which corresponded to changes in crystal colours,” he explained. “I learned a lot about how river ice develops, and about the science of photography and photo analysis.”

Landry's research opportunity was part of the Dean's Research Award program in the engineering faculty, which allows undergraduate students to pursue practical research experience and gain in-depth understanding of what they learn in the classroom.

On the icy edge of innovation
Newsroom