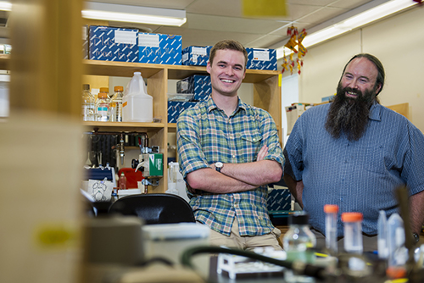 Phil Oel (left) and his PhD supervisor Ted Allison compared zebrafish retinas with those from mammals.
“

What we’ve proposed here for the first time is a mechanism for how mammals survived that initial nocturnal stage—how they were able to make many rods and exploit that nighttime adaptation. This has been theorized now for some 70-odd years, so it’s a big vision mystery solved.

On the Jurassic evolutionary battlefield, survival is in the eye of the evolver

Decades-long evolutionary mystery solved thanks to new research showing how a unique adaptation for night vision gave mammals a critical advantage over predatory dinosaurs in the Jurassic period. 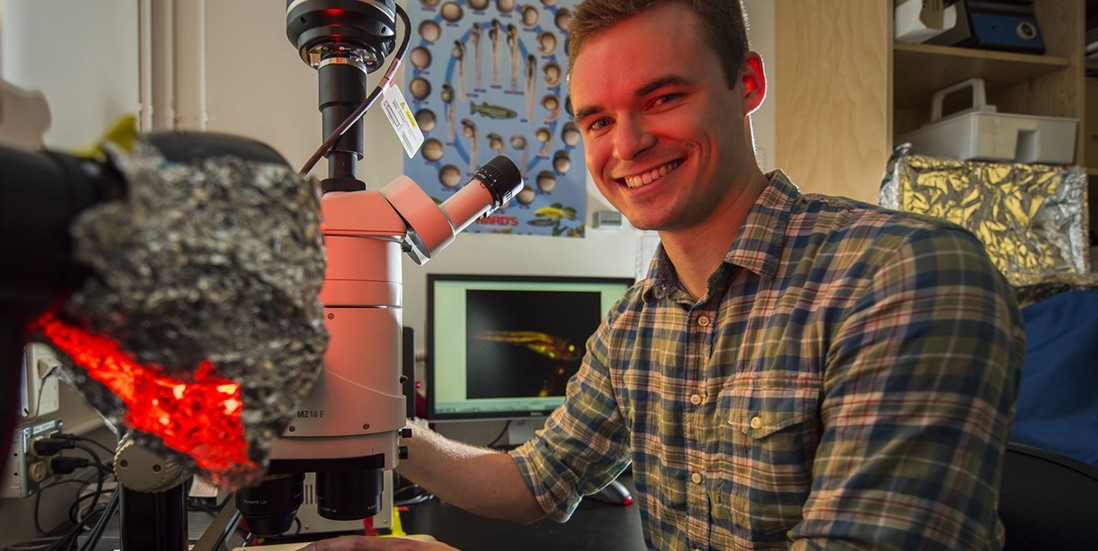 While seeking answers to one long-standing research question, PhD candidate Phil Oel and his colleagues instead discovered a solution to a completely different evolutionary puzzle.

A unique genetic ability to transform some types of cones into rods may have helped early mammals survive the late Jurassic, according to a new study from scientists at the University of Alberta and the U.S. National Eye Institute.

Rods and cones are the two main types of photoreceptor cells found in the retina with complementary functions. Rods provide reliable functionality even in dim light, making them highly suited for night vision, while cones offer less sensitive but more nuanced colour vision that is useless in low-light scenarios.

At first glance, rods would appear to be the more primitive of the two cells; however, based on several factors such as the proteins present in each of the cells, researchers have long suspected that the colour-detecting cones actually came first, later giving rise to the more robust rods.

So, when a study examining mouse retinas seemed to yield evidence supporting this theory of cone-to-rod transition, researchers initially thought it would mean case closed.

“We found evidence in the mouse that these rods were coming from cones, and thought we’d figured it out at that point,” says Phil Oel, PhD candidate in the Department of Biological Sciences and co-first author on the study. “But then, when we looked for the same thing in zebrafish, we found no evidence for the same feature—that any rods were ever coming from cones.”

While the discovery that mice had the ability to change certain types of cones—the short-wave cones responsible for sensing blue light—into rods is groundbreaking in itself, the lack of the same feature in zebrafish means that this also offers a long-sought solution to a 70-year-old evolutionary puzzle.

Given each photoreceptor’s respective functionality, it would be reasonable to assume that diurnal creatures would be disposed to a colour-sensitive, cone-dominant retina for optimal daytime vision; however, studies have shown that mammal evolution has instead resulted in a rod-dominant retina better suited for night vision—even within non-nocturnal species like humans.

As far back as the 1940s, biologists traced this rod-dominant mammalian retina to a late-Jurassic evolutionary event known as the “nocturnal bottleneck.” “During the Jurassic period, mammals are diversifying, or about to diversify,” says Ted Allison, associate professor in the Department of Biological Sciences. “The concept that’s been in the literature for years is that mammals took on a nocturnal habit to survive this period, and escaped the daytime roaming dinosaurs by being more active at night.”

Those mammals best able to exploit their adaptations for a nighttime environment were the ones that survived, going on to diversify and populate the current mammals. Though this theory has been broadly accepted among evolutionary researchers for decades, one key question persisted—if the mammals were somehow able to produce extra rods for nocturnal adaptation, where did they come from?

“What we’ve proposed here for the first time is a mechanism for how mammals survived that initial nocturnal stage—how they were able to make many rods and exploit that nighttime adaptation,” explains Allison. “This nocturnal bottleneck has been theorized now for some 70-odd years, so it’s a big vision mystery solved.”

The findings not only have far-reaching evolutionary implications, but may also lead to clinical applications down the road. Since it now seems that mammals have two different ways to generate rods, it may be possible to use this understanding to help restore vision in humans.

The study, “Recruitment of Rod Photoreceptors from Short-Wavelength-Sensitive Cones during the Evolution of Nocturnal Vision in Mammals,” was conducted in co-ordination with Anand Swaroop and his team at the National Eye Institute in Bethesda, MD, and was recently published in the journal Developmental Cell.

On the Jurassic evolutionary battlefield, survival is in the eye of the evolver
Newsroom