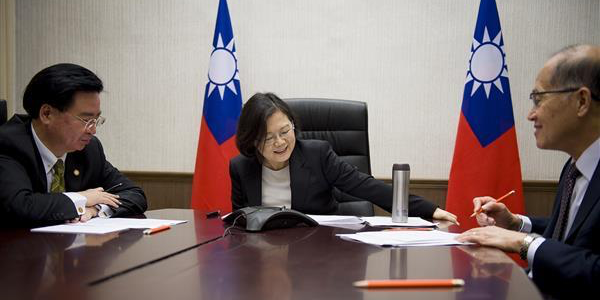 U.S. president-elect Donald Trump broke a nearly four-decade-long protocol in U.S.-China relations last week when he took a phone call from Taiwanese president Tsai Ing-wen. The chat caused a diplomatic storm and sparked extensive speculation on what all this means about Mr. Trump’s diplomatic style in general, and the new administration’s policy toward China in particular.

Western media reaction ranged from ridiculing Mr. Trump for his diplomatic naiveté and carelessness to linking the call with Trump family business interests in Taiwan. Beijing, long accustomed to being the “scapegoat” during U.S. presidential election cycles, initially played down the call as a “petty trick” by Taiwan, but then became alarmed enough to lodge “stern representations” to the U.S. government.

Although a new U.S. president’s policy toward China normally takes months to formulate, it is clear the Trump-Tsai conversation was not simply just a “courtesy” call, as vice-president-elect Mike Pence put it.

First, Mr. Trump has again demonstrated that he is perfectly willing to disregard traditional foreign-policy norms in Washington, even with a country that has enough military and economic might to challenge U.S. global supremacy. Mr. Trump raised eyebrows with his praise of Russian President Vladimir Putin during the campaign and, lately, with his “unscripted” phone calls with the leaders of Pakistan and the Philippines. Now, facing criticism of provoking Beijing, Mr. Trump doubled down—tweeting of course—by accusing China of devaluing its currency, taxing U.S. products and building up its military in the South China Sea. One Trump adviser went further: “If China doesn’t like it, screw ’em.”

Second, the call with the Taiwanese leader was in fact carefully planned and scripted, showing a lot more strategic thinking and planning than the general reporting has shown. Reince Priebus, former chairman of the Republican National Committee and Mr. Trump’s pick as his chief of staff, has maintained close ties to Taiwan and visited Taipei to meet with the then-president-elect Ms. Tsai just over a year ago. Stronger language of supporting Taiwan was inserted into the Republican election platform in the summer. The planning of phone calls with world leaders immediately following the election already included President Tsai, and Mr. Trump was briefed before the call.

Third, Mr. Trump is positioning himself to use plenty of leverage and suspense in his administration’s dealing with Beijing in the coming years.

During the election campaign, Mr. Trump—while promising to renegotiate the North American free-trade agreement and withdraw from the Trans-Pacific Partnership—also repeatedly lashed out at China for “raping America” with unfair trade and currency policies. The Chinese leaders have displayed caution and restraint in not picking a fight over these accusations. This old playbook acknowledges the reality of the different China policies put forward by U.S. presidents before and after taking office.

But Mr. Trump is no ordinary candidate, and may not play by the book once in the White House. By bringing the Taiwan factor back into U.S.-China relations, Mr. Trump has reopened Beijing’s most sensitive diplomatic front line, creating potential opportunities and risks that both sides have to manage.

So is Mr. Trump reckless toward China over Taiwan? Not necessarily.

He has recently met with and sought counsel from Henry Kissinger, the man who led President Richard Nixon’s normalization efforts with China in the early 1970s. Mr. Kissinger, respected as a visionary statesman by Chinese leaders, travelled to Beijing last week to meet with President Xi Jinping. While there are many China hawks in Mr. Trump’s camp, Mr. Kissinger as a messenger may play a balanced game to ensure that things do not get out of control between the two most powerful countries on earth.

Wenran Jiang is a political science professor at the University of Alberta and a global fellow at the Woodrow Wilson Centre for International Scholars in Washington.