OPINION: Lessons of history more relevant than ever

Growing hatred and racism toward religious minorities harkens back to our troubled past, says political scientist. 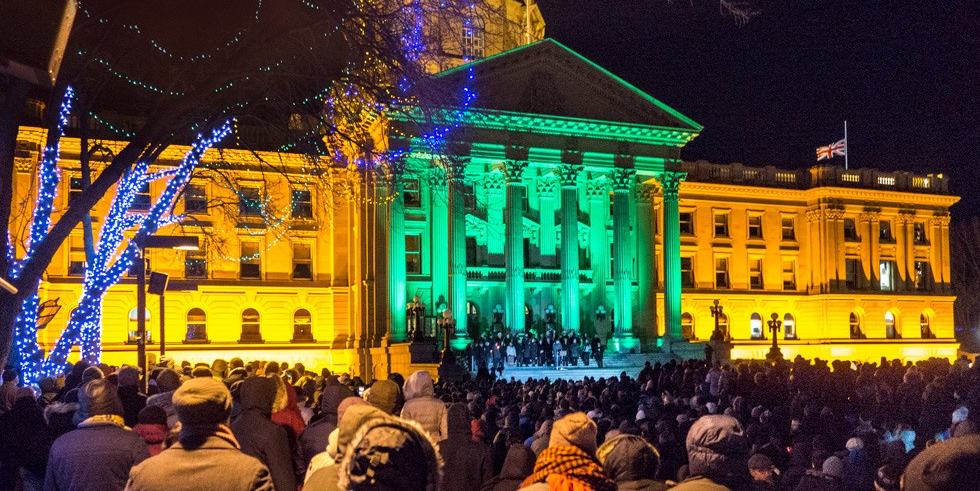 People gather at the Alberta Legislature to hold a candlelight vigil for victims of the Jan. 30 terror attack at a Quebec City mosque. (Photo: Richard Siemens)

By JOHN McCOY and AHMED ABDULKADIR

In James Joyce’s Ulysses his alter ego, Stephen Dedalus, observes, “History is a nightmare from which I am trying to awake.” He says this to a man he dislikes—the headmaster at the school where he teaches: a pompous anti-Semite who rails against Jews as a social problem.

Many of us today can empathize with Stephen’s sentiment as we find ourselves seemingly repeating humanity’s darker moments. Growing hatred and racism directed toward religious minorities, especially Muslims, harkens back to our troubled past.

Even the most casual student of history is familiar with the horrific costs of anti-Semitism. By the early 20th century, anti-Semitism became a heavily rooted ideology in European and North American society. Between the First and Second World Wars, Nazis stoked societal fears and prejudice as they slowly took over the German state.

Industrialist Henry Ford used the media to publish articles on conspiracies to portray Jews as responsible for everything from the Great Depression to the First World War. Like today, a religious minority was vilified by elites and populists eager to take advantage of a fearful public.

The parallels don’t stop there. On the eve of the Second World War, nearly one thousand Jews fled Germany on the St. Louis only to be turned away at Miami, and later Halifax. They represented only a handful of tens of thousands who sought refuge in North America. The U.S. and Canadian governments failed to aid those so acutely in danger and instead held to a narrow vision of self-interest and security.

Forced to return to Europe, a quarter of the passengers would die in the Holocaust. Similarly, today Muslims are targeted by an abiding racism, and are increasingly unwelcome in Western states.

Media personalities, politicians, bloggers and celebrities warn against the dangers of “Islamic terrorism” and the threat posed by Muslim communities that have “failed to integrate.” From Robert Spencer, the founder of “Jihad Watch,” to Richard Spencer, a leader in the emboldened “alt-right” movement, to alarmist Dutch politician Geert Wilders and now President Donald Trump, the message is the same: Islam is an existential threat to Western society, and all Muslims are a potential security threat.

For a growing far-right and populist movement, the answer to this threat can range from Trump’s entry ban for Muslim-majority states, or Wilders’ call for “no more immigration from any Islamic country” or even deportations.

Unsurprisingly, this rhetoric and existential angst has spawned extremism at the fringes. Anti-Islamic and anti-immigrant movements ranging from Soldiers of Odin to Patriotic Europeans Against the Islamisation of the West have spread to both sides of the Atlantic, as has the steady stream of hate in social media and comment sections of media articles.

At the edges, “lone wolves,” whether Anders Breivik or the accused Quebec City shooter, respond with acts of terror to calls for action from the far right. When the most powerful call for war against the other, don’t be surprised when some troubled individuals respond with unrestrained violence.

In multicultural Canada, where so many value newcomers as part of our society and national identity, we must be vigilant against forces of hate and divisiveness that now violently attempt to undermine our strength and unity. Be aware that those violently opposed to Muslims are often equally opposed to inclusion, diversity, and multiculturalism—and anyone who supports it. We are in this struggle together.

While many react to recent events with despair, perhaps ironically by returning to history we can draw out not only nightmares but also dreams for a better tomorrow. In the darkest days of the Second World War, a set of ideals emerged.

Contained in the Atlantic Charter and principles espoused by the United Nations, these ideals were forged out of consensus, a desire that the world would never repeat the horrors of total war and genocide. They spoke to a desire to see a world free of fear and want. However far we seem from those ideals now, it behoves us to remember them, since so many died in their name.

John McCoy is an adjunct professor in political science at University of Alberta. Ahmed Abdulkadir is executive director of the Ogaden Somali Community of Alberta Residents.

OPINION: Lessons of history more relevant than ever