U of A community to commemorate national day of acknowledgement this Friday. 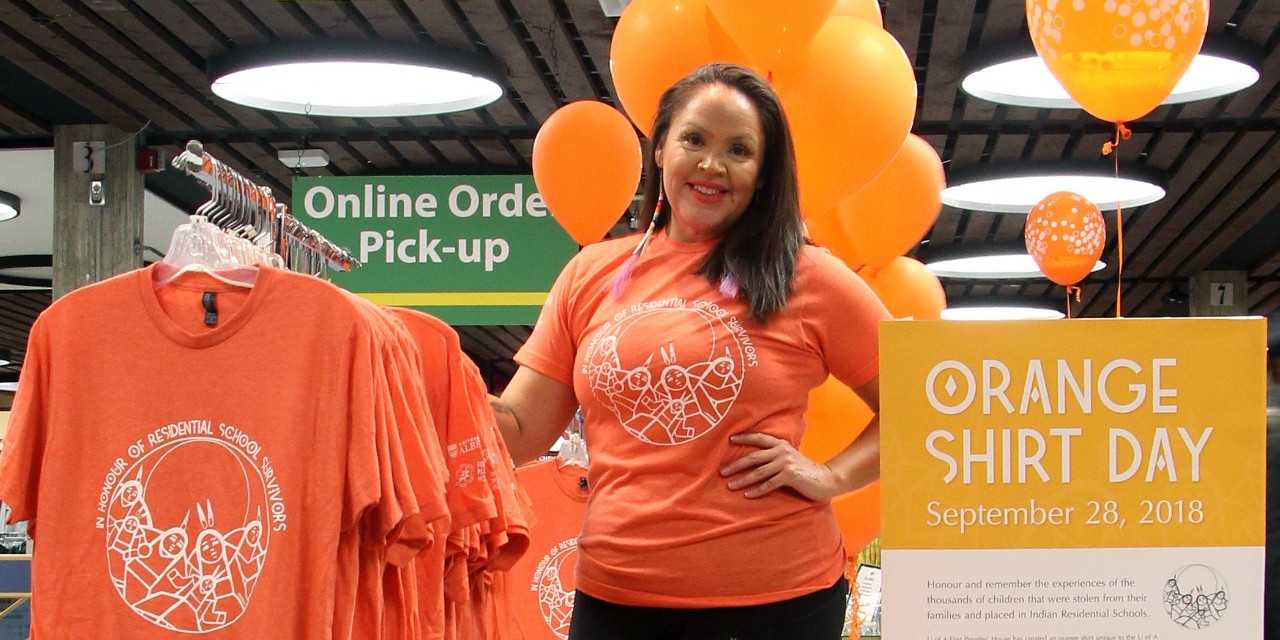 Shana Dion, assistant dean, First Nations, Métis and Inuit students, wears the orange shirt available from the U of A bookstore to help the university community commemorate Orange Shirt Day this Friday. Proceeds from the shirt sales will go toward cultural programming for Indigenous students at the U of A. (Photo: Sarah Coffin)

It’s a day that provides an opportunity for Indigenous and non-Indigenous people to acknowledge the legacy of residential schools, and show their support for those whose lives have been affected by it.

Orange Shirt Day, held annually on Sept. 30 to recognize the month Indigenous children were taken from their parents and sent to residential schools, was first observed in 2013 in Williams Lake, B.C. It was inspired by the story of Phyllis Webstad, who had the orange shirt her grandmother had given her taken away when she first arrived at St. Joseph Mission residential school in September 1973.

The University of Alberta will observe the national day of acknowledgement tomorrow.

“We’re at a place now where we can come together and hear these stories and it doesn’t have to be about blame, shame, hate and guilt,” explained Shana Dion, assistant dean, First Nations, Métis and Inuit students.

Dion has worked for the past three years to raise awareness and engagement with Orange Shirt Day on campus. An intergenerational survivor herself, Dion sees the event as an opportunity to bring the community together.

“It goes back to this conversation of ‘we’re in this together.’ This is a history we tried to hide so deeply, and this is a time where we’re bringing it to light in a way that respects our survivors, and the ones who are still wounded who walk this earth, and honouring their journeys.” she said.

Dion sees the university’s embrace of and participation in Orange Shirt Day activities as indicative of the direction society, and the U of A specifically, is moving.

“I don’t know if this conversation could have happened five years ago; I’m pretty sure it couldn’t have. The U of A has come a long way, and I feel like that’s something we need to acknowledge,” Dion said.

“Orange Shirt Day is huge, and people come from all over campus. One of the answers back when we asked people why they wear orange was simply, ‘I care.’ It can be as simple as that. What we’re doing is the right thing to do at the right time.”

In response to one of the calls to action of the Truth and Reconciliation Commission, the Liberal government announced in August that it will implement a new statutory holiday to mark the legacy of residential schools. One of the dates considered for this holiday is Sept. 30: Orange Shirt Day.

Ultimately, Dion said, Orange Shirt Day is one more opportunity for members of the U of A community to come together in the spirit of reconciliation.

“We’re in a shared space, we’re here to live, learn, laugh and play together, and hopefully love.

That’s reconciliation to me, it’s loving each other,” she said.