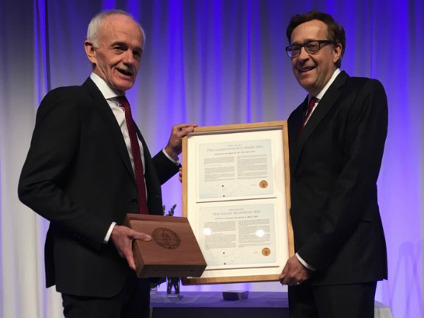 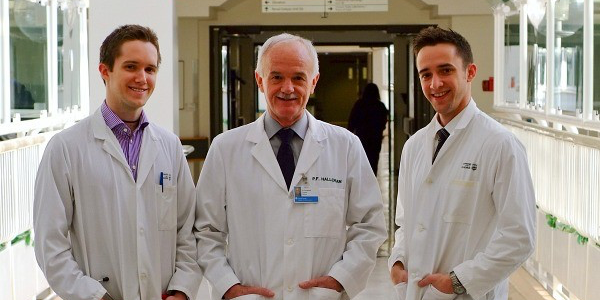 Philip Halloran is flanked by his sons Kieran (left) and Brendan, both of whom are now medical professors at UAlberta. (Photo: Faculty of Medicine & Dentistry)

Hoping for an organ donation is only half of the transplantation story. At the core of the precarious second half—whether the body will accept or reject the new organ—is one man who’s played an extraordinary role in reducing the risk: the University of Alberta’s Philip Halloran.

“I can say categorically, without bias, that Halloran is the most influential individual in transplantation over the past 25 years,” said Bruce Kaplan, professor of medicine at the Mayo Clinic in Scottsdale, Ariz., and deputy editor of the American Journal of Transplantation. “You could list everything from the way he developed histology or a codified system to define what is rejection, to finding the most common cause of graft loss, to being instrumental in the development of major drugs to prevent rejection.”

Watching up to 55 per cent of transplant patients lose their lives as a med student more than 30 years ago, Halloran said he was fuelled by a desire to make a difference.

“There was a poor ability to understand the immune response to organ transplants and we couldn’t control rejections. There were desperate people, and a lot of lives were lost.”

Over the past three decades, his work contributed to the remarkable drop in transplantation failure rates to a mere five per cent, for which he was honoured on Nov. 22 with the 2016 Prix Galien Canada Research Award in Toronto. The accomplishments of the founder of the Alberta Transplant Applied Genomics Centre, director of the Division of Nephrology and Immunology (1987-2002) and Muttart Research Chair in Clinical Immunology at the U of A extend far beyond its borders in the following four ways.

Halloran developed the soon-to-be-licensed Molecular Microscopic Diagnostic (MMDx™) system, a new tool that enables much more accurate diagnoses of transplanted organs that are not doing well, and safer collection of biopsies of those organs.

“As a doctor, you’re looking at reams of data and trying to make a decision about Mr. Smith. We often have difficulty deciding if it is rejection or not, what stage of rejection it’s in and what we can best do to treat rejection. Phil’s work tells us if it’s an infection or a recurrent underlying disease or toxicity to a drug,” explained Jonathan S. Bromberg, division head of transplant surgery at the University of Maryland School of Medicine.

Because the MMDx tool can also be used to determine whether certain drugs are working, it’s poised to support much more personalized, effective treatment for transplant patients.

Currently, centres from around the world are sending biopsies to Edmonton for a histology that far outperforms the conventional histology, which is 40 per cent incorrect in assessing causes of rejection.

“Diagnosis is not a minor part of the solution,” said Halloran. “You can’t hit what you can’t see.”

When an organ is introduced to the body, a natural defense system attacks it; that’s why patients are treated with highly toxic immuno-suppression drugs for the rest of their lives.

To help with the negative side-effects, Halloran led the development of a new companion drug called mycophenolate mofetil or Cellcept™ that improves survival rates and reduces side-effect burden.

It is estimated to add more than one million years of survival for patients worldwide, and is the drug protocol most widely used today when treating transplant patients.

Hunting down the culprit

More than 10 years ago, medical researchers discovered T cells were one of the body’s biggest rejectors of newly transplanted organs.

“Drugs brought them under control but there was something we were missing,” said Halloran, who had noticed, thanks to the MMDx tool, that a mechanism was damaging little blood vessels in the new organs.

“Phil has one of those rapidly thinking minds. He is always doing the old Wayne Gretzky thinking, trying to figure out where the puck will be next. He is also very courageous to stand up and challenge orthodoxy,” said Kaplan.

It took more than 10 years of convincing the establishment, but today Halloran is recognized as defining antibody-mediated rejection (ABMR) as the major mechanism causing graft loss post-transplant.

“We don’t have a way to treat this yet, but now we can see the problem in a quantitative way and support companies conducting new drug trials,” said Halloran.

Halloran proposed and pushed for the development of a peer-reviewed research fund by Roche Pharma with profits from CellCept, which led to the Roche Organ Transplantation Research Foundation. He also established and edited the most successful and highly cited journal in the field, the American Journal of Transplantation.

“Phil influenced the rigour of transplant research bringing of level of veracity and integrity to anything he’s involved in,” said Kaplan. “Phil [is one of] the fathers of the molecular age of transplantation.”