A former UN ambassador, a leading children’s advocate and a prominent businessman will be honoured at fall convocation. 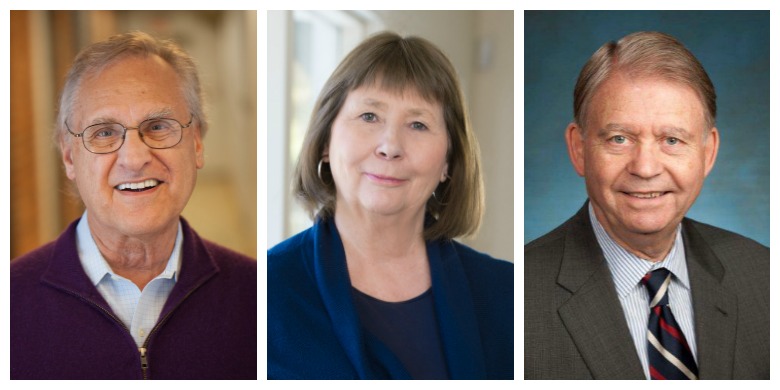 This November, the University of Alberta will bestow honorary degrees on three individuals who have dedicated a significant portion of their energy and talent to uplifting future generations.

"An honorary degree is the University of Alberta's highest honour,” said Doug Stollery, U of A chancellor. “I am delighted our learning community will have an opportunity at fall convocation to celebrate three outstanding Canadians whose leadership and service reflect—in different and inspiring ways—an enduring commitment to the public good."

Stephen Lewis has spent a lifetime as one of Canada’s most courageous and effective international voices in responding to some of the world’s most serious injustices—a commitment that began to take shape over a two-year span beginning in 1959 while he served as a teacher in several African countries.

A desire to help find ways of alleviating suffering and poverty manifested itself in the form of public service, as Lewis was elected as a New Democratic Party member in the Ontario Legislature in 1963. He would go on to serve as leader of the Ontario NDP from 1970-78.

In 1984, Lewis was named Canada’s ambassador to the United Nations, and on that stage he implored the wealthy countries of the world to do more. The world took notice. Lewis led the drafting of the five-year UN program on African economic recovery as well as the first comprehensive policy on global warming. Following his tenure as ambassador, he was named special adviser on Africa to the UN secretary-general and co-ordinated a major study on children affected by armed conflict. Lewis was also appointed by the Organization of African Unity to a Panel of Eminent Personalities to Investigate the Genocide in Rwanda.

It was as deputy executive director of UNICEF that Lewis saw first-hand the plight of people ravaged by HIV/AIDS. He served as UN Secretary-General Kofi Annan’s special envoy for HIV/AIDS in Africa from June 2001 until the end of 2006.

Lewis is the co-founder and co-director of AIDS-Free World, an international advocacy organization that exposes the social ills that underpin and continue to sustain HIV. He is also co-founder and board chair of the Stephen Lewis Foundation. In addition to his charitable work, Lewis is also a professor of distinction at Ryerson University. He was appointed a companion of the Order of Canada in 2003.

Stephen Lewis will receive an honorary doctor of laws degree Nov. 16 at 3 p.m.

Elizabeth O’Neill has dedicated the past 35 years of her life to help ensure every child in the capital region has access to the same opportunities for a bright future.

O’Neill’s journey as a tireless children’s advocate began in 1979 when she became executive director of Big Sisters of Edmonton, which at the time served 50 children and had a budget of $60,000. Over the next three decades, O’Neill would become a driving force in strengthening Edmonton’s charitable sector, overseeing the merger of Boys and Girls Club and Big Brothers Big Sisters of Edmonton and Area. By 2011, O’Neill was heading up the combined organization, which included more than 3,000 volunteers and 100 staff serving more than 5,000 children and youth.

Along the way, O’Neill would work with the Muttart Foundation on a provincewide children’s initiative that, among other things, developed a framework to support the merging of charitable organizations that has been replicated across numerous agencies, locally and across Canada.

She continues to balance the changing needs of children with emerging social issues and economic fluctuations in our society. For her outstanding contributions to the city, O’Neill was inducted into the Edmonton Hall of Fame for Community Service in 2012.

Elizabeth O'Neill will receive an honorary doctor of laws degree Nov. 16 at 10 a.m.

Ralph Young’s exemplary commitment to his family, his city, his province, his profession and his alma mater spans his lifetime.

While completing an MBA at the University of Alberta in 1971, Young was hired by Melcor Developments, the Edmonton-based real estate development company he would eventually lead to national prominence.

Young used his professional success to give back to his community. His business, philanthropy and volunteer efforts have touched almost every facet of Alberta life. Organizations he has served in one capacity or another include the Boy Scouts of Canada, the Winspear Concert Hall Society, the Citadel Theatre, the Edmonton Eskimos Football Club, the Minerva Foundation and the Rotary Club of Edmonton. Young served as president and as a director of the Urban Development Institute of Edmonton, Alberta and Canada. He chaired the Edmonton Centennial Celebration Committee and Carillon Clock Tower Foundation, served on the boards of the Edmonton Police Foundation and the Edmonton Regional Airports Authority, and shared his governance expertise as a director or trustee with the Caritas Health Group, Alberta Heritage Foundation for Medical Research and Alberta Innovates – Health Solutions. His educational philanthropy has focused on his passion for Western Canadian heritage, student opportunities and student mental health.

But perhaps no one has benefited as much from Young’s service as the U of A. Before being named chancellor in 2012, Young served in varied leadership roles at the university, including positions with the Alberta School of Business Advisory Council and the Alberta Business Family Institute, as past president of Alumni Council, and as Alumni Council representative on the U of A Senate and Board of Governors. His service reflects a deeply held belief in the importance of expanding educational opportunities that allow all individuals to reach their personal potential.