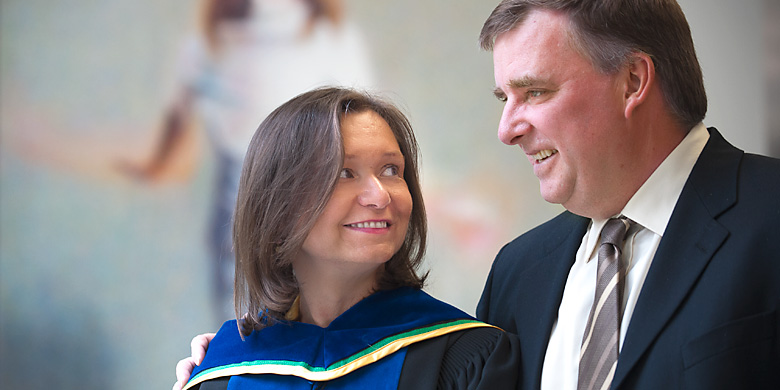 120613-lisaadams-banner
Lisa Adams with her husband Shannon, to whom she dedicated her nursing PhD thesis. (Photo: Richard Siemens)

(Edmonton) There are bumps in the road, bumpy roads and massive sinkholes. Lisa Adams has traversed them all, and she has the physical and emotional scars to prove it. But she also has something else: perspective.

Adams, 44, overcame severe epilepsy that required two major brain surgeries and a lengthy battle with breast cancer on her way to academic excellence with bachelor’s degrees in science and nursing, a master’s degree in community medicine, and now, a PhD in nursing from the University of Alberta.

With that kind of perseverance, she isn’t one to sweat the small stuff.

“There are so many people out there going through so much. If you can get up in the morning and you can eat, and you can walk, and you can talk, you’re having a good day,” said Adams, an expert in mental health and addictions.

It’s a lesson she learned early and often, starting at age 10 with a blow to the head from standing too close to a swing set at a playground in her native Newfoundland and Labrador.

Aside from headaches, the youngster didn’t give a thought to long-term damage until a year later, when she had a “funny feeling in her belly.” She started suffering brief staring episodes, which doctors later determined were seizures caused by a buildup of scar tissue in her skull.

That’s when Adams had her first brain surgery, a partial temporal lobectomy in which doctors filed pieces of the skull and cut away parts of her brain. Afterward she felt better—for awhile, anyway.

“You’d be afraid to go outdoors”

In 1993, two years into nursing school, Adams again started suffering seizures, this time worse in severity and frequency—five or six a day. She lost her job as a personal care attendant, lost her driver’s licence and was removed from nursing school in Newfoundland out of fears she was a safety concern if she blacked out on the hospital floor.

Epilepsy took a physical and emotional toll, causing her to live like a shut-in.

A second temporal lobectomy in Montreal, this time aided by the advent of MRI technology, finally ended her seizures for good.

“It was like a breath of new life,” she recalls. “You don’t have that anxiety because you're afraid something is going to happen. No words can describe how freeing that is.”

Although she was forced to start her nursing studies anew, Adams embraced life with renewed vigour. She married, completed two more degrees and took up jogging and gardening. In 2005, she decided to enrol in the University of Alberta’s nursing PhD program.

“PhD was the ultimate”

“For me, the PhD was the ultimate. I think I almost had to show myself and to show the world and my friends and family that, in spite of everything I went through, I can do my PhD. Lisa can set her mind to do anything.”

But en route to Edmonton for her residency in the spring of 2006, Adams experienced a new setback: a lump in her breast. Once she was in Alberta, doctors found several cancerous tumours—news she was forced to absorb alone.

“They knew I was from Newfoundland, that I was by myself,” Adams recalls. “I was crying so much that the nurse was holding my hand throughout the test.”

After undergoing surgery, Adams returned to Newfoundland, where she received several rounds of chemotherapy so aggressive she was hospitalized for every treatment. The last time, doctors halted treatment after she passed out in the emergency room.

“They told me my body just couldn’t take it anymore,” she recalls. “After all of that I thought, it’s definitely not the cancer that kills you, it’s the treatment.”

Adams credits her husband Shannon for helping through those darkest of days.

“He was a fabulous individual. I’ve actually dedicated my thesis to my husband for that journey,” Adams said, choking back tears. Their relationship, and her studies at the U of A, helped her persevere.

“I kept going with my courses, I didn’t stop studying. I needed something to preoccupy my mind.”

But Adams’ battle didn’t end there. She had a mastectomy, hysterectomy and tonsillectomy to ensure the cancer didn’t return, along with three reconstructive surgeries. She also suffers from “chemo brain,” a side-effect of chemotherapy associated with forgetfulness and memory loss.

But in spite of all her battles, Adams didn’t lose sight of her end goal: a PhD. Nursing professor Colleen Norris was Adams’ co-supervisor but did not realize the seriousness of her health issues until she travelled to Newfoundland to help with analytical work for her PhD dissertation.

“That’s the first time I heard about any of these issues, when we’d go for walks as a break in between. I was overwhelmed. How has anybody succeeded through all of this?” Norris said. “It speaks to her fortitude—I’m just carrying on, this isn’t going to stop me.”

Norris said she’s never met another student who has applied for research grants and awards, and submitted manuscripts like Adams.

“She really puts herself out there all the time. Her outlook on life is anything can happen, and is constantly asking questions, trying to learn. She’s a real scholar.”

Now cancer-free, Adams is enjoying a sense of renewal, running 30 to 40 kilometres a week, spending time with her husband, writing research articles, serving on the board of directors for the Newfoundland chapter of the Canadian Cancer Society and contract teaching at Athabasca University.

Adams recently received an offer to publish a book about mental health in the workplace. She also hasn’t ruled out writing about her own life experiences.

“For myself, maybe someday I will write about my life and everything I’ve been through and overcome. I certainly think there could be a message, of inspiration. I feel very proud of my accomplishments, and you know, I tell people—don’t sweat the small stuff.”