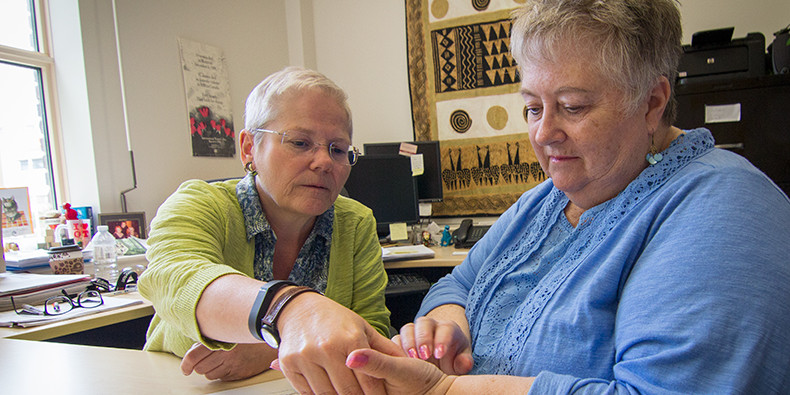 (Edmonton) There was a time, back in Nancy Cheyne’s youth, when she combined the poise and grace of a ballerina with the daring and grit of a barrel racer. When she wasn’t pursuing either of those pastimes, she bred sheepdogs, often spending hours on her feet grooming her furry friends at dog shows.

All that seems like a lifetime ago. After 15 years of living with chronic lower-back pain, Cheyne, 64, can’t walk from the disabled parking stall to the elevator at work without stopping for a rest. She eats mostly junk food because it hurts too much to stand over the stove and spends most of her spare time in a recliner with a heating pad.

Despite pain patches and opiates, Cheyne often lies awake at night in the same recliner—sleeping in a bed is like torture—after waking every couple of hours in excruciating pain.

“Pain affects everything I do,” says Cheyne. “The chronic ongoing lower-back pain, it’s all the time.”

“What we saw with this pilot is that it appears self-shiatsu may help your body to prepare for sleep and help you stay asleep for longer periods.” —Cary Brown, Rehabilitation Medicine

Researchers at the University of Alberta are exploring the traditional Japanese massage practice called shiatsu as a potential treatment to help Cheyne and others like her find slumber—and stay asleep. A small pilot study followed nine people living with chronic pain as they self-administered shiatsu pressure techniques on their hands at bedtime.

“We know that sleep involves both physiology and learning. You don’t just flip a switch and go to sleep,” says Cary Brown, an associate professor of occupational therapy in the Faculty of Rehabilitation Medicine. “What we saw with this pilot is that it appears self-shiatsu may help your body to prepare for sleep and help you stay asleep for longer periods.”

For the study, occupational therapy and physical therapy students were taught the basic shiatsu techniques and in turn trained participants, who reported falling asleep faster—sometimes even while administering treatment—and slept longer after two weeks and eight weeks of treatment, compared with a baseline measurement.

Cheyne spent about 10 to 15 minutes every night performing the treatments and found that instead of waking up every 45 or 60 minutes, she could stay asleep for 1.5 to two hours. Given she hasn’t felt well rested in more than a decade, every minute counts and she still keeps up her treatments months after the pilot concluded.

“Usually within a few minutes of doing the pressure treatments, I’m gone—asleep,” she says. “Sometimes I can’t even finish, I just go out.”

Brown cautions it’s impossible to draw strong conclusions about the pilot given the small sample size, self-reported nature of the data and limitations in gender; however, she believes the results are promising enough to warrant further study.

Brown also notes there’s a difference between people with pain passively going to a therapist versus taking control of their sleep problem in the form of self-administering hand shiatsu, which requires more mental effort—a theory of cognitive attention that she would like to explore further. Hand shiatsu, when self-administered, takes some concentration because our minds cannot focus on two demands at one time, she says, making it less likely that negative thoughts would interfere with sleep.

“One of the barriers to falling asleep for people who have pain is they worry about what’s going to happen and while you’re laying there you’re thinking about all these negative things, it occupies your attention,” Brown says. “This relates to research on attention in cognitive theory.”

The pilot was an attempt to explore low-cost, unintimidating alternatives to drugs to help people with chronic pain fall asleep, noting medication is seldom recommended for long-term use. Brown collaborated on the project with shiatsu therapist Leisa Bellmore of the Artists’ Health Centre at Toronto Western Hospital and U of A colleague Geoff Bostick.

For patients suffering from chronic pain due to low-back and other musculoskeletal injuries, the only thing that matters is finding results that work, Brown says. Not only does sleep deprivation lower a person’s pain threshold, it also affects their health, from increased risk of obesity, diabetes, cardiovascular disease and traffic accidents.

More research is needed in foundational areas to break the cycle, she adds.

The research team’s findings were published in the Journal of Integrative Medicine.