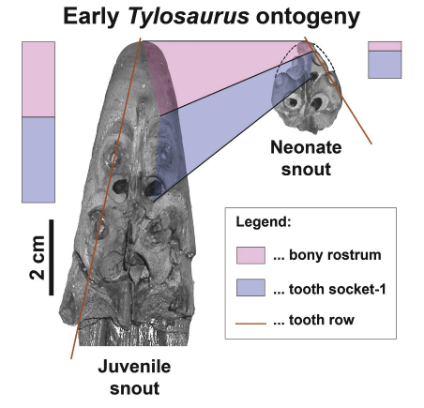 The baby Tylosaurus (right) was hard to identify because it lacks the characteristic snout seen in older specimens. (Illustration: Takuya Konishi, University of Cincinnati)

World’s smallest Tylosaurus fossil sheds new light on how the ancient marine predator developed its fearsome snout and teeth as it matured. 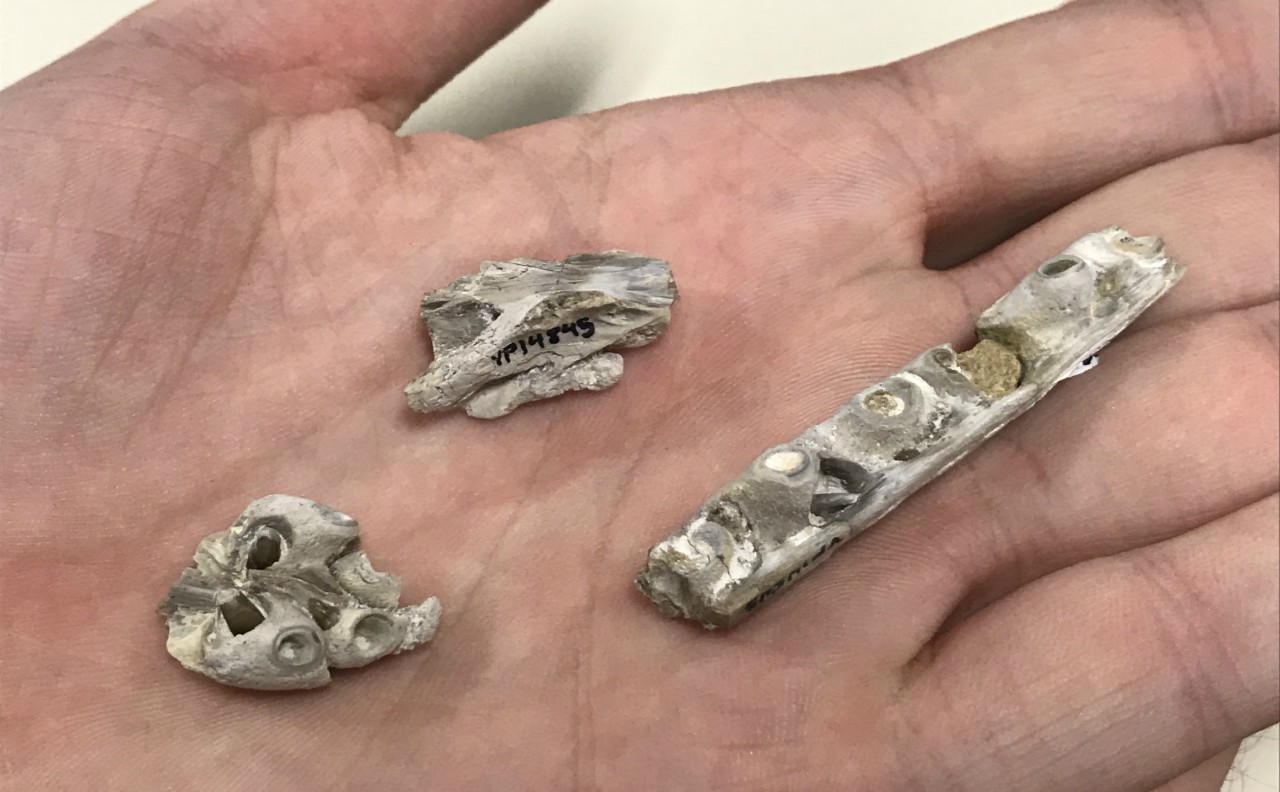 The tiny fossils of the world's smallest Tylosaurus specimen fit in the palm of a hand. The discovery of the 85-million-year-old specimen yields new insights into how the ancient marine reptile developed as it grew from infancy to adulthood. (Photo: Christina Byrd, Sternberg Museum of Natural History)

An 85-million-year-old fossil of a baby “sea monster” unearthed from a chalk formation in Kansas gives scientists a clearer idea of how ancient marine reptiles developed from infancy to adulthood.

The fossil of a newborn Tylosaurus—a predator related to the mosasaur made famous in the Jurassic World movies—is the smallest specimen of the creature ever discovered, according to paleontologists Takuya Konishi and Paulina Jiménez-Huidobro, who conducted the research during their PhD studies in the University of Alberta’s Department of Biological Sciences under the supervision of Michael Caldwell.

The Tylosaurus specimen died shortly after it was born, making the fossil extremely difficult to identify because it had not yet developed the characteristic snout and teeth of adult tylosaurs. As adults, the predatory reptiles could grow up to 13 metres long, with powerful jaws and large teeth.

“Having looked at the specimen in 2004 for the first time myself, it took me nearly 10 years to think outside the box and realize what it really was—a baby Tylosaurus yet to develop such a snout,” said Konishi, now a faculty member at the University of Cincinnati and lead author on the study.

By comparing the baby fossil with existing specimens of older tylosaurs, the researchers discovered Tylosaurus develops its snout between birth and the juvenile stage, something previous studies had not determined.

“We have known for some time that these remains were the rarest of the rare—babies or just freshly born sea monsters,” said Caldwell, co-author on the study. “I consider this to be success of the finest kind. Great science, great students, and careers made at the same time.”

The study, “The Smallest-Known Neonate Individual of Tylosaurus (Mosasauridae, Tylosaurinae) Sheds New Light on the Tylosaurine Rostrum and Heterochrony,” was published in the Journal of Vertebrate Paleontology.