Ancient lizard’s long, crocodile-like snout suggests it carved out a niche in a competitive marine ecosystem. 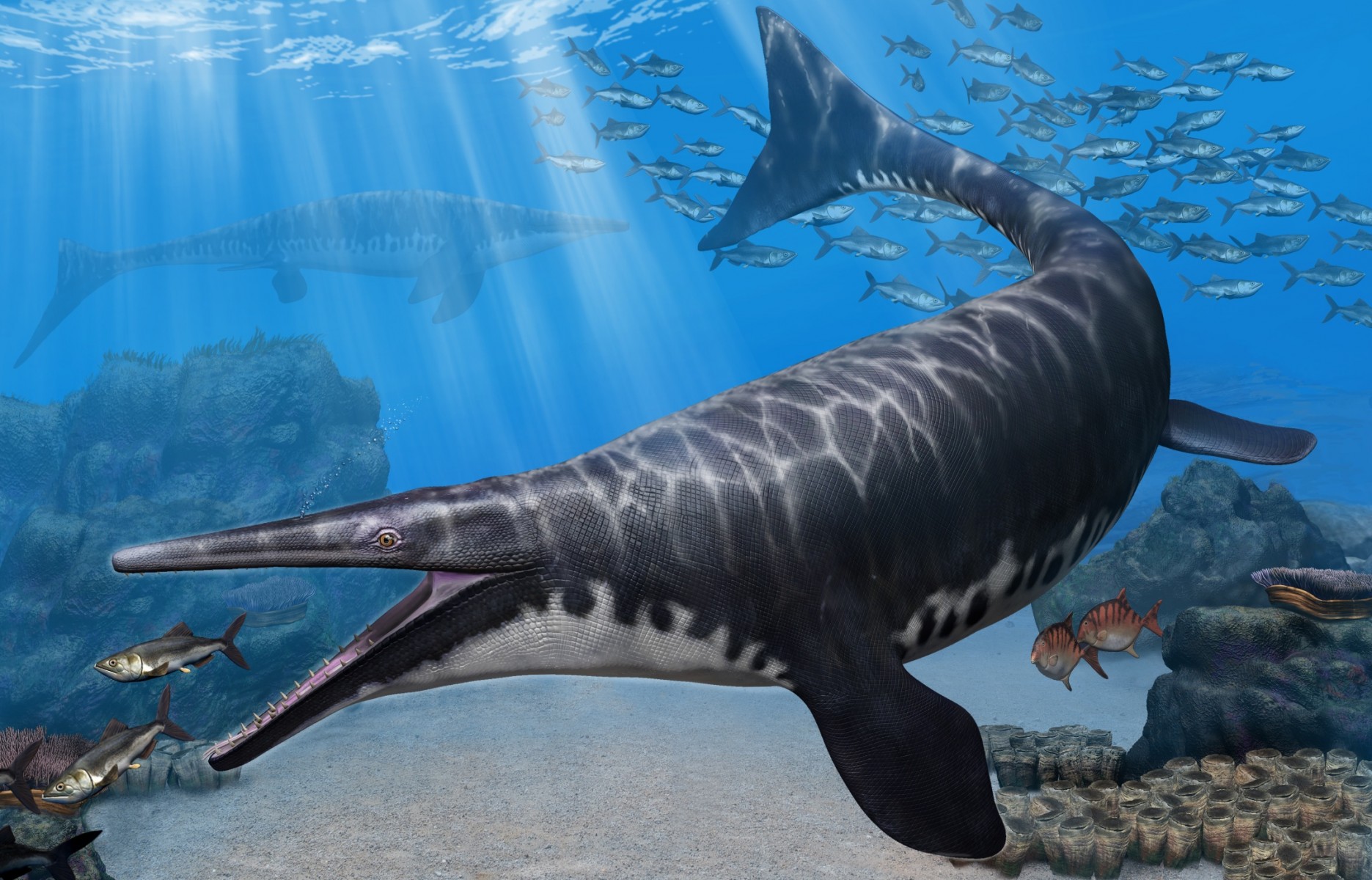 Artist's rendering of Gavialimimus almaghribensis, a newly discovered species of mosasaur that ruled the seas of what is now Morocco some 72 to 66 million years ago. (Illustration: Tatsuya Shinmura)

A new species of an ancient marine reptile evolved to strike terror into the hearts of the normally safe, fast-swimming fish has been identified by a team of University of Alberta researchers, shedding light on what it took to survive in highly competitive ecosystems.

Gavialimimus almaghribensis, a new type of mosasaur, was catalogued and named by an international research team led by master’s student Catie Strong, who performed the research a year ago as part of an undergrad honours thesis guided by vertebrate paleontologist Michael Caldwell, professor in the Faculty of Science, along with collaborators from the University of Cincinnati and Flinders University.

More than a dozen types of mosasaur—which can reach 17 metres in length and resemble an overgrown komodo dragon—ruled over the marine environment in what is now Morocco at the tail end of the Late Cretaceous period between 72 and 66 million years ago.

What differentiates Strong’s version, however, is that it features a long, narrow snout and interlocking teeth—similar to the crocodilian gharials, a relative of crocodiles and alligators.

Strong said this discovery adds a layer of clarity to a diverse picture seemingly overcrowded with mega-predators all competing for food, space and resources.

“Its long snout reflects that this mosasaur was likely adapted to a specific form of predation, or niche partitioning, within this larger ecosystem.”

The fossilized skull of the newly identified mosasaur features a long, narrow snout and interlocking teeth, which suggest it adapted to hunt particular prey in a highly competitive ecosystem. (Photo: Catie Strong)

Strong explained there is evidence that each species of the giant marine lizard shows adaptations for different prey items or styles of predation.

“For some species, these adaptations can be very prominent, such as the extremely long snout and the interlocking teeth in Gavialimimus, which we hypothesized as helping it to catch rapidly moving prey,” she said.

She added another distinctive species would be Globidens simplex—described last year by the Caldwell lab—which has stout, globular teeth adapted for crushing hard prey like shelled animals.

“Not all of the adaptations in these dozen or so species are this dramatic, and in some cases there may have been some overlap in prey items, but overall there is evidence that there's been diversification of these species into different niches,” Strong noted.

Alternatively, the main contrasting hypothesis would be a scenario of more direct competition among species. Strong said given the anatomical differences among these mosasaurs, though, the idea of niche partitioning seems more consistent with the anatomy of these various species.

“This does help give another dimension to that diversity and shows how all of these animals living at the same time in the same place were able to branch off and take their own paths through evolution to be able to coexist like that,” she said.

The remains of the G. almaghribensis included a metre-long skull and some isolated bones. There was nothing to explain the cause of death of the specimen, which was uncovered in a phosphate mine in Morocco that is rich in fossils.

“Morocco is an incredibly good place to find fossils, especially in these phosphate mines,” Strong said. “Those phosphates themselves reflect sediments that would have been deposited in marine environments, so there are a lot of mosasaurs there.”