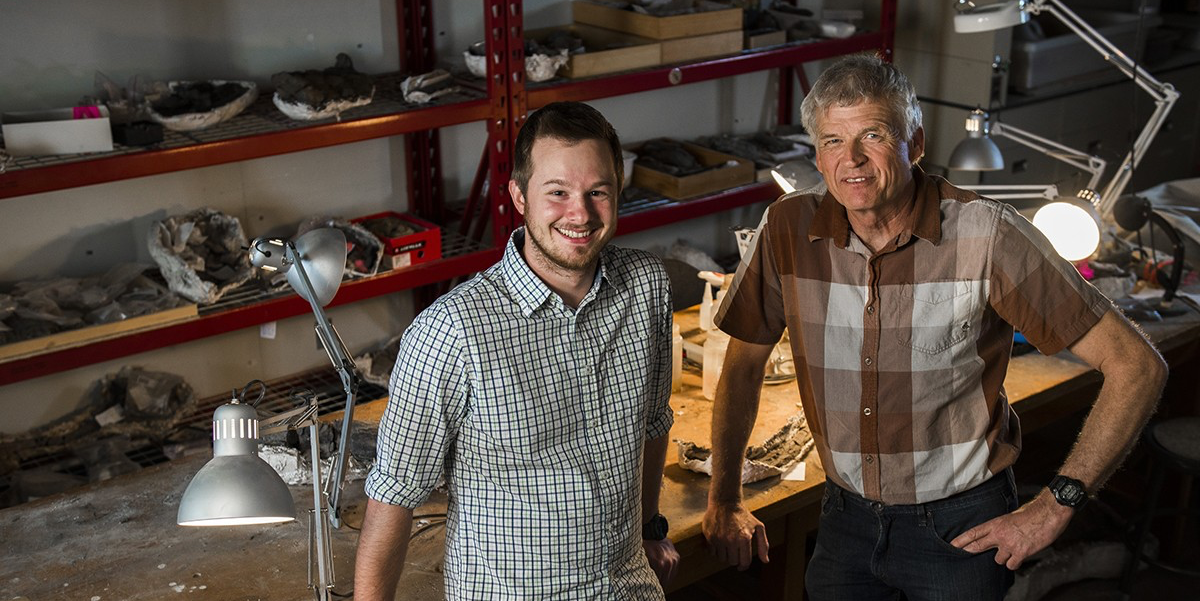 Following a discovery in 2015 in Alberta’s Dinosaur Provincial Park, Greg Funston puzzled for two years over a mysterious bone trying to identify the species of animal—as well as the part of the body—the bone belonged to.

“It confused us for a long time, because it’s such an unusual bone,” said Funston, a UAlberta PhD student in paleontology. “There are a lot of features to it, but none of them are like anything we’ve ever seen before.”

Funston initially thought the bone might belong to either a theropod dinosaur or a prehistoric bird. After exhaustive comparison to other known species and insight from pterosaur expert and UAlberta alumna Liz Martin-Silverstone, the team knew the bone was part of the pelvis that belonged to the pterosaur species, an ancient non-dinosaurian reptile species typically associated with flight.

They further identified the pelvis as belonging to an azhdarchid, a group of oddly proportioned pterosaurs with gigantic heads, long necks, and short wings proportionate to their body size.

Funston explained that the features of the pelvis support previous suggestions that azhdarchids were well adapted for walking on land. Despite having long forelimbs and wings, on the ground, most of the propulsion would have come from their hind limbs, much like most land animals.

Further evidence was provided by muscle scarring on the bone, which indicated the animals would have had strong musculature to support their land transport. Their ancestors, by comparison, probably spent very little time moving on the ground.

“If you compare this muscle reinforcement to other pterosaur pelvises, these azhdarchids are an order of magnitude stronger. Though they would have been able to fly, that’s not typically what they were doing. The shape of the pelvis tells us that this animal was better built to deal with forces on the ground,” said Funston. …more/

He speculated that, unlike its flying ancestors, these pterosaurs likely adapted to land travel to accommodate not only larger bodies but also “terrestrial stalking,” hunting their prey by sticking close to their food source.

Funston said he and his colleagues, led by his PhD supervisor, world-renowned paleontologist Phil Currie, UAlberta professor and Canada Research Chair in Dinosaur Paleobiology, are subtly shifting the focus of their field research to rare animals like pterosaurs. Notoriously hard to find because their bones are so fragile and therefore don’t preserve as easily, Funston said enhanced recognition is showing that answers to pterosaurs are more easily accessible underfoot than previously suspected.

“The first pterosaur pelvic material from the Dinosaur Park Formation (Campanian) and implications for azhdarchid locomotion” appears in Facets, a new open-access journal from Canadian Science Publishing out of the National Research Council Press.