Curiosity about prehistoric insects led Emily Moore to two professors who sparked her passion to get others excited about science. 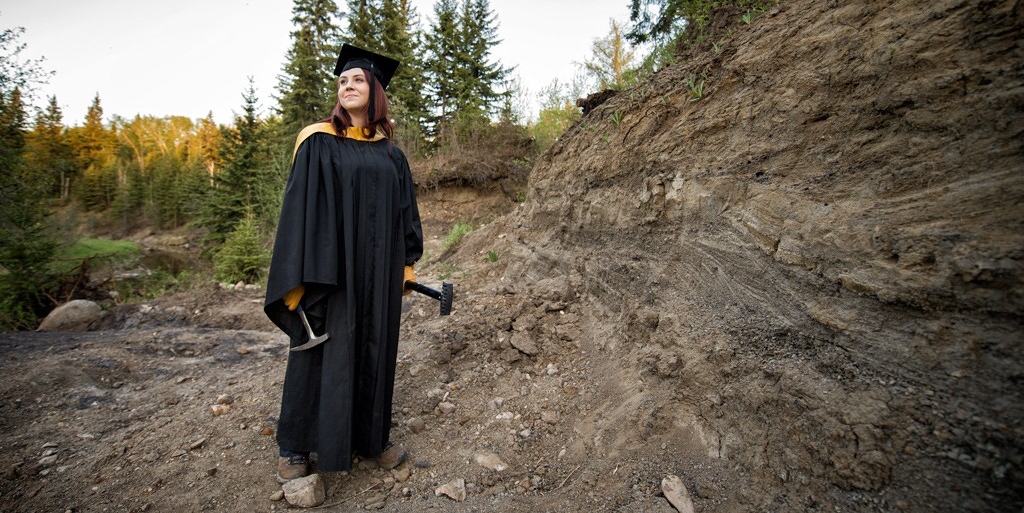 (Edmonton) Every year, a squadron of dragonflies and their voracious appetites descend on Edmonton in the nick of time to rescue humanity from the carnage that another yearly dose of mosquitoes has wrought. In these parts, they’re as close to superheroes as it gets.

That reverence would be put to the test, however, were we living 300 million or so years ago.

“Everybody likes dragonflies, but I don’t know if you would like one with a wingspan of a metre getting into your house—it might cause some serious damage,” says Emily Moore of the Paleodictyopteroidea, a long-extinct ancestor of today’s dragonfly that was as big as a Canada goose, had a beak and happens to be her favourite paleolithic insect.

Moore’s affection for old insects wasn’t always so. It began innocently enough, with an early fondness for geology and biology, which made paleontology a natural choice. These early leanings were reinforced when she learned her hometown university offered one of the world's best paleontology programs.

“I looked into going to the U of A and realized I would be getting a well-rounded and full education in paleontology, and thought it would be really awesome to be part of that,” said Moore, who graduates this week with a bachelor of science degree in paleontology.

Of course, when people think of paleontology at the U of A, the first things that come to mind are rooms full of T-Rex bones and courses like Dino 101. Hidden in the shadows of the imagination-monopolizing Jurassic giants, however, are the relatively smaller but vitally important and numerous invertebrates—and those who teach about them.

“Early on, I found I was a lot more interested in physiology than anything else,” said Moore, remembering running her finger down the long list of options she had to choose from. “I thought, ‘I don’t know anything about insects, and they’re kind of gross, but I will give them a try.’”

So many bugs, so little time

For his part, Sperling says he sets out to arm his students with approaches and techniques for coping with the overwhelming diversity.

“So many names, so many bugs, so little time, but if you approach it from an operational point of view, one can use methods to help cope with the confusion,” he said. “After that, the bugs basically carry the day, and I’m the one giving a guided tour to the highlights—the best of the best.”

Sperling says he uses media to show how biological research has ramifications in everyday life, then uses that to get students to try answering the deep questions so many of them have: Who am I? Why I am I here? What is the meaning of life?

“I want to leave them with a sense about where in the universe they can make a difference and leave them with an upbeat sense of optimism of the potential for a rich and meaningful life doing science,” says Sperling. “A professor should be encouraging students to action—not to sitting back and absorbing, but translating that into action.”

Moore took that charge and a good dose of encouragement, quite literally, to the ends of the Earth. In December of 2013, thanks in part to a reference letter from Sperling, Moore spent two weeks in Antarctica with Students on Ice getting a second-to-none international education experience.

Moore’s Antarctic experience happens to fall in line with the teaching philosophy of her paleobiology professor, Earth and atmospheric sciences researcher Leighton, which revolves around the best way to learn science.

“One thing that I realize—and this is partly from my own experience—that is really important when you are doing science is that students really need to do it. They have to have that hands-on opportunity,” said Leighton, whose research integrates modern and fossil data to address ecological questions. “I want to build up their tool box but I also want them to understand, ‘Oh, I’m in this kind of a situation, what tool do I need to use at this point?’”

Communicating a passion for science

One of those tools, Leighton notes, is communicating.

“The final step of science, and it is often overlooked, is disseminating what we have learned to both the scientific community and to the public,” he said, adding Moore’s abilities as a scientist and a communicator made her a perfect fit for Leighton’s lab working on an in-depth directed study looking at changes in predation scars in a clam-like brachiopod fossil through a mass extinction.

Moore says she didn’t have to be out of the classroom very long to appreciate how her professors communicated their passion for paleontology along with the subject matter.

“When being taught by people who are that passionate, you can’t help but learn more and be passionate about these things,” said Moore, who says she would like to return the favour and find a role that helps others get excited about science. “In interesting ways, they showed me how invertebrates are unique and how they do such strange and wonderful things. These are sort of the forgotten animals of the world—they’re kind of the underdog, and I kind of go for the underdog.”

For now, Moore’s affinity for the long shot is what will send her up Mount Kilimanjaro in August as a part of a fundraising effort to build a school for an orphanage in Africa.

“My thinking is that I am privileged enough to be graduating with a wonderful education, I might as well give back and try to help others achieve a life-changing education as well.”