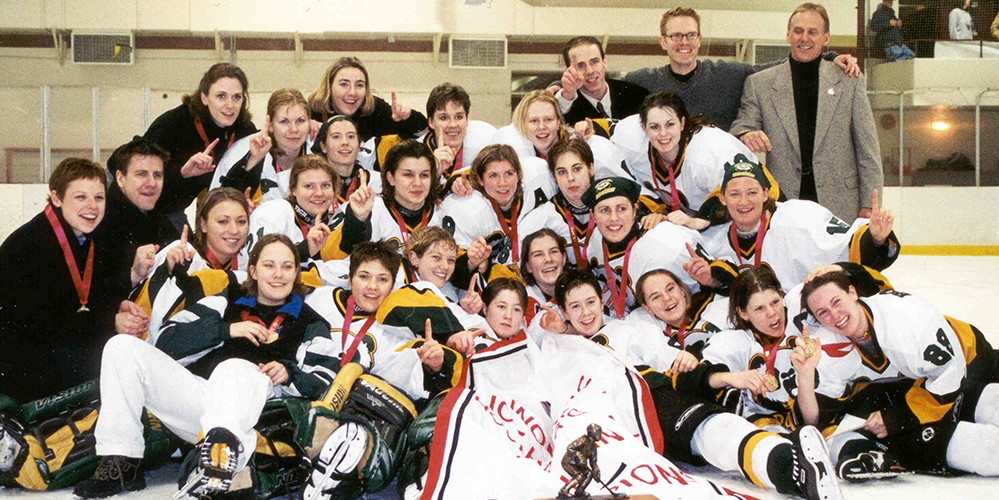 The University of Alberta Pandas hockey program is celebrating 20 years on the ice with a fundraising event on September 30th at the Edmonton Expo Centre. The event will not only celebrate a pioneering legacy of women’s hockey, but will also lay the ground work for decades more success through the official introduction of the Edmonton Female Athletic Club, a junior Pandas hockey club, and by raising funds that will be directed towards scholarships for the best Edmonton and area youth female hockey players.

The Pandas hockey program is the most successful Canadian university women’s hockey program ever with seven national championships and 12 conference banners. Off the ice, the program recently spearheaded change in CIS by helping usher in the ‘CIS Women’s Hockey Pilot Project’, which allows CIS women’s hockey teams to offer scholarships in excess of tuition in books in an effort to keep and develop the best female Canadian hockey players in Canada. Women’s hockey is currently the only CIS sport to allow scholarships akin to “full ride” scholarships.

Also fueling the future will be the first ever female only hockey club, the Edmonton Female Athletic Club, which the Pandas partnered with Hockey Edmonton to create. The club will create more elite female hockey development opportunities for Edmonton and area female hockey players and coaches by focusing on the Female Midget AAA as well as the Bantam and Midget Elite programs. The club will support a comprehensive player development structure that starts with grassroots programming, builds to the Team Alberta program – all of which provide a sound foundation for post-secondary programs.

Howie Draper, the only head coach the program has known since 1997, participated in a Q & A session with Golden Bears and Pandas Athletics to look back on 20 years of Pandas hockey.

GBP: What is the significance of the dinner? Why is it important to the Pandas and women’s hockey in Alberta?

HD: I learned it from Clare Drake, and one of the incredible things about him was that he was always looking to the future. As one of his players, and later, as someone who was mentored by Clare, I never had the sense that he was dwelling on his success or failures. He was always keen on finding ways to be better. This innovation and commitment to continual learning compelled people to follow him and buy into the ‘Golden Bear’ way of doing things. Through studying him, I've learned that we can never be satisfied with what we've earned to this point. It's important to recognize the success that we've had, and the young women that have contributed to that success, but the most important message that I hope the dinner will bring is what our alumni have accomplished since their time as a Panda came to an end. The young leaders that are joining us on stage all made a decision to forge forward and do great things in their lives and in their communities. That's really what makes this dinner significant.

GBP: Looking back on 20 years of Pandas hockey, what do you think is the most important thing the program accomplished in that time?

HD: Looking back on 20 years, I think the most important thing the program has accomplished is that the girls in the program were able to establish and maintain a reputation of strength for women’s hockey in Western Canada at the University level. Up to that point, the perennial powers in women’s hockey were based in Ontario and Quebec.

On top of that, and perhaps more importantly, the program, university and sport were able to provide a fertile environment that fostered growth in the young women who are now doing great things in the community both inside and outside of hockey.

GBP: How exciting was it 20 years ago to be part of something new, something innovative, to be a leader in women's hockey?

HD: It was very exciting time. Still is exciting! When we started, women’s hockey was an alternative sport for girls and young women. It’s much more main stream now than it ever was. I would say that the program, along with its success and subsequent attention, might have contributed to a bit of that on a local level. Of course, the main driver of the acceptance of women’s hockey was the introduction of the sport into the 1998 Winter Olympics.

Every year the game gets better. It’s faster; the players are more skilled, the coaching and team play is better, so it’s still very exciting to see the growth of the game, even 20 years later.

GBP: What were those early years like? The Pandas were a dominant program, so not only was it probably exciting to be part of something new, but also exciting because of the championship success.

HD: When we began the program in 1997, I had never dreamt that we would have the success that we did. I only hoped that I might be able to contribute positively to young people’s lives like Clare Drake and Billy Moores, the fathers of hockey at the U of A, did for people like me once upon a time. The success was a nice by-product, and really it shows that when you do your best to focus on helping young hockey players grow, the winning comes as a result of that.

GBP: How has your approach to coaching women's hockey changed in 20 years?

HD: I’d like to say that I’m a better coach now than I was 20 years ago, but it’s hard to say. I feel like I’m still learning and every year there are things that I feel I’ve done well and things I wish I had done better. Its cliché, but I feel that world is changing, just in terms of how new players come into the program and how they fit into the team environment, what their goals and needs are, and how they respond to failure and success. Everything is continually evolving, so my biggest challenge is attempting to adapt my style to into the next generation of players. Some days I feel like I hit the mark, and some days I feel like I’m out in left field somewhere.

GBP: What does 20 years of Pandas hockey mean to you?

HD: Great pride in having been a contributing member to the tradition of excellence at the University of Alberta, Golden Bears and Pandas Athletics, as well as having shared the journey of each of the 20 teams, all of the players, coaches, staff since 1997.

The Pandas hockey program will celebrate 20 years on the ice this Friday, September 30 with a fundraising dinner at the Edmonton Expo Centre. For more information please visit the event website.