Rookie defender scores in double overtime to give Alberta its first national championship since 2010. 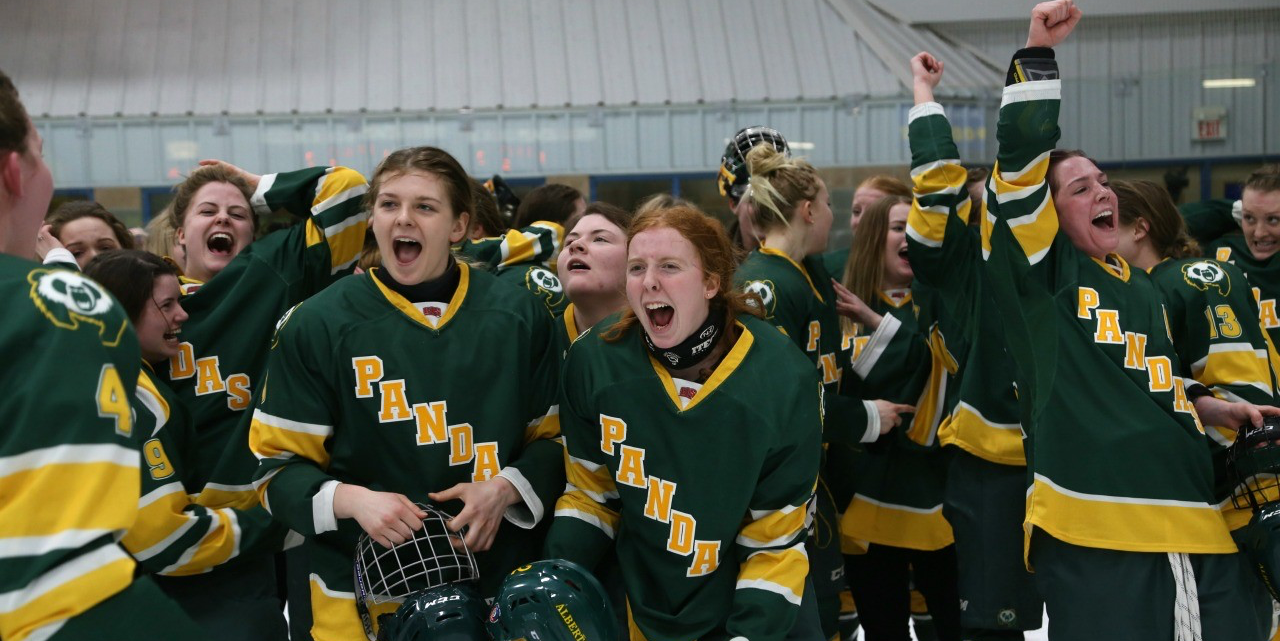 A thrilling overtime win against the McGill Martlets at the U SPORTS Women’s National Hockey Championship this past weekend cemented the University of Alberta Pandas hockey program as the greatest of all time.

The teams were deadlocked at one midway through the second overtime period when rookie defenceman Taylor Kezama intercepted a wayward breakout pass and blasted home the winner off a Martlets defender and through the legs of netminder Tricia Deguire.

It was the Pandas’ eighth national women’s hockey championship, more than any other team in Canada.

“This team is remarkable,” said Alberta head coach Howie Draper, who has been at the helm of the Pandas for all eight Golden Path trophies. “They work so hard, sacrifice themselves, and they deserve this.”

Few had tabbed the sixth-ranked Pandas, who fell to UBC in the Canada West final, to go all the way. But the lessons Alberta learned in Vancouver paid dividends when the going got rough at the national championships in Napanee, Ont.

“The scar tissue that was formed after that weekend helped us here,” said Draper. “We got down twice against Concordia and were able to come back—we knew that we had to be better, stronger and more resilient.”

“It was tough, McGill is such a strong team and there (were) many times where that game maybe could’ve been over earlier,” he said. “Fortunately, we got great goaltending from Post, as we’ve had all year long, and it just took one shot—we got it.”

Post, a native of nearby Chelsea, Que., made 40 saves en route to the victory.

“All I had in my head was, ‘This is your last game as a Panda, just stop the puck,’” said Post, who was named tournament MVP and, along with teammate Alex Poznikoff, first team all-star. “To finish it off here in (Napanee), close to home, is unbelievable—this is what I’ve been dreaming of since my first year as a Panda. There’s no words for it.”

After a scoreless first period, Amy Boucher lit the lamp to give the Pandas a 1-0 lead. While on a 1-on-1, Boucher used the defencemen as a screen and beat Deguire with a far-side snapshot.

However, the fourth-ranked Martlets roared back to tie the game early in the third, setting the stage for Kezama’s heroics.

“It didn’t feel real at first; I was like, ‘Did this go in?’” laughed Kezama, whose goal gave the Pandas their first championship since 2010. “My excitement level went through the roof. It’s the most amazing feeling I’ve ever had in my life.”

The Pandas opened up their championship bid with a 2-1 quarter-final win over third-ranked Saint Mary’s Mar. 17 and a 6-2 semifinal victory over seventh-ranked Concordia the next day.