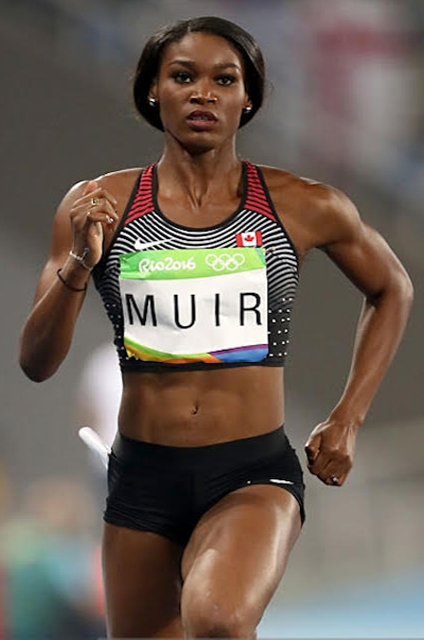 Carline Muir competing at the 2016 Olympics in Rio. (Supplied photo) 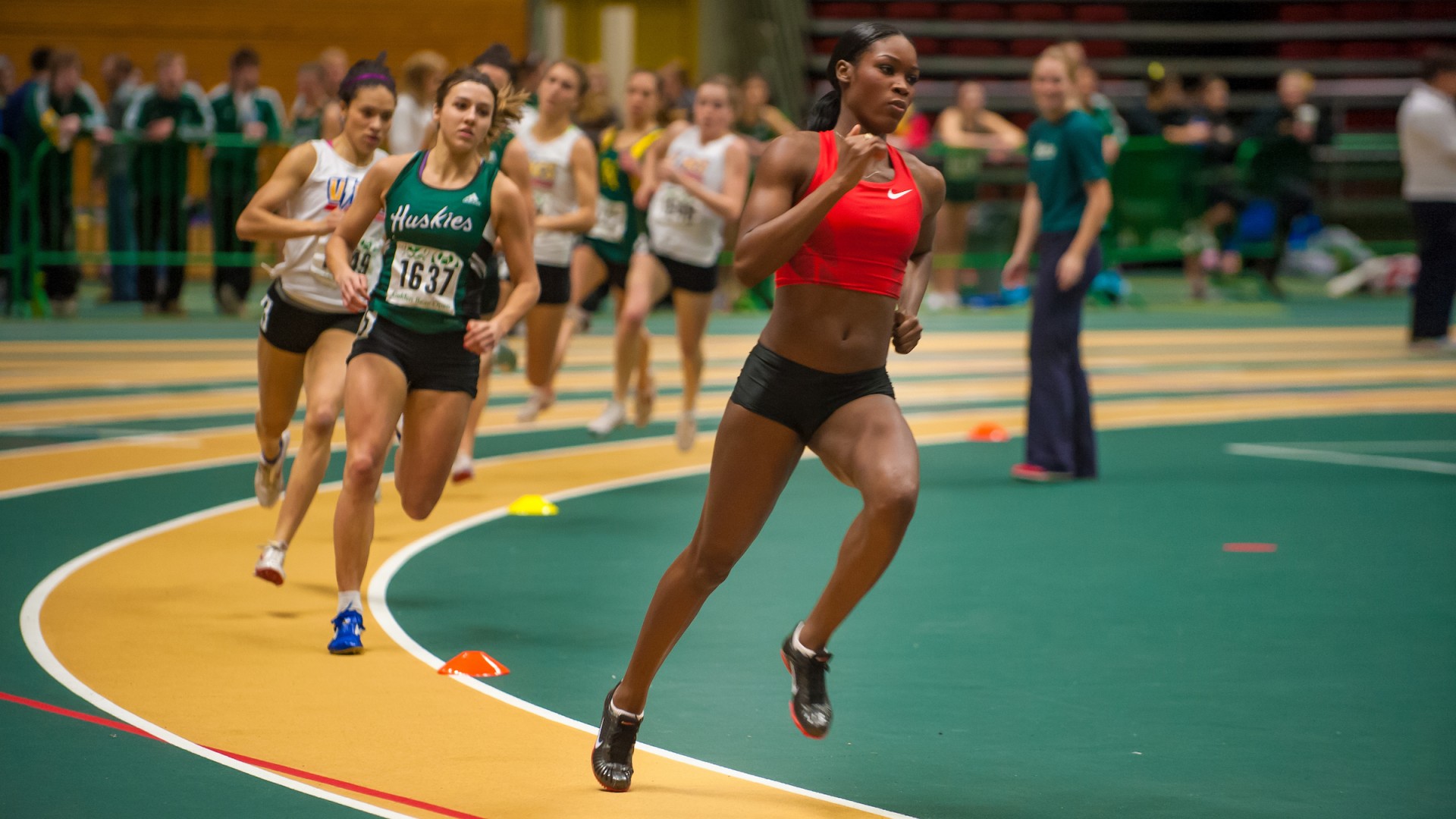 Carline Muir, who graduates with a Bachelor of Arts in Recreation, Sport and Tourism June 14, is seen here running to victory at the 40th Annual Golden Bear Open Track and Field Meet held at the U of A Butterdome in 2012. (Photo by Richard Siemens)

Carline Muir’s time at the U of A began in the spring of 2006 the same way it ended a little more than a decade later—as a member of the Panda’s track and field team.

Of course, the scale and pressure of university track doesn’t compare to taking to the starting blocks at an Olympic Games—something Carline Muir has done a dozen or so times over two visits to the big show. However, when she moved into position to run the final leg of the women's 4x200 m relay at the U Sport track and field championships held in Edmonton this past March, well, a race is a still race.

That was especially apparent when Muir was handed the baton in third spot, five metres back of first, which, in elite sprinting, is virtually out of sight.

However, mere steps into her leg of the race, Muir caught up to the second-place runner from Guelph who bumped her, resulting in a jolt that defied the law that dictates how objects travelling on the same plane in the same direction are supposed to collide. The startled hometown crowd let go a contracted roar as the Guelph runner careened out of contention and Muir kept her focus.

The inadvertent hit and run sounded the death knell for a U of A win, as the free-and-clear Laval anchor began a determined push for home.

Such has been the long odds that have largely opposed Muir as of late. But it wasn’t always like that.

When Muir first landed on campus in 2006, running was easy.

Back then, the Jamaican-born Muir was already known in track and field circles as a podium threat. Even before the U of A, accounts of a scrawny, shoeless wisp, lapping the field in her hometown of Toronto were already being heard south of the border.

And while a full-ride scholarship to a U.S. track powerhouse was enticing, rules around income as a student-athlete were prohibitive for someone compelled to support her mother and other family members who still lived back in Jamaica. “I needed to work.”

Staying in her adoptive home of Canada was a priority as well and since the U of A offered the most flexibility for Muir to race, go to school and work, she came west.

The early years couldn't have gone any smoother. By the time she was in third year, Muir was most of the way through a Bachelor of Arts in Recreation, Sport and Tourism. She was a multiple Canadian university track champion, she held the school record holder in the 300 m indoor sprint, and she represented Canada in the women’s 400 m sprint at the 2008 summer Olympics in Beijing, China.

“Those first Olympics came ahead of schedule,” said Muir, who missed the podium but managed a personal best time of 51.55 seconds.

Everything was running according to plan until an unrelenting spat of injuries—chronic hamstring problems, fractures alternating between feet, a crack in one of her knees—took hold and, in the process, introduced Muir to some of life’s harsher lessons.

“When you’re hurt, some people turn their back on you and aren’t willing to invest time in you anymore,” said Muir. “Then the years tick by.”

All told, Muir lost five-and-half years and a shot at the 2012 Olympics to injury.

“Coming off of injury I started to think ‘there is no way I can compete with the best in the world anymore.’”

A rule of thumb among track athletes is if you haven't had a personal best in three years, you're not going to have another. By the time 2016 rolled around, Muir was closing in on a decade between moments when she topped herself.

Then in 2015, after trying in vain to resurrect what was left of her athletic career abroad, she was summoned back to Toronto by a national team coaching staff and friends that never lost faith.

“At that point, I would have quit were it not for the great support system around me,” she said.

Injury free and running as well as ever, Muir won the women’s 400 m sprint at the 2016 Canadian Championships in Edmonton with a personal best time of 51.05 and in doing so, punched her ticket to the Rio Olympics. Unfortunately, a broken arm in France three weeks out from the Olympics hampered her training. But she still managed a respectable 12th in the 400 m.

“I ran a 51.1 in Rio, which wasn’t bad but without the broken arm, I could have done better,” she said. “More than that, though, I needed to prove to doubters that I could still do it. I think I did.”

Righting past wrongs didn't end with a triumphant return to the Olympics, as Muir also enrolled at the U of A to finish her undergraduate education.

“I always wanted to finish my degree, because there is life after track and you need to have something to fall back on,” said Muir, who at 29 chose to return to the U of A rather than finish her degree just about anywhere in the world. “The U of A is a great school and highly academic. I started here and have a lot of memories here. I just wanted to come back and finish here.”

Being the first member on her mother’s side of the family to earn a university degree also weighed heavily on the decision to return to the U of A, rather than pursue a host of opportunities that she has made for herself.

“Of course my parents are happy for me and my success so far, but I think graduating is something that makes them really proud.”

Upon her return in January, Muir was approached about joining the Pandas and reliving old glories. With a trip to the 2017 world championships in London scheduled and a desire to compete at the 2020 Olympics, Muir agreed.

“It was nice coming back, everyone was very encouraging,” she said. “The girls would tell me how inspiring it was to see me come back and finish. They also told me how intimidated they were at first, but would say ‘I don’t get it, off the track you’re so different, you’re just so sweet.’”

When it came time to race, Muir’s first order of business was to break the school record she set in the 300 m 10 years ago, which she did, cruising to U Sport gold in Edmonton in a blistering 37.47.

As it seems with a lot of athletes who train in an individual sport, what Muir said she really cherishes is the team-centred relay. A deep appreciation for sacrifices made by those closest to her so that she could follow her dreams might have something to do with this affinity.

Despite barely averting sure disaster shortly after the handoff in the first fateful moments of the final leg of the 4x200 m relay and trailing the Laval sprinter by a van length with 100 metres to go, Muir, like she always does, endured. And persisted.

In the time it took the race announcer to realize something remarkable was about to take place and utter the words “Carline Muir finds another gear,” Muir flashed her brilliance, erasing the unerasable in just 50 metres and turning a nailbiter into a route.

To win at the Olympics at the age of 32, Muir said it will take yet another personal best. Does she believe there is one more in the cards three-and-a-half years from now?

“Without question. I’m just getting started.”