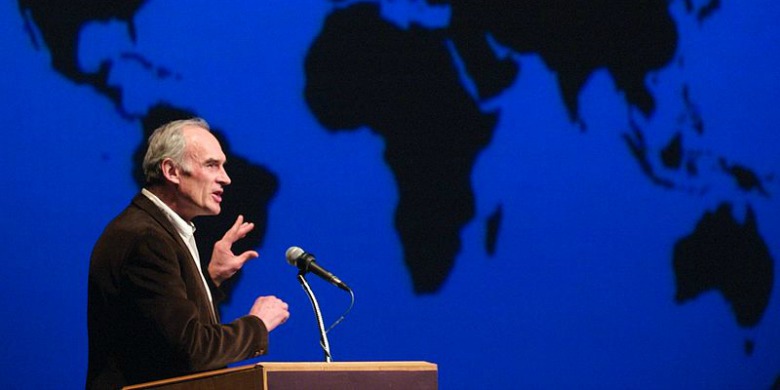 121122-ronaldwright-banner
Ronald Wright, author of "A Short History of Progress," is the keynote speaker at the Parkland Institute's three-day conference on "Petro, Power and Politics" Nov. 23 to 25.

(Edmonton) Oil is always a hot topic in Alberta, but it seems there’s been a lot of action in the world of petro lately—from debates about so-called “Dutch Disease” to the proposed Northern Gateway Pipeline to the Chinese play for the oilsands market.

Now, a University of Alberta institute is bringing the university’s expertise on energy issues together with other provincial and national perspectives to gain a wider view of the social, cultural and political aspects of an often contentious debate.

“Even more so than in the last few years, there’s been this discussion around oil developments and their impacts—on economic mergers, community development and so on,” says Ricardo Acuna, executive director of the U of A’s Parkland Institute. “We wanted to just step back a little bit and look at it all together instead of just little snippets you get here and there.”

To provide that bird’s-eye view, the institute is hosting three days of discussion and debate on oil and its impact on society and the economy at its annual conference Nov. 23 to 25, called Petro, Power and Politics.

Celebrated writer Ronald Wright, author of A Short History of Progress, kicks off the event Friday evening exploring how “the ‘experiment’ of civilization, fueled by fossil carbon, has reached such a pace and scale that it threatens to destroy the natural world on which it depends.”

On Saturday, former Parkland Institute director Gordon Laxer and Dylan Jones, president of the Canada West Foundation, will take up the controversial notion of “Dutch Disease.” What does it mean, and does it even exist in Canada? The term was heavily debated earlier this year when national NDP leader Thomas Mulcair came under fire for using it to describe a skewed Canadian economy, in which artificially inflated oil exports from Alberta have inflated the value of the dollar.

Other U of A contributors on the roster include sociology professor Sara Dorow, who is working on an ethnography of Fort McMurray, examining the impact of the oilsands on local quality of life. Her talk is entitled “We Don’t All Benefit: Social Inequalities and the Political Economy.” Former Parkland research director Diana Gibson will take a look “Beyond the Petro State,” and the institute’s current director, Trevor Harrison, will examine “Economic Development and Disparity in the North.”

National award-winning journalist Andrew Nikiforuk will present on the petro-state, “in terms of democracy and government and how money flows in the province,” says Acuna. Chief Allen Adam from the Athabasca Chipewyan First Nation will discuss oil industry regulation in Northern communities, and whether it is experienced as a positive influence.

Saturday night sees the launch of Calgary writer Jeff Galilus’s Little Black Lies: Corporate and Political Spin in the War for Oil, and Sunday the conference wraps up with two sessions that look to the future, including “Cleaning Up the Petro Mess,” by Duff Conacher, who will talk about “how to clean up this bad governance mess that threatens our health and welfare, and how to prevent it from being polluted again in the future.”

There are 122 sessions over the course of the weekend. Keynote and single-session tickets, and full conference registrations, can be purchased by downloading the registration form and faxing it to 780-492-8738 or mailing it to Parkland Institute, 11045 Saskatchewan Drive, Edmonton, AB  T6G 2B4.