Six tips to protect your eyes and view the event safely 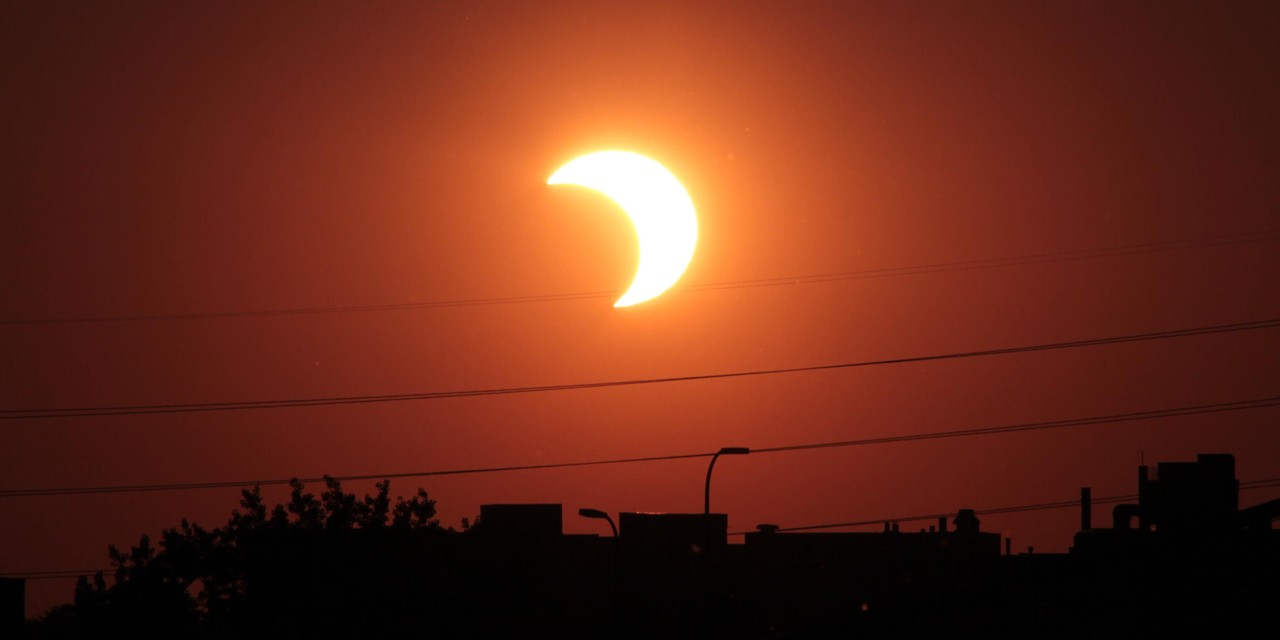 Edmontonians will have a ringside seat today for a partial solar eclipse, which will last from 10:24 a.m. until 12:50 p.m. (Wikimedia Commons)

The skies over Edmonton—and all of North America—will dazzle with a partial eclipse of the sun today.

“If there’s no cloud to block it out, we’ll see the moon cover close to 70 per cent of the sun,” said Sharon Morsink, an astrophysics professor who leads outreach programs at the University of Alberta Astronomical Observatory. “It will look like the Cookie Monster taking bites out of the sun.”

And take heart: even if the day is partly cloudy, the viewing should still be good.

“If you can see your shadow, it’s clear enough to see the eclipse,” said Morsink.

The partial eclipse—which last appeared in the Edmonton area in 2014—will be at its height at about 11:30 a.m.

The event, which will see the sun reduced to a crescent, is really an “amazing coincidence” anytime it happens, given that sun is both 400 times further away from Earth and 400 times larger in diameter than the moon, she noted.

Lucky sky-gazers vacationing or living in a narrow strip of the United States stretching from Oregon to South Carolina, are far enough south to be treated to a full eclipse.

Through a filtered telescope—like those at the Royal Astronomical Society of Canada observatory at Telus World of Science—people can look for phenomena they wouldn’t be able to see with the naked eye, like sunspots. “It’s fun to see the shadow of the moon go over them.” Loops of gas ringing the sun may also be visible as they become blotted out by the moon.

The next eclipse to grace North America’s skies won’t come around until 2024 and will be over Eastern Canada, so Morsink, who traveled to the U.S. to view the eclipse at its fullest, urges people to take a few minutes out of their day to enjoy the light show.

“Events like this are a reminder of how amazing our universe is,” she said.

1. Use special solar glasses. These light cardboard spectacles can be purchased online.

2. Don’t look at an eclipse with the naked eye. Even a partial eclipse will burn your retinas.

4. Make your own viewer by purchasing welder’s glass No. 14 from a welding supply store, cutting out a square opening in a piece of cardboard and duct-taping the glass to the cutout.

5. For a different and distinctly artsier perspective, create a simple pinhole viewer by poking a tiny hole in a piece of cardboard with a safety pin. The shadow cast on the ground will show the crescent of the partial eclipse.

6. Pop into the Telus World of Science for a viewing session at the Royal Astronomical Society of Canada observatory, where specialized telescopes—equipped with proper solar filters—give a first-class peek at the goings-on in the heavens.