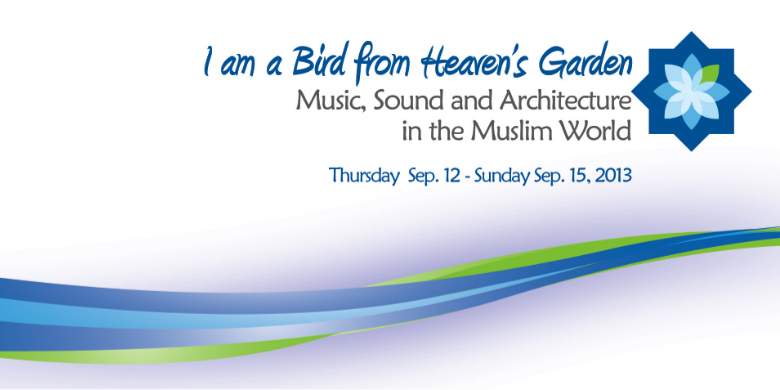 (Edmonton) Music is a powerful tool, one that transcends language and culture. How and where music is enjoyed not only affects the way music moves and is heard, but also has a profound effect on the human experience—body, mind and spirit.

This intersection of sound, space and spirituality has been at the heart of musical and artistic expression, including in Islamic cultures across the globe. It is also the focal point of I am a Bird from Heaven’s Garden: Music, Sound and Architecture in the Muslim World.

The three-day conference celebrates the partnership between the University of Alberta and Aga Khan University and connects the world’s leading musicians, garden designers, architects, scholars and music lovers—culminating with an unrivalled auditory experience at the Devonian Botanic Garden.

“Music has the power to retain, to remind you of something in the past. It’s heritage, it’s very real, it’s very audible,” said Regula Qureshi, director of the Canadian Centre for Ethnomusicology at the U of A and conference co-chair with music professor Michael Frishkopf. “Even as people migrate from one city to another or one part of the world to another, you always have music.”

I am a Bird from Heaven’s Garden is the latest embodiment of an ongoing partnership between Aga Khan University and the U of A to increase global engagement and promote equitable human advancement and social justice throughout the world.

The idea for an international conference began with a Social Sciences and Humanities Research Council-funded research project led by Frishkopf that explores these same issues. The conference name is taken from the words of the 14th-century Persian poet Hafiz, who described the garden as heavenly and earthly, home to beautiful music—we are all the bird that longs to return.

The slate of performers includes New Sounds from Arab Lands. Making their Canadian debut during workshops and a Sept. 14 performance at Myer Horowitz Theatre, the trio blends musical influences that range from traditional Arabic to classical to jazz.

New Sounds is a collaboration curated and produced by the Aga Khan Music Initiative (AKMI), a program of the Geneva-based Aga Khan Trust for Culture. The initiative is an inter-regional music and arts education program with worldwide performance, outreach, mentoring and artistic production activities designed to promote the revitalization of cultural heritage, both as a source of livelihood for musicians and as a means to strengthen pluralism in nations where it is challenged by social, political and economic constraints.

“It has been a privilege to collaborate with the symposium’s energetic and resourceful organizers in bringing together talented musicians, scholars and artists to explore the intricate relationship of landscape, soundscape, architecture and spirituality in the Muslim world,” said Fairouz R. Nishanova, director of AKMI and one of the symposium speakers. “Understanding this relationship is of critical importance for the music initiative.”

Music in the Garden

A conference highlight is a Sept. 13 musical performance at the U of A’s Devonian Botanic Garden. Concertgoers will be able to stroll through the Kurimoto Japanese Garden, where several musicians will perform solos at various locations, providing an unrivalled visual and auditory experience.

“It’s a new way of discovering music when you hear it,” Qureshi said.

Musicians will also participate in workshops aimed at composers, students and community performers, across a variety of musical styles and instruments.

The symposium features 20 speakers across a range of disciplines, from Deborah Kapchan, an NYU professor of performance studies who will give a talk about how Sufi Muslims from Morocco are creating a sense of belonging in France; to Ali Asani, a professor of Indo-Muslim and Islamic religion and cultures at Harvard; to art historian Nina Ergin of Koç University in Istanbul, who specializes in Ottoman architecture.

For Rana El Kadi, a PhD candidate studying ethnomusicology at the U of A, the conference provides a rare opportunity to learn from leading international scholars. It’s also been a rewarding experience to work with members of Edmonton’s Ismaili community who have been instrumental with planning, volunteering countless hours to help with an event that can lead to greater intercultural understanding.

“This is an amazing, multi-faceted event,” said El Kadi. “The conference will be a great way to create a dialogue between so many different groups, not just academics—it’s a win for the U of A, for Edmonton, for Canada.”