Partnership to help build a new era of electronics 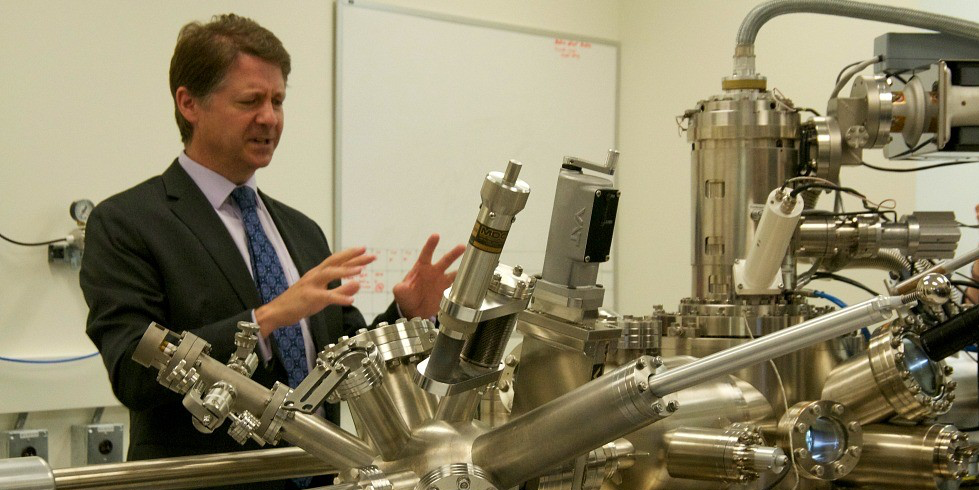 UAlberta physicist Robert Wolkow's nanotechnology research program got a boost thanks to a $2.7M collaboration with Lockheed Martin and the Alberta government to commercialize the world's first atomic-scale computing technology.

(Edmonton) Support for groundbreaking nanotechnology research led by University of Alberta physics professor Robert Wolkow is the first to be unveiled under an agreement signed earlier this year with the Government of Alberta.

Wolkow’s advances in nanomaterials—now part of the U of A spinoff company Quantum Silicon Inc.—is one of three projects to benefit from ties with technology giant Lockheed Martin, made possible through a memorandum of understanding signed with the Alberta government in May 2014.

This support for the advanced nanotechnologies that have come from Wolkow’s research in the Faculty of Science is the first to be announced Oct. 28 under the MOU. The research program, considered a front-runner in nano-electronics, is pioneering new pathways for atomic-scale technologies that go far beyond the roadmap for ultra-low-power computing devices.

“Alberta’s innovation system is helping Alberta companies grow and diversify our economy on the leading edges of technology. Our innovators and collaborative system attract companies like Lockheed Martin to work with us and move groundbreaking ideas into markets here and worldwide,” said Don Scott, minister of innovation and advanced education.

Lorne Babiuk, vice-president (research) at the U of A, notes, “This announcement is an excellent example of what strong partnerships can accomplish. Industry, government and academia are collaborating to advance our province’s innovation agenda. The work of Professor Wolkow and his team illustrates how basic research and discovery can lead to innovations that benefit society.”

Bringing together an international company and a research leader like the U of A creates possibilities for developing new technology and giving students dual literacy in science and in industry, Wolkow says.

“I’ve been working in this field for almost 30 years, and today marks the accomplishment of several of my biggest goals as a professor and scientist, including driving new technologies into application and bringing my students into industrial collaborations like this,” notes Wolkow, who is also the chief technology officer of QSi.

Where innovation meets the market

In terms of meeting the market, Ken Gordon, CEO of QSi, points out that “taking new solutions to market is deeply complex and requires highly visionary industry leaders to step up, which is what Lockheed Martin has done. Lockheed will provide invaluable insights into the market that will be critical to our success.”

Gordon explains, “In order to navigate the complex move from the lab to the market, we convened industry leaders from across North America where the science was exposed to an intense industry review. At the end of that session, the group concluded that the advances Wolkow has made stand to transform the semiconductor industry.”

The $2.7-million collaborative project was created to commercialize the world’s first atomic-scale computing technology. Alberta Innovation and Advanced Education and Lockheed Martin Canada have contributed to the project and secured matching funding from Western Economic Diversification Canada, Quantum Silicon Inc., the National Research Council, the National Institute for Nanotechnology and the U of A. Wolkow also holds a Tier 1 Nanoscale ICT Chair from Alberta Innovates – Technology Futures.

Partnership to help build a new era of electronics
Newsroom