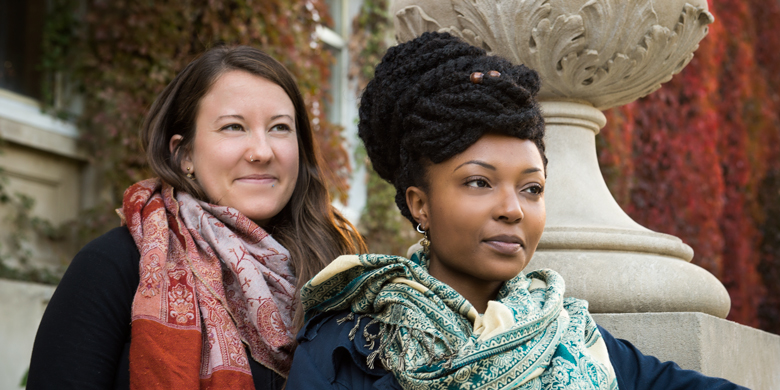 131015-cup-banner
CUP youth council members Freddi MacDougall (left) and Lynda Bulimo are helping to develop a framework for community agencies to reach out to youth in need. (Photo: Richard Siemens)

(Edmonton) Lynda Bulimo was only 14 when her family pulled up roots to move from the United Kingdom to Canada. At the time, she felt overwhelmed, unsure of herself and afraid she wouldn’t fit into a whole new world.

At an age when peer acceptance matters most, “I felt worried about what to expect,” Bulimo recalls.

Now a third-year student in the University of Alberta’s Faculty of Education, Bulimo has come a long way and is drawing on her life experiences to give back to a new generation of youths, through the Community-University Partnership (CUP).

CUP, based in the U of A Faculty of Extension, partners the university’s researchers and their knowledge with community agencies and organizations in Edmonton and across Alberta, to focus on issues affecting children, youth, families and communities.

CUP is also one of 50 recipients that will benefit from the U of A’s 2013 United Way campaign, which is in full swing with a goal of raising $650,000 in October—and if that amount is reached, marking a milestone of $10 million raised for the United Way over 30 years by the U of A.

In keeping with this year’s fundraising campaign theme of “Creating Pathways Out of Poverty,” CUP plays a vital role in doing just that, said director Yoshitaka Iwasaki.

“CUP connects the University of Alberta and the community as partners to address issues such as poverty, homelessness, early childhood development, youth engagement and capacity-building. We mobilize community-based research into action and change,” Iwasaki said.

Having the support of United Way funding, generated by campaigns such as the U of A’s, is crucial to helping fulfil the university’s commitment to the community, Iwasaki added.

“Through CUP, we have a responsibility to the community, and United Way funding makes it possible.”

Guided by a steering committee of government members, U of A scholars, the non-profit sector, health services, community foundations and clubs, CUP oversees several initiatives aimed at improving child and family development, including a youth engagement project that Bulimo and other young people, including recent U of A Faculty of Arts graduate Freddi MacDougall, are involved in.

Begun by CUP two years ago, the research project stemmed from a need voiced by community agencies to connect more strongly with young people who struggle with poverty, mental illness, homelessness or social exclusion.

As youth council members for CUP, Bulimo and MacDougall, along with several contemporaries from programs across Edmonton—including formerly at-risk youths—are developing a framework that can be used as a tool for agencies to reach out to young people in need and to create effective policy and practice.

The framework should be launched next year, said Bulimo, who believes she and her colleagues have gained as much from it as any of the youths the project hopes to reach.

“This CUP project will boost self-confidence and empower youths, knowing that no matter what circumstances they come from, it is possible to get to where you want to be. We all recognized that we have overcome challenges, and being involved with CUP, we are helping ourselves at the same time. I still need to boost my confidence and I still need to seek help sometimes.”

“The framework is built and inspired by people who have lived these realities,” added MacDougall, who got involved with the project through an interest in social justice, and believes their CUP work makes a difference. “We’ve provided for a very inclusive, bottom-up approach; instead of telling youth what kind of program to go through, this project aims to provide them with the agency to make decisions about their own lives.”

There is still plenty of time to give to the U of A United Way campaign, said co-ordinator Darlene Bryant.

“We remind the U of A community to send in the pledge cards they received earlier this month using the self-addressed envelopes, or to download a pledge form from the United Way website.”

As well, check out the website for more fundraising fun, including an upcoming auction for a guitar signed by top Canadian musicians including The Barenaked Ladies, k.d. lang and Sarah McLachlan, Chillin’ for Charity Oct. 29, and a community garage sale by the Faculty of Extension Oct. 31.