The conclusion is, it’s environmentally friendly to wash your clothing less often, and not necessarily any dirtier.

Textile scientist Rachel McQueen is on a mission to get us to wear sustainable fabrics and save the environment. 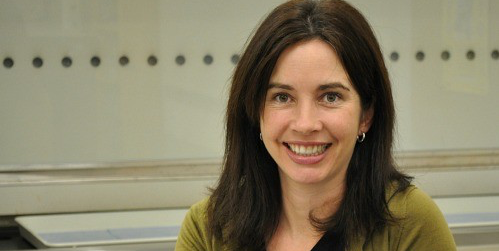 Rachel McQueen studies how fabrics release odour, or not. Her findings have attracted the attention of the textile industry and the international media.

Rachel McQueen isn’t easily hoodwinked by huge clothing sales, or trendy brands, or the perfect fit. She shops, and she’s stylish, but what usually snags McQueen’s attention is the tiny print tags saying what the fabric is made from. Polyester. Silk. Acrylic. Nylon. Wool. Viscose. Cotton. Ever the textile scientist, even when browsing the racks, McQueen is doing research.

“I’m always looking at the labels,” she says. “My husband gets sick of it. ‘Come on, Rachel, it looks good!’”

But McQueen doesn’t get sick of it. And it’s that passion that drives her research into why fabrics behave the way they do in relation to our bodies and behaviour. From a modest laboratory in the antiseptic basement of the Department of Human Ecology, the vivacious New Zealander and her assistants are tirelessly working to better understand the complex relationship between fabrics, odour and laundering through sensory studies and, thanks to a close collaboration with U of A chemist James Harynuk, chemical analysis.

“Her lab could do the wear trials and the odour evaluation, as well as the chemical analysis,” says Mary Ankeny, Cotton Inc.’s senior director of textile chemistry research, with regard to odour research they contracted McQueen to do on cotton versus other fibres. “She really was able to look at the whole picture and provide the textile industry with some valuable information on how cotton is able to release odour as compared to synthetic fibres.”

Response to a Cotton Inc. webinar featuring McQueen and her research findings was “tremendous,” Ankeny recalls. “We had over 200 attendees. This is information that people really need. It was one of our most highly attended webinars.”

And McQueen’s research is right on the pulse of the move toward more sustainable clothing. In 2014, Levi Strauss & Co. CEO Chip Bergh made headlines when he acknowledged he had yet to wash his favourite pair of raw denim jeans, which he’d been wearing for more than a year.

The international reaction to Bergh’s ostensibly shocking denim revelation was part disgust, part fascination. It also created buzz around McQueen’s research findings. More than two years earlier, McQueen met Josh Le, an Edmonton student who’d been wearing the same pair of raw denim jeans for 15 months without washing them. McQueen swabbed the dirty jeans, and had Le wash them and wear them for two more weeks. There was no discernible difference in bacteria levels. “The conclusion is, it’s environmentally friendly to wash your clothing less often, and not necessarily any dirtier,” she says. The research findings garnered international media attention: McQueen and Le did a flurry of media interviews around the world.

Laundering costs money, wastes water and electricity. And the clothing isn’t any cleaner as the jeans study showed; it just wears out more quickly and has to be replaced. “I don’t think people fully realize how degrading laundering is to textiles,” she says. People over-launder largely out of habit, she explains, and it’s essential to point out the financial benefits of breaking the habit, which can be a bigger motivator than care for the environment alone.

McQueen’s desire to arm consumers with knowledge that’s good for the environment and their wallets falls right in line with a growing movement toward sustainability in the clothing industry. “We’re seeing that across the retail chain,” Ankeny says, “where different brands are trying to be good environmental stewards because their customers are interested in the concept of sustainability.”

Take the Levi’s CEO. In announcing his never-washed jeans, he wasn’t just trying to make people cringe. He was using his star power to push the company’s sustainability initiative, which encourages the reduced use of energy and water.

“There are things we can do from a manufacturing side of course, but that doesn’t always translate or give the consumer any partnership in how they’re affecting the environment,” Ankeny says. “But if you can let them know, ‘hey, your garments are not going to retain odours, you don’t have to wash them every time,’ that gives the consumer the control on how they approach the environment.”

While McQueen’s textile research is having a global impact, her drive stems from a personal place. McQueen has always been partial to natural fibres like merino, perhaps because of where she grew up; New Zealand is the world’s third largest producer of wool, after China and Australia. “Especially for T-shirts and things you wear next to your skin,” she says. “You do feel less sweaty in wool. Merino will absorb it so you feel less damp.” It’s something she’s worked out herself over the years. “Some fabrics smell, some don’t. I think, if I’m experiencing this, then certainly others are, too.”

Her own experiences with body odour in different fabrics sparked her doctoral research at New Zealand’s University of Otago. From 2003 to 2007, McQueen compared the relationship between body odour and three fabrics: polyester, cotton and merino wool. Sweat itself is odourless, she explains; body odour happens when bacteria on our skin feeds off the sweat and breaks it down into smaller, stinky compounds. And different fabrics have different interactions with the odour and the bacteria.

McQueen had male volunteers wear test T-shirts for two days, then conducted odour evaluations on fabric  swatches cut out of the T-shirts’ underarms. Smell tests were conducted after one day, seven days and 28 days. Results? Polyester was the smelliest and merino wool was the least smelly. Using microbiology, McQueen also examined bacteria levels in the fabrics over the 28-day study period. Interestingly, bacteria survived the longest in the merino wool, while it dropped significantly over time in the polyester fabric. “This blew up the myth that wool is antibacterial,” she says.

Why is merino wool less stinky? The research is ongoing, and complex. Wool is more absorbent, McQueen explains; it’s a protein fibre that is more porous than other fibres; also, at its molecular level, it can bind better with odorants. It could also be that wool desorbs more quickly, releasing the odour even if the bacteria remain.

“Anything we can use as evidence that there is an anti-odour factor from merino wool does help us with marketing,” says Carter. “We believe that, in comparison with polyester, there is a better resilience to body odour in merino wool. We understand that, and it’s an important factor when we sell merino fabrics.”

Odour is a big deal in the clothing manufacturing industry. A focal point for McQueen’s research has been investigating the supposed “anti-odour” capabilities of synthetic garments. Clothing manufacturers make all manner of marketing claims about the anti-smell power of their goods. But the claims can be very misleading, says McQueen. “People think ‘Wow, they know their stuff!’ And it’s complete rubbish.”

Synthetic fabrics can be treated or “finished” with antimicrobials such as silver chloride, with the goal of keeping armpit bacteria at bay, she explains. But her studies have shown that, although these antimicrobial mixtures control the bacteria, they do not control the smell. “In the study I did, there wasn’t any difference in odour control with or without antimicrobials.” Yet even though antimicrobials are only part of the solution, time and time again McQueen sees companies advertising that their garments will keep body odour at bay. “It matters to me as a scientist because so many misleading claims are being made, and people believe them. And that frustrates me.”

While McQueen leans toward natural fibres, it doesn’t make her biased against synthetics. It makes her want to work harder to find solutions. Polyester is a strong, resilient fibre, she explains, revolutionizing the clothing market in the 1950s, and today it’s a huge player on the market, especially in sportswear. “Polyester’s not going away,” she says. “And for its fibre it’s great in many ways. It can be altered and shaped in different ways to enhance wicking.” She’s keen to figure out what makes polyester make clothing more odorous largely to work towards sustainable solutions. “If you could wash it less often, that would be fantastic.”

Naturally, McQueen’s research affects her consumer choices, which is why she’s forever reading clothing labels. Fabric content is of particular importance when shopping for her two small children. “I don’t like polyester right next to their skin,” she notes, especially at night. When people give her hand-me-down synthetic sleepwear, McQueen still puts a cotton T-shirt underneath her son’s pyjama top. It’s an added layer but he doesn’t sleep with the covers on all night, and “without that, he’ll sweat more” in polyester alone.

McQueen’s passion, at its core, is about tackling everyday problems, helping regular people make consumer choices that save them money and help the environment.

By meticulously unravelling, fibre by fibre, weave by weave, the complex relationship between fabrics and people (both their armpits, and their actions), this textile aficionado’s mission is to make us all smarter shoppers (and clothing label readers). Why? If we can choose fabrics sustainably, it’s good for our wallets, and the planet. “My research is about making consumers aware of the environmental impacts of laundering your clothes all the time.”