Past becomes present for history graduate who studied Spanish flu

Why the COVID-19 pandemic feels surreal but familiar to Suzanna Wagner, who wrote her master’s thesis on Canadian nurses in the First World War. 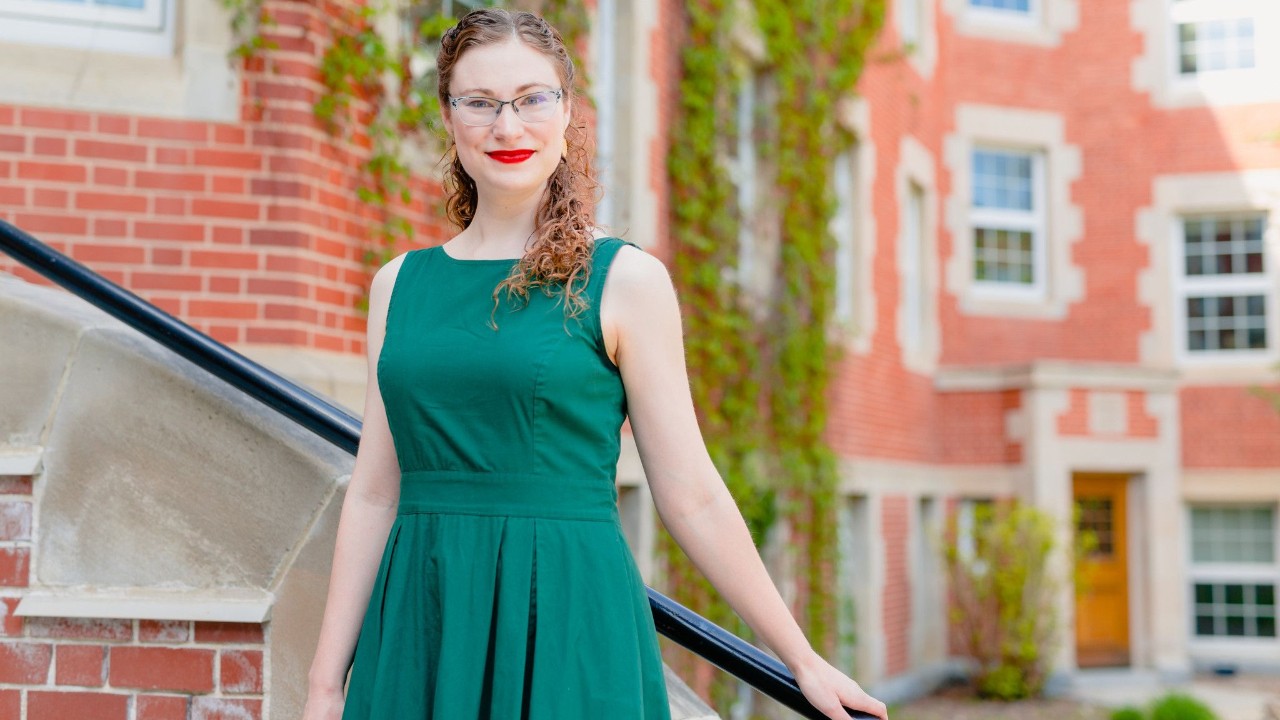 Suzanna Wagner stands outside the U of A's Pembina Hall, which was turned into a makeshift hospital during the Spanish flu pandemic of 1918. Wagner, whose master's thesis focused on the role of Canadian nurses in the First World War, says watching the COVID-19 pandemic unfold feels oddly familiar: "I've seen these headlines before. I've read all this stuff before." (Photo: Jordon Hon)

Defending her master’s thesis just two days before COVID-19 forced the University of Alberta to close was strange enough. Receiving a call from the Edmonton Journal for her take on the pandemic was downright surreal.

“It’s really odd as a historian to suddenly have people in the current media asking, ‘Tell us what happened in the past,’” said Suzanna Wagner, graduating this week with a master of arts degree in Canadian history.

“Watching (Alberta chief medical officer) Deena Hinshaw’s announcements, I remember having this bizarre flashback to, ‘Oh, yeah, I've seen these headlines before. I've read all this stuff before.’”

Wagner’s thesis topic was the role of Canadian nurses in the First World War, but two years ago she was asked by U of A historian Sarah Carter to write a paper on Edmonton’s response to the Spanish flu for an event commemorating its 100th anniversary.

The historical parallels are striking. Then as now, nurses were fighting on the front lines of the pandemic, terrified of contracting a deadly virus for which there was no cure.

“Doctors could do the rounds and check on patients, but there wasn’t a medical therapy to cure the flu. So there was a huge need for good nursing care, and there weren't enough nurses to go around.

“That's when you had these semi-trained or untrained volunteers—mostly young women. Schoolteachers and other single women were under enormous pressure to volunteer,” she explained.

Classes at the U of A were cancelled, and Pembina Hall was transformed into an emergency hospital for a month, Wagner noted in a 2018 column she penned for The Quad, the U of A’s internal newsletter.

Wagner’s interest in the history of nursing came about quite by accident after volunteering for years at Fort Edmonton Park. She was offered a job as a costumed historical interpreter, a role-playing position requiring her to answer questions from park visitors.

“The park asked if I would be the First World War nursing sister, and I had no idea what that was. But I said yes, and got so interested I just couldn't stop reading about it.

“I couldn't find enough information, and it was deeply frustrating to me. Everywhere I turned, I had more questions, so I decided I'd better just find the information myself.”

There was only one English-language scholarly monograph devoted exclusively to Canadian Great War military nursing, published in 2016. The rest of the bibliography was rounded out with one French-language book and a few articles.

“I decided that I needed to solve this problem—that's what got me into my master’s,” she said.

Wagner is no stranger to hunting down answers. Her interests run the gamut, and wherever her mind leads, she follows.

That insatiable curiosity may have started with the “fantastic” social studies teacher in her Stony Plain high school, or perhaps growing up around the dinner table when discussions “usually ended with someone going to get an encyclopedia.”

Or it may have been her training as a ballet instructor, which taught her to “break things down—a really useful skill as an academic,” or her experience as assistant manager for the Bella Baroque chamber ensemble.

She completed her BA at the U of A in German language and literature, with a minor in theology, which she took at St. Joseph’s College. After considering a master’s degree exploring the Hebrew Bible, she eventually settled on Canadian history.

Career aspirations were the last thing on her mind.

“I've never been able to pinpoint one job that I wanted,” she said. “At family reunions when people asked me what I wanted to do, my standard response became, ‘As long as I'm interested, I’m happy.’”

Her master’s investigation paid off when, after finding some published memoirs and a collection of letters by wartime nurses, she met the editor of one collection, a York University scholar, at a conference.

“I went up to her and said, ‘Oh, thank you so much for doing this, you've made my life so much easier. I don't have to sit for years in the archives reading handwritten letters.’”

The scholar told Wagner the letters were edited down for her collection, offering her the original copies.

That was her breakthrough moment, and according to her supervisor, Susan Smith, a reflection of what makes her an exceptional budding historian.

“Suzanna is without a doubt a very talented scholar who loves to share her knowledge about history with the general public,” said Smith.

“Her work draws on a rich collection of published and unpublished nurses' memoirs, letters, nursing journals and military sources to provide important insights into this significant episode in Canadian nursing history, and a little-known aspect of Canadian history.

“The richness of her study lies in the details she uncovered about such things as managing food, clothing and laundry in the midst of war. Her study presents a vivid picture of the living and working conditions of Canadian nurses serving in Greece and Egypt.”

Smith said Wagner was also an historical interpreter for the 100th anniversary of the Battle of Vimy Ridge in France in 2017, where she presented on the contribution of Canadian Army Medical Corps Nursing Sisters to thousands of Canadian students.

For now, Wagner says she’s interested, and so she’s happy.

“I find this a very rewarding kind of job,” she said. “So I am hoping to stay there, and keep playing with the academic stuff because I don't want to lose my involvement in that world. It's too exciting.”

Past becomes present for history graduate who studied Spanish flu