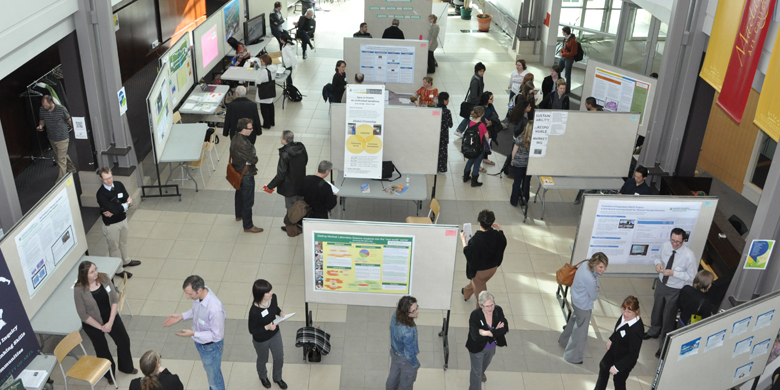 (Edmonton) The Festival of Teaching, which was designed to showcase exemplary teaching, kicked off at the University of Alberta March 12 with faculty members and graduate students showcasing ways teachers can inspire students—and students can inspire teachers.

A common thread—the change in the traditional relationship between faculty and their students—ran through three TED Talk-inspired FoT Spots, each of which featured a faculty member and graduate student showcasing innovative teaching methods on-stage.

Drama professor Michael Kennard, one of the presenters, says the way a researcher thinks about students is essential to building a relationship that promotes effective learning.

“I’m a firm believer that I’m on equal ground with every student, and I’m not above any student,” said Kennard. “Part of my wish in any class that I go into is that I get challenged, too—that I learn from students just as much as they’re learning from me. And as long as that’s happening, it’s working. If I put myself on this pedestal, above everybody, it just doesn’t work.”

“I’m a big believer in that part of my job is to inspire every student, regardless of their level.  And that means paying attention and caring about every student,” he said.

Billy Strean of the Physical Education and Recreation Faculty, presenting with his student Omar Amer, presented a three-part showcase, The Dance of Engagement, that included a physical representation describing a relationship between an engaged student and teacher, excerpts from their emails and a discussion on the impact they’ve had on each other.

“We explored how the relationship between teacher and student can be inspiring to both,” Strean says. “Through this sort of demonstration, people may see different, new possibilities for how they create their relationship with students—what might create more inspiration and engagement.

“When both students and professors are fully engaged, they’re putting their energy into that relationship, and that makes for a far more effective learning environment.”

In her introduction to philosophy class at Augustana Campus, Janet Wesselius says she personifies some of the philosophical questions that are as old as humanity. “If we’re learning about [philosopher Rene] Descartes, I will say to students, ‘imagine me as this little French guy,’” she says. “Let’s also assume we’re dealing with questions about the meaning of life. For example, how you can be sure that your mother loves you? Channelling myself through Descartes, I’d tell them what he’d say in response to that question.

“And then I would stop and ask them, ‘do you feel convinced that your mother loves you based on what Descartes says? If not, why not?’” she says. “And then students get to answer that question from their perspectives.”

Wesselius also brings students to centres for seniors where they tackle questions about life with the more experienced. She says students return to the classroom with responses to questions such as, ‘Was life worth living during the Depression.’ “Then I will get them to talk about the responses in relation to what [existentialist philosopher Jean-Paul] Sartre, for example, may have said about such questions,” said Wesselius.

These approaches, along with more than 30 others, that showcased at the fair, are also examples of how the U of A strives to inspire and celebrate those who are teaching now and who will be teaching in the future, says Chancellor Linda Hughes. “The university is committed to fostering and sharing the spirit of innovation across our campuses,” she says.

Chole Wall, U of A student who presented with Wesselius, says she looks for certain qualities in an inspiring teacher, including someone “who challenges,  who believes in me and who’s willing to ask questions they don’t have answers to but are willing to discuss.”  Added to that, is Elena Belyea’s need for trust. The former drama student of Kennard says trust has been essential in building a relationship with her professor.

“Even though our relationship as a university professor and student has ended, I still have somebody to go to as a resource,” Elena says. “Recently I tried to compile a grant application and it was really, really valuable to have Michael to go to. Our relationship is something I could draw from as I try to develop as a professional.”

Inspire the Student-Inspire the Teacher was the theme for FoT Spots, which Strean says provided both seasoned and newer faculty an opportunity to see how a change in the student-teacher relationship could result in effective learning.

“This event recharges people who are already passionate teachers because they see there are others like them with new ideas,” he said. “For the newer teachers, it gives them the impetus to try something new, all of which raises the profile and quality of teaching and learning.”