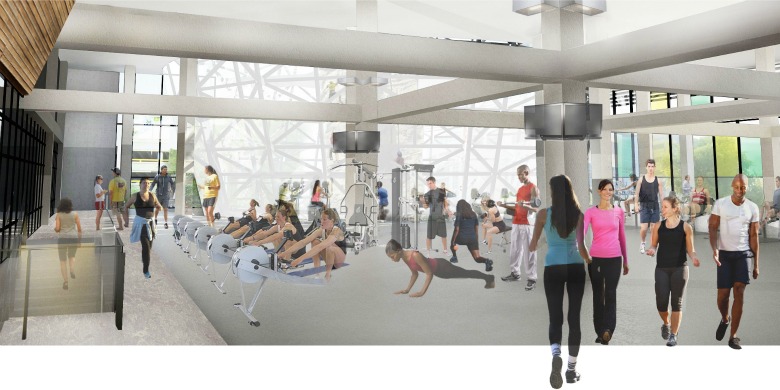 121105-pawcentre-banner
Artist's rendering of the new PAW Centre. The 111,000-square-foot facility represents a remarkable partnership between UAlberta and students to promote wellness on campus.

(Edmonton) The University of Alberta is breaking new ground for healthy, active living on campus with the construction of a new 111,000-sq.-ft. Physical Activity and Wellness (PAW) Centre.

When completed in fall 2014, the state-of-the-art PAW Centre will serve a prominent role in the health and well-being of U of A students, faculty, staff and campus neighbours, said Kerry Mummery, dean of the Faculty of Physical Education and Recreation.

“The PAW Centre is the culmination of years of hard work and a shared belief in the importance of maintaining a healthy, active lifestyle,” said Mummery. “Physical activity offers health benefits for people of all ages, from all backgrounds and abilities, and those benefits extend to the broader society. We are not just building a fitness centre; we are building a healthier community.”

Construction officially kicked off Nov. 5 when student leaders and university faculty and staff were joined by city and provincial representatives for a sod-turning at the site on the corner of 87 Avenue and 114 Street.

Hallmarks of a healthy partnership

Mummery said the project would not have been possible without the remarkable commitment from U of A students, who are key partners in the $57-million project. The PAW Centre was approved through a referendum in 2010 after students agreed to contribute $30 million through a non-instructional levy.

An anonymous donor also gave $10 million to the project, and $4.5 million in provincial lottery grants will be dedicated to the facility, with additional dollars coming from the university, fundraising and sponsorships.

Students’ Union president Colten Yamagishi said the PAW Centre is destined to become a multidisciplinary hub conducive to creating social, recreational and educational opportunities, with hallmark features like the climbing wall, fitness centre and ample space for studying, casual recreation and the general exploration of health.

“I am certain that the world-class facilities and services offered at the PAW Centre will provide an amazing incentive for students, staff and community members to get active and pursue a positive healthy lifestyle,” he said.

Graduate Students’ Association president Ashlyn Bernier praised the work of her predecessors who worked closely with the SU and university to make the PAW Centre a reality.

"The PAW Centre is going to be a hub on campus where graduate students can join undergraduates, staff, alumni and members of the community in the pursuit of a healthy and balanced lifestyle for many generations to come,” she said. “Educating students on health and fitness and giving them a beautiful facility in which to pursue a healthy lifestyle is an investment in their well-being, and will no doubt create a happier and more productive campus."

When complete, the PAW Centre will be unique in Canada, with a 25,866-sq.-ft. fitness centre, 7,503-sq.-ft. climbing centre and 66-ft. climbing wall, as well as a new and expanded Steadward Centre, student lounge and gymnasium, said John Barry, co-ordinator of capital projects with physical education and recreation.

“It’s an outstanding project. The fitness centre alone will put us in the upper echelon of Canadian universities and the climbing wall will certainly be one-of-a-kind in the world,” said Barry. “There are not many universities out there that have 26,000-sq.-ft. fitness centres like we will.”

Another feature will be the social street, a new concourse between the Universiade Pavilion (Butterdome) and the east wing of the Van Vliet Centre. Barry said it should be a hub of activity with a student lounge and meeting areas, restaurant and community kitchen, while providing a natural traffic flow leading to the Students’ Union Building and Edmonton Clinic Health Academy.

The facility will be built to Green Globes standards, targeting a four-globes rating that recognizes environmentally sustainable design and building methods. The PAW Centre will feature a number of renewable and alternative energy technologies, many for educational and demonstration purposes, including solar photovoltaic panels, micro-wind turbines and fuel cells to generate power and heat.

Len Sereda, director of energy management and sustainable operations, called the PAW Centre “an experiential laboratory” that will showcase technologies and their role in reducing the university’s carbon footprint.

“We want to use these technologies as teaching and learning opportunities to engage our students, faculty and staff, and to engage external communities as well,” Sereda said.

Barry said construction will have its share of challenges, especially since the Butterdome will continue to operate even after the entire east wall of the main gymnasium is removed. Some areas will have to be shut down to accommodate construction, but in some cases—like during final exams—crews will ensure they’re not intrusive, he said.

Once the PAW Centre opens, the current fitness centre in the west wing of the Van Vliet Centre will be converted to a two-level facility, housing the Steadward Centre for Personal and Physical Achievement on the main level, with space on the upper floor for a future dance studio.

Learn more about the PAW Centre