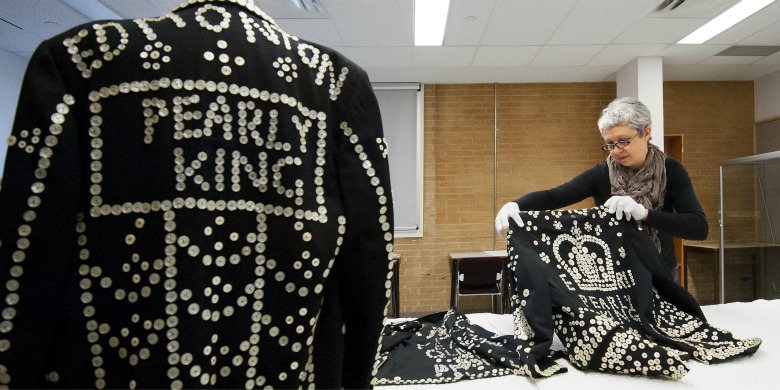 120607-pearlycostumes-banner
Vlada Blinova, manager of the U of A's clothing and textiles collection, shows off some of the Pearly costumes donated to the university. (Photo: John Ulan)

(Edmonton) A bedazzling piece of Edmonton history has been donated to the University of Alberta’s Clothing and Textiles Collection, where some treasured family artifacts will help teach students about the power of tradition and cultural pride.

A collection of British-themed costumes hand-sewn with thousands of shimmering mother-of-pearl and plastic buttons, representing the cultural pride and charitable works of an Edmonton family, was donated recently by Michael and June Dickerson and her sister Candy Williams. Dickerson’s parents, Tom and Thelma Chissell, wore the encrusted finery as the city’s “Pearly King and Queen” for 26 years.

“It’s a huge piece of Edmonton history and community,” said Vlada Blinova, manager of the U of A Clothing and Textiles Collection. “One of the goals of the university’s clothing and textiles collection is to preserve local history and these costumes are a fantastic example of that.”

The modern-day artifacts will be used to teach material culture students about the symbolism and deeper meaning of clothing, she added.

“These costumes are a wonderful example of social and political meaning in textiles.”

Pearly pride: A tradition of charity

The costumes were based on a British tradition the Chissells brought along when they immigrated to Canada in 1970. “My dad wanted to draw attention to English heritage, and being born a Cockney, he could be a Pearly King,” said the Chissells’ daughter June Dickerson.

An orphaned London waif named Henry Croft, who worked as a street sweeper in 19th-century England, started the tradition of so-called pearly clothing in 1875, after befriending a tough breed of street vendors called Costermongers, who took care of one another when in need. They sported pearl buttons on their clothing as an emblem of their pride.

Croft wanted to help people less fortunate, but knew he needed to draw attention to raise money, so as he swept the streets, he collected buttons that fell from the garb of the wealthy and sewed them onto his own clothes. The practice soon spread among the Costermongers, who joined Croft in his charity work and became England’s first Pearlies.

From 1977 until Tom died in 2003 (Thelma died in 1991), the Chissells and their children stepped out in their buttoned best to local festivals, celebrations and landmark events like the 1978 Commonwealth Games in Edmonton, acting as community ambassadors and even drawing the attention of Queen Elizabeth II as she visited with the crowd.

“My mom was thrilled,” Dickerson recalled. “The Queen stepped over to us, my children presented her with flowers; that was probably the happiest day of my mom’s life.” The late Princess Diana also complimented Tom on his costume during a visit to Vancouver.

The Pearly collection of 16 pieces includes the king and queen costumes as well as outfits for a prince and princess, worn by Dickerson’s children, matching purses and caps, socks proudly displaying the Union Jack, a British poster and, most treasured of all, letters of thanks from Queen Elizabeth, the City of Edmonton and other groups for the charity work the Chissells carried out in their finery.

The costumes, decorated by Thelma, sport more than 10,000 buttons collected from friends and family around the world, and weigh up to 30 kilograms each. “My mother suffered from arthritis, but she sewed those buttons on anyway,” Dickerson remembers.

True to the Pearly tradition, the Chissells wore their outfits when doing charity work. They sang “jolly pub songs” in nursing homes, sold poppies for the Royal Canadian Legion, raised money for Terry Fox Runs, and even visited hospitalized children while on vacations to Hawaii, Dickerson said. Tom, who harboured a lifelong desire to be a Costermonger, received permission from the City of Edmonton and sold flowers from a cart outside the old Bay store (now Enterprise Square) downtown. Anything left over after covering his costs went to charity.

After her mother died in 1991 and her father passed away in 2003, Dickerson inherited the costumes, but wanted to see them preserved, so she approached the U of A.

“I know that they are going to be carefully stored and valued, and my parents would be tickled to think the costumes are at the University of Alberta where people can see and learn about them. I was proud of my parents for carrying on the Pearly tradition. They brought a bit of their homeland to Canada and they wanted to do things to make others happy. It meant a lot to them,” Dickerson said.

About Pearly Kings and Queens (Wikipedia)