Jennifer Ha is off to the Smithsonian to work on diversity and inclusion initiatives. 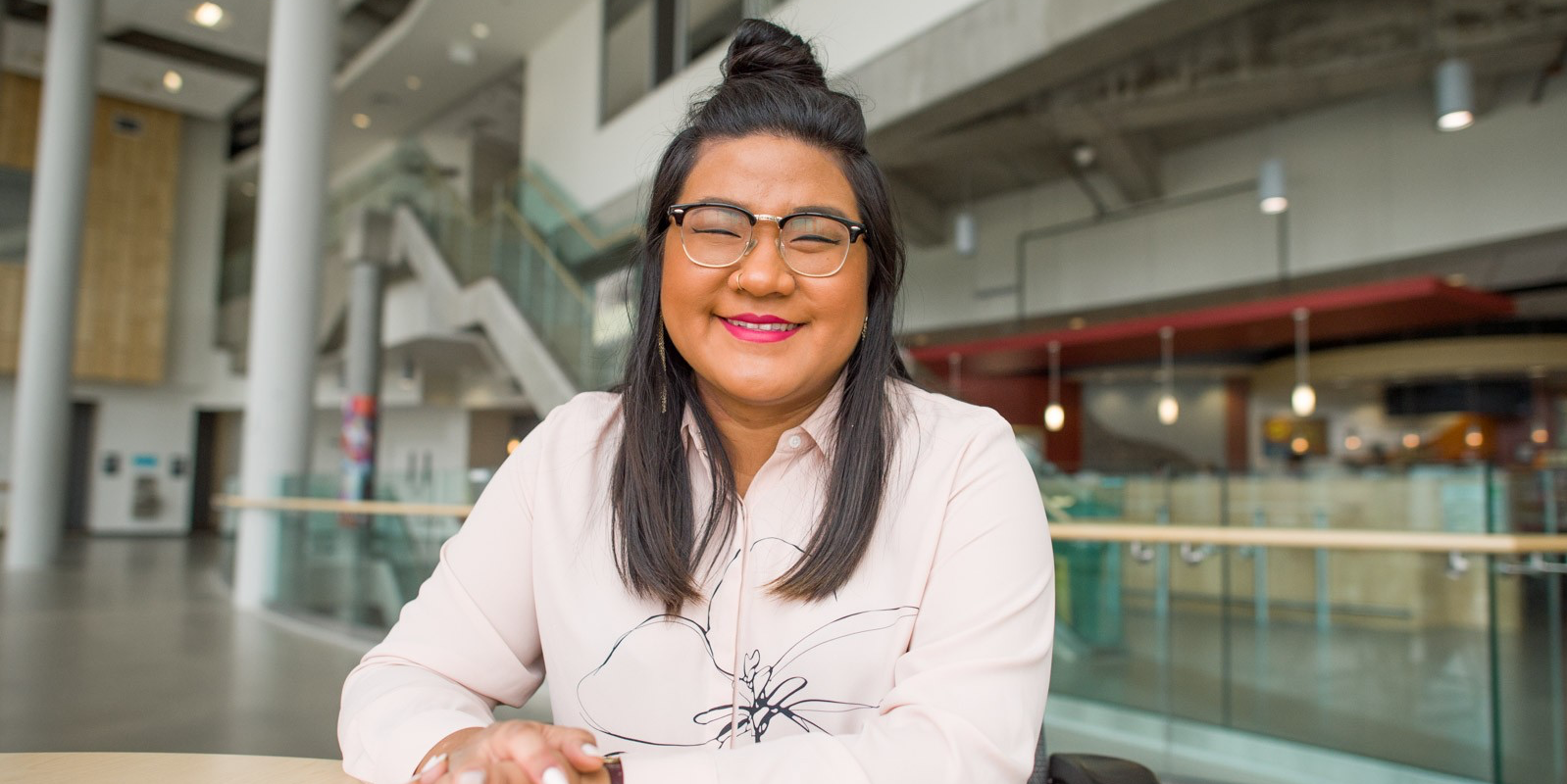 After attending 11 different schools in municipalities around the world, Jennifer Ha made herself at home at the U of A's Augustana Campus in Camrose. (Photo by Richard Siemens)

No one knows better than Jennifer Ha what it feels like to be the new kid on the block.

After leaving Korea when she was six, she attended 11 different schools—from St. Petersburg, Fla. to Seattle, Wash. to Prince Albert, Sask.—before landing at the U of A’s Augustana Campus.

"It was definitely hard growing up,” she said. “But it made me adaptable to new places, a lot more flexible and approachable. If I see the metaphorical new kid in the cafeteria now, I'm a lot more willing to reach out to them."

The constant displacement made Ha more sensitive to what newcomers of all kinds face every day, including the myriad forms of social injustice that go with the territory. Like many young people, she wanted to change what she saw was wrong with the world. It’s what made her decide on political science as her major.

"It might seem very high school naive, but there was a lot that didn't seem fair to me, so I wanted to study political systems so I could learn how to adjust them," she said.

After choosing Augustana Campus in Camrose for its strong liberal arts curriculum and intimate setting, she threw herself into all the faculty had to offer—working for the Dagligtale student newspaper, getting involved in residence life, joining clubs and studying abroad at Cuba’s Universidad de Oriente as part of Augustana’s Santiago de Cuba program.

She got to know all of her professors well, and feels the relationships she made at the campus will last a lifetime.

“It is rare to find a student who is not only intelligent and passionate about global affairs, inequality and injustice but is also deeply engaged in her own community and exercises real compassion for those around her,” said Sandra Rein, political studies professor and Ha’s capstone project supervisor.

“Her commitment to critical thought and a tireless curiosity combined with a wicked sense of humour make Jennifer the type of student who inspires me as a professor.”

For her final two years, Ha was accepted into the first cohort of the university's Peter Lougheed Leadership College, and in her final year she worked on a community project with the Camrose Public Library, welcoming newcomers to the area.

"A lot of new families—and I know it was true for mine—realize they don't have a lot of resources when they arrive. It's not only overwhelming but can even feel hostile because you feel so marginalized from mainstream society. So I've been doing research on what newcomer programs should be focusing on."

Now that she’s graduating with a Bachelor of Arts in political studies with a minor in global development studies, Ha feels ready to bring about the change she’s always dreamed about. This summer, she’ll work at the Smithsonian Institution’s Office of Equal Employment and Minority Affairs in Washington, D.C. on a project entitled "Diversity and Inclusion Initiatives." In this role Ha will help develop a set of standard operating procedures to help units across the Smithsonian better identify resources that further opportunities to recruit, hire and retain diverse candidates.

"Now having had an education in liberal arts, I feel really well equipped to approach these issues from multiple perspectives,” she said. “Being an immigrant myself, I'm really passionate about issues related to immigration and to race."

More than anything, Ha wants to keep that newcomer’s spirit alive. After her internship, she has her eye on the Immigration and Settlement Studies Program at Ryerson University. Eventually she’d like to work on policy, she said, making a real difference in the lives of immigrants.

"It's the nature of marginalization that people who are affected the most often get left out of these conversations. It's a gap that really must be closed.”

She also hopes to continue her big creative passion—spoken word poetry. She recently attended a conference on women in politics called Daughters of the Vote where she presented her own poetry on her experiences as a Korean woman living in rural Alberta.

"Something I've been doing a lot is developing curriculum based on spoken word poetry to educate people about social justice,” she said. “I think a lot of people feel the same way I do in high school, with everything going on in the world, what can I do? How can I work towards progress or justice.”

As she reflects over her five-year stay at Augustana, she said there is no doubt the campus played a huge role in developing her activist orientation and her leadership acumen, for which she was awarded the Mark Chytracek Leadership Award.

"I've loved every minute I've spent at Augustana. I feel like I'm a poster child for the campus and can't stop talking about it,” she said. “Choosing to study here was the best decision I’ve made in my life, and I think I'm leaving with great friends and mentors who will be there for the rest of my life."