BFA grad Mona Jiang came to UAlberta to earn a degree in stage management; along the way, she earned the affection of new friends and the respect of a mentor. 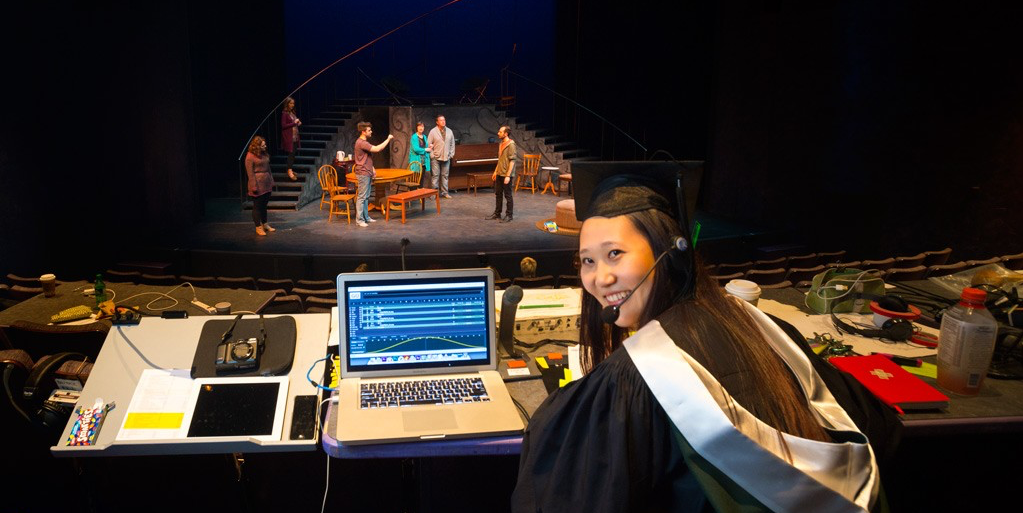 (Edmonton) The classroom is a picture of the complex work of the students. Packed with drafting boards, bits of fabric, tool boxes, work boots, computers and props from shows past and future, the room has been home base for the BFA stage management cohort for the past four years.

Feng Yi (Mona) Jiang arrived from Qingdao, a coastal city of 2.7 million residents in northern China, almost five years ago. With basic knowledge of English (reading and grammar) she started her university career at something of a disadvantage. “When I came here, I was really shy. I didn’t talk to anyone,” says Jiang. But now, at the end of her degree, she has gained the friendship and professional respect of many.

Choreography behind the scenes

“In China, I was a dancer and an actor,” says Jiang. “I am used to being onstage, but I wanted to learn more about what happens backstage.” The stage management program at the U of A caught her eye, because there is nothing like it in China. “My friend was planning to come to Edmonton and her father knew the process, so I decided to take the challenge and come here.”

Stage managing is a tricky business, choreographing the dance that happens behind the curtain. But Jiang was excited to try her hand at it. “I really was most attracted to calling cues, and also communicating with the departments like sound, lighting and props.”

At first, communication was a challenge, “I was really lucky; my classmates helped me a lot. They would give me their notes from class so that I could review and make sure I understood everything from that day, and before midterms and finals we would study together.”

The program also provided Jiang and her fellow students with real-life experiences to see the theory applied. “We got to go backstage at Alberta Ballet’s production of Madama Butterfly and Catalyst Theatre’s Vigilante. Watching someone actually do it was so different!”

Not a one-person show

When she was accepted into the program, Jiang was immediately welcomed into the cohort of three other BFA stage management students. In the program, students largely have the same classes together and work on shows in teams. After four years together, the quartet was more like family than classmates. “I miss them already,” says Jiang.

The BFA in stage management is a relatively small program, and having an international student is rare. “There were no other Chinese students in the program, so it was hard at first,” notes Jiang, “but my English really improved!”

Jiang notes that she also received a lot of support from her professors, especially her mentor John Raymond. “John helped me so much; he provided so many extra opportunities to be backstage during shows like the Citadel’s production of A Christmas Carol.

“He was always encouraging me and would make sure I answered questions in class,” says Jiang. “I have learned so much from John. He always says as a stage manager you have to run the show both artistically and technically. I will always remember that.”

Raymond, a professor in the Department of Drama, knows Jiang well. Recalling one class in which he sang to the students to make a point, he says, “Mona was literally giggling, she was so embarrassed for me! It was a big change for her, coming to our university culture.”

Raymond notes that Jiang has been an inspirational student in the drama department. “When she began her stage management program three years ago, she was a quiet, shy and deferential student with limited verbal and written English-language skills. Now she is a strong, confident and generous theatre practitioner who communicates well in English and connects strongly with others.”

“Mona is a great collaborator, always thoughtful and respectful of others, and excels both when she leads and when others direct her,” adds Raymond. He notes that she approaches her work and learning without any cynicism, which is refreshing to all of her professors.

“When I first met her, I wasn’t sure that she understood exactly what she was getting into,” says Raymond. “Stage managers are part coach, part counsellor, part drill sergeant and part negotiator. Mona has the ability to collaborate and she has a real passion for it. With her artistic background, she brings a lot of experience to the work.”

Jiang may have begun shy, but Raymond point out that “she has embraced all of the learning opportunities and her time in the department with such a sense of excitement and joy that, along the way, she has made many very good friends. She will be missed.”

“This university has so much going on, and the facilities and equipment are excellent. I love the environment and all the theatre here in Edmonton,” Jiang says. “It is a good environment. There are lots of practice opportunities; you can try directing, acting, costume design and sound design; and everyone is so supportive.” Her resumé already lists three stage-manager jobs and production work on three other shows. Jiang hopes to stay in Edmonton after graduation to use her skills to mount a Chinese production with some other expats.

Jiang’s last word on the subject is simple but typically encouraging: “If I can do it, you can too.”