UAlberta’s newest building is officially one of its greenest. 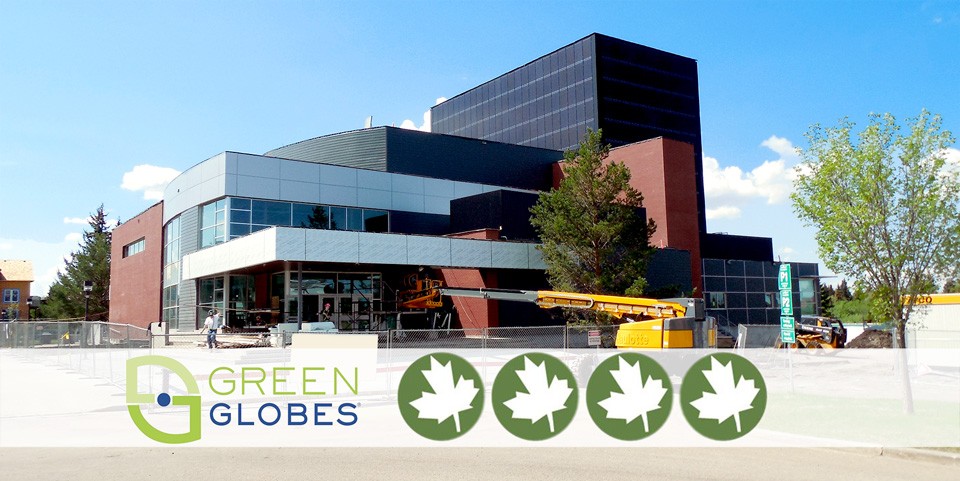 (Edmonton) The University of Alberta’s newest building is officially one of the institution’s greenest.

“We have reached our goal of creating a world-class performance venue that has in addition been designed and constructed with leading-edge sustainability as a goal,” said Michael Madsen, senior project manager with the U of A.

The performing arts centre is a 550-seat theatre, planned and built as a joint initiative between the City of Camrose, Camrose County, the Government of Alberta and the U of A.

Four Green Globes are awarded to projects demonstrating national leadership and excellence in the practice of energy, water and environmental efficiency to reduce environmental impact.

“Four Green Globes is an incredible achievement for any building project, let alone for this type of a facility,” said Madsen.

“It was important to challenge the accepted norms—in this case, that performing arts centres are difficult to make sustainable,” he added. “The design-build team was challenged to look beyond their usual sustainability toolkit to emerging and maturing technologies, while at the same time minimizing risks.”

One maturing technology that features prominently in the centre’s finished construction is an innovative solar panel installation. Instead of placing solar panels on the roof, the walls of the centre’s 70-foot fly tower have solar panels built into them. This “building-integrated photovoltaic” system includes about 500 modules that generate 130 kilowatts of clean electricity—the largest array of its kind in Canada.

The centre is also one of the first theatres in North America to use exclusively LED stage lighting. Compared with traditional incandescent lights, LEDs are more energy-efficient, turn on instantly, are dimmable, can change colours on command, and are expected to last tens of thousands more hours. These qualities make them especially useful for the stage, in addition to their environmental benefits.

LEDs are also used throughout the building for interior and exterior lighting. Depending on the cost of electricity off the grid, the LED stage lighting could save $30,000 to $35,000 each year, according to Michael Versteege, manager of the U of A’s Energy Management Program.

Funding for these sustainability features is provided through the university’s Envision program, which will recover the investment from cost savings on energy use and renewable energy production.

Versteege anticipates that the sustainable features the university has invested in the centre will result in savings of at least $50,000 per year.

This initiative is one of many ways the U of A is following through on its sustainability plan goal of continuing to reduce greenhouse gas emissions through action on energy efficiency and conservation, and implementation of renewable and alternative energy.

Green from foundation to fly tower

Madsen emphasizes that even without harnessing these emerging and maturing technologies, the design-build team already had several innovative sustainability features in the plans.

“Although the project has achieved four Green Globes, the base design criteria we were aiming for was already three Green Globes. This required many sustainable measures including a high-efficiency building envelope, low energy consumption, low water use and green building practices, to name a few,” said Madsen.

After more than two years of planning and construction, the Camrose Performing Arts Centre will open with a string of community-oriented events in fall 2014.

“This project has been an exceptional experience for me,” said Madsen. “The passion and attitude that the design-build team brought to the project and the willingness of the project partners to allow us to design and build ‘outside the box’ enabled real innovation in the CPAC’s design.”