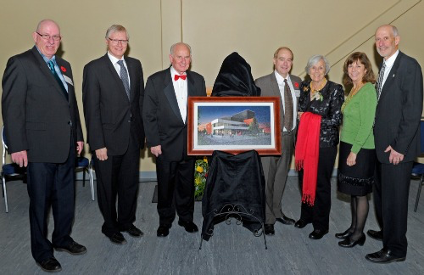 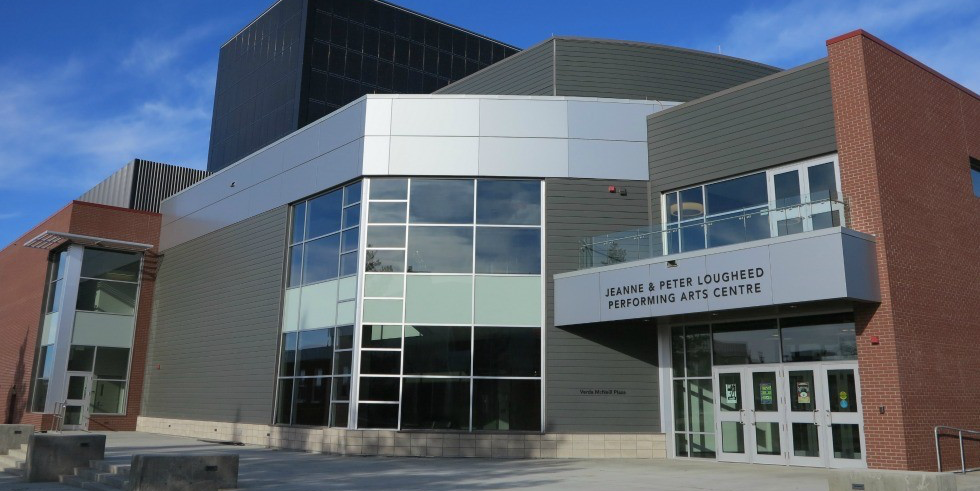 The Jeanne and Peter Lougheed Performing Arts Centre was officially named at its grand opening gala in Camrose Nov. 1, 2014.

(Camrose) At the official opening of the new performing arts centre Saturday night, the City of Camrose and University of Alberta announced the centre will be named the Jeanne and Peter Lougheed Performing Arts Centre.

The building was one of three projects across Alberta chosen by the family to remember the late Peter Lougheed, Alberta’s 10th premier.

“This project is unique among the three as it also honours Jeanne, whose lifelong passion and support for the arts was first nurtured right here in Camrose,” said Camrose Mayor Norm Mayer. “Jeanne and Peter were often referred to as a team, and their legacy shaped a progressive attitude in support of cultural initiatives, which will continue to resonate in this state-of-the-art building for generations to come.”

Stephen Lougheed, speaking on behalf of his mother Jeanne, who was also in attendance, said the honour resonates strongly with the family. “This project recognizes our parents together, but in particular draws attention to Mom’s influence and her love for the arts. It celebrates our parents’ long partnership and their belief that the support of creative endeavours is integral to building healthy communities.

“Support for and access to cultural initiatives throughout the province was a priority during the years our father served as premier,” Lougheed noted. “Its importance continues today and is exemplified in this beautiful new facility.”

Dual-purpose design for a university and a community

The centre’s distinctive design–using technology that wasn’t even available when shovels first broke ground on the project two years ago—focuses on energy efficiency and sustainability. The all-LED house and stage lighting, believed to be a first in North America, provides dimmable, colour-true lights that eliminate the excessive power draw and heat that traditional lights generate. As a result, utility costs will be reduced substantially. The exterior of the fly-tower hosts the largest in-built photovoltaic array in Canada, with solar panels integrated into the building finish. The panels, installed on all four sides of the fly-tower to take advantage of Camrose’s latitude, will help provide needed power when the centre is being used for performances. A two-way metering system will also track the return of power to the grid during non-peak times. These two innovations combined are projected to reduce annual utility costs by more than $50,000.

As part of the U of A’s Augustana Campus, the centre will serve a dual purpose, supporting the university’s educational programs and functioning as a community facility for Camrose and the surrounding region.

Allen Berger, dean of Augustana, praised “the extraordinary town-gown collaboration that has made this project possible.”

“We look forward to welcoming the community to university events,” he said, “and we’re excited that community arts groups—especially the many dancers in Camrose—will finally have a state-of-the-art facility that meets and perhaps even exceeds all their needs.”

The Jeanne and Peter Lougheed Performing Arts Centre was made possible through a partnership of the U of A, the City of Camrose, Camrose County and the Government of Alberta.