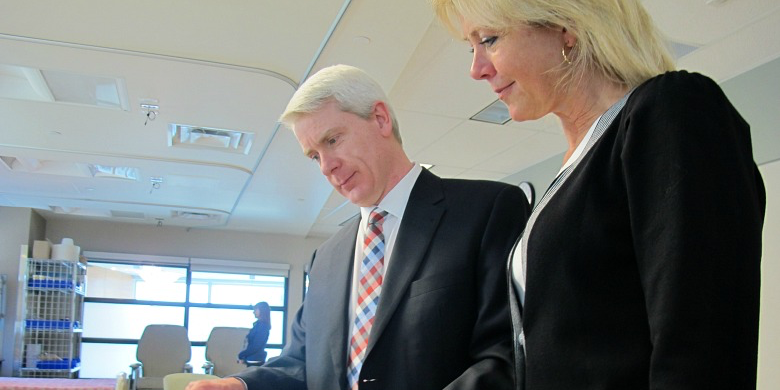 Finlay McAlister (left) and Miriam Fradette, one of the pharmacists who took part in the UAlberta study of interventions for patients who have suffered from a stroke.

(Edmonton) A new study from the University of Alberta shows that pharmacists can make a healthy difference for patients recovering from stroke.

Medical researchers from the Faculty of Medicine & Dentistry are looking at nurse- and pharmacist-led interventions to improve the standard of care for patients who have suffered minor stroke or transient ischemic attack, also known as “mini-stroke.”

“What we were finding was that six months or 12 months after their stroke, a lot of patients still had uncontrolled blood pressure and uncontrolled cholesterol,” said Finlay McAlister, lead author of the study. “[This] puts the patients at an increased risk of recurrent events, including strokes, heart attacks, amputation from peripheral vascular disease, and death.”

To improve outcomes for these patients, McAlister and his group studied 279 patients who had recovered well or fully after a stroke or mini-stroke and were included in either nurse- or pharmacist-led interventions to improve blood pressure and cholesterol levels. Following an initial assessment at one of the three stroke prevention clinics in Edmonton, each patient had one appointment each month for six months with a nurse or pharmacist. Compared with statistics under the current standard of care, nurse-led care saw a 30 per cent improvement in blood pressure and cholesterol levels, and pharmacist-led care saw a 43 per cent improvement.

McAlister, a professor in the Division of General Internal Medicine, says each appointment consisted of the nurse or pharmacist measuring the patient’s blood pressure and cholesterol levels, sending the results to the patient’s primary care physician, and offering lifestyle advice on eating well, getting exercise, taking prescribed medications and quitting smoking.

In the nurse-led intervention, the nurses recommended to patients with blood pressure or cholesterol levels still above Canadian guideline-recommended levels that they should schedule an appointment with their primary care physician.

“[The treatment algorithm] doesn’t name a specific drug; it just says start with this class, add a drug from this second class if still uncontrolled, and then add a drug from a third class if needed for achieving targets levels,” said McAlister. “The pharmacist had the option to choose the best drug within the class based on patient side-effect profile, whether the patient had drug coverage, and so on.

“Most of the blood pressures and cholesterols were dealt with and controlled fairly well by the pharmacist prescribing the medications,” he noted.

McAlister hopes the intervention will be rolled out in rural and smaller communities throughout Alberta, particularly those without a stroke prevention clinic.

The study was funded by the Heart & Stroke Foundation of Canada, Alberta Innovates – Health Solutions, Knowledge Translation Canada, and the Capital Health/University of Alberta Chair in Cardiovascular Outcomes Research. The findings were published in the Canadian Medical Association Journal.