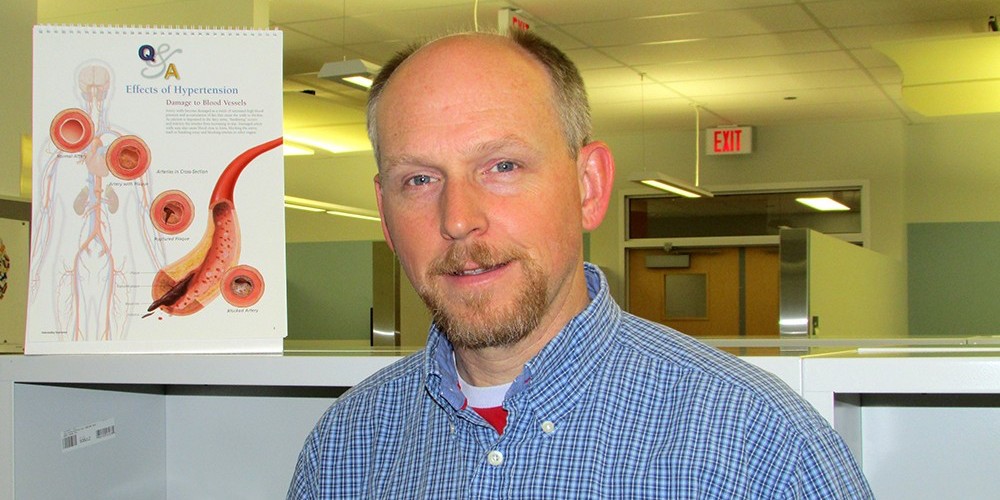 Scot H. Simpson, professor in the Faculty of Pharmacy and Pharmaceutical Sciences, found that pharmacists on primary care teams had a direct impact on improving the health of patients with Type 2 diabetes.

Over the past nine years, Scot H. Simpson, professor in the Faculty of Pharmacy and Pharmaceutical Sciences at the University of Alberta, has been studying the role of pharmacists on primary care teams and their impact on the health of patients with Type 2 diabetes.

His most recent study, published in the May/June issue of the Journal of the American Pharmacists Association, found that having pharmacists on primary care teams had a significant impact on the treatment of blood pressure in patients with Type 2 diabetes.

The study was part of a larger research project published in Diabetes Care in 2011.

The main study, which was a randomized control trial, examined blood pressure control in people with Type 2 diabetes as a measurable, clinically important outcome. Results of the main study showed that the addition of pharmacists to primary care teams produced substantial improvements in patients' health.

According to the Canadian Diabetes Association, 10 million people in Canada are living with diabetes or pre-diabetes, and more than 20 Canadians are newly diagnosed with the disease every hour of every day.

Simpson wanted to delve further and “pinpoint what specifically pharmacists did to improve patient health."

“Our goal with this sub-study was to deconstruct the interventions being used and understand exactly what it was that the pharmacists did to have a positive effect on patient health,” says Simpson.

Patients in the intervention group were counselled directly by two pharmacists, who worked with the patients’ physicians as part of primary care teams at several clinics within Edmonton’s Southside Primary Care Network. Control group patients did not see a primary care team pharmacist during the study. At the end of the study, 42 per cent of the intervention group patients had at least one change to their blood pressure drugs, compared with 26 per cent of the control group patients.

Simpson’s findings support the importance of interprofessional health collaboration in treating patients. “Adding pharmacists to the team to review medications, identify drug-related problems and manage the treatment has a positive effect on blood pressure levels of patients with Type 2 diabetes,” says Simpson.

“The pharmacists involved in the study had very collaborative discussions with the physicians about the patients’ medications and proposed drug treatment options,” he says. “It was from these discussions that the pharmacists were able to suggest alternative medicines or changes in dosage that contributed to lowering the patient’s blood pressure.”

In fact, there was one patient who had difficulty in achieving the blood pressure target because of reflex tachycardia, which is increased heart rate in response to lower blood pressure.

“The pharmacist was able to recommend switching from one drug to another and was able to help the patient achieve better blood pressure control without adverse effects,” explains Simpson.

Alberta’s pharmacists currently have the broadest scope of practice in North America. Although this study was conducted before Alberta pharmacists were given authorized prescribing authority, the pharmacological knowledge pharmacists bring to the team is critical, says Simpson.

“Pharmacists use their training to review the patient’s medication history and work with physicians to find the best solutions for patients.”