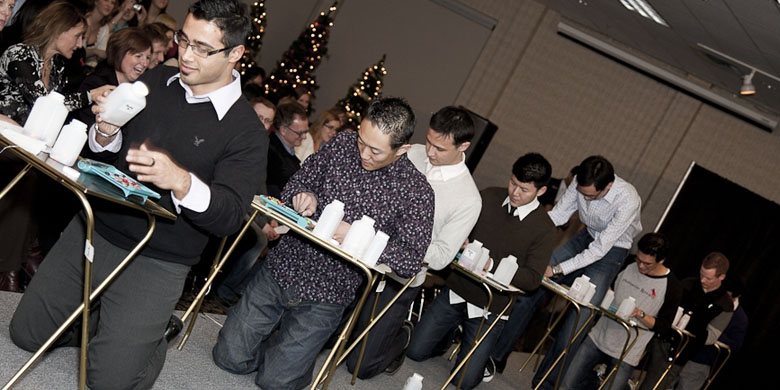 (Edmonton) Joey Ton admits to being nervous when he took to the stage last year to help raise money for prostate cancer research. The University of Alberta student, now in his third year, strutted his talent and charm as a contestant in the first-ever Mr. Pharmacy pageant. And looking back a year later, he’s glad he did it: the fundraiser not only brought in $6,000 for a good cause, but also created lasting friendships among the students.

“It is one of my fondest memories,” said Ton, who also serves on the executive of the Alberta Pharmacy Students’ Association. Though it was “nerve-wracking” to be on stage, Ton felt great about helping raise money and sharing in a student experience. “With the friendships we make getting together on events like this, we help each other get through school and through life itself.”

The tongue-in-cheek all-male pageant, besides offering a lot of goofy fun, has the fringe benefit of challenging the fuddy-duddy stereotype of pharmacists as bland “pill-counters”, Ton noted.

The Nov. 23 event, which was dreamed up by students in the University of Alberta’s Faculty of Pharmacy and Pharmaceutical Sciences, is almost�but not quite�sold out, and organizers hope to raise $12,000 this year.
Mr. Pharmacy falls into step with the male-motivated “Movember” theme of growing moustaches this month to raise awareness of prostate cancer, and originally was developed as a first-term event to give pharmacy students, faculty members and practicing pharmacists from all over the province and Canada, a way to mingle and form relationships that would carry over into their profession after graduation.

As regulatory changes give pharmacists more of a role in the health-care system, they also need more of a profile in the public arena, Ton said. “By uniting young pharmacists in school and having them create professional bonds earlier, it will benefit the entire profession a lot more.”
Fun events like the pageant also freshens the public impression of pharmacists, Ton believes.

“It is about getting the pharmaceutical profession out there. We are the most accessible health-care professionals. In any drugstore, you can see a pharmacist, just like that. This pageant shows that we are community-oriented, we are going out into the community and doing things for good causes. I hope that pharmacists practicing right now notice our event and are motivated to become more involved with their communities in raising awareness of public health.”