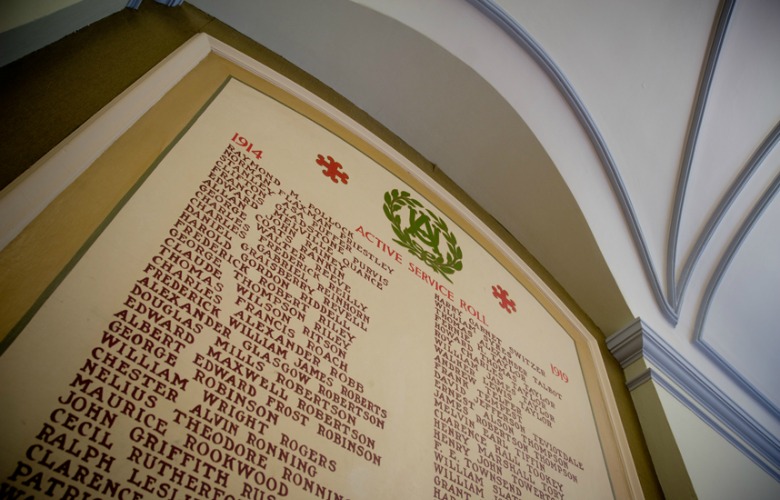 130708-active-service-roll-banner
The Canadian Military Leadership Pilot Initiative renews a proud tradition between the University of Alberta and the Canadian Armed Forces that dates back to the First World War.

(Edmonton) A renewed partnership between the University of Alberta, the Canadian Armed Forces and the Department of National Defence will see a new joint pilot program take place at the U of A starting this fall.

Today, the Honourable Peter MacKay, minister of national defence, announced the establishment of the Civil Military Leadership Pilot Initiative, a program co-directed by the University of Alberta and the Canadian Armed Forces. The four-year pilot will serve as a testing model for similar program development at other Canadian universities.

"This new joint pilot program is an example of outstanding collaboration between the Department of National Defence, the Canadian Armed Forces and the University of Alberta," said Minister MacKay. "It renews a partnership between the university and the Canadian military dating back to the First World War. This keeps very much with the tradition of the Canadian Officer Training Corps, which was set up on campuses around Canada until 1968."

The leadership program will require students to be enrolled within any program at the University of Alberta and serving concurrently with a local army reserve unit. Students will need to complete the formal academic objectives of the institution, as well as meet specific military training requirements to be eligible to receive a certificate marking their participation in the program.

In keeping with a proud tradition of co-operation with the Canadian Armed Forces, the university’s leadership in undertaking this pilot program responds to the institution’s vision of welcoming change and seizing opportunity. Acting Provost Martin Ferguson-Pell said the U of A's involvement is fundamentally linked to its desire to contribute to the "further development of our society and its institutions."

“We are delighted with the strengthening of links between Canada’s military and our institution,” said Ferguson-Pell. “The University of Alberta is ideally situated for the development and testing of this program, given our region’s strong support for the military and sizable presence of regular and reserve forces, as well as our institution’s ongoing commitment to developing outstanding learning and leadership opportunities for our students.”

The leadership program, open to both officers and non-commissioned members of the reserves, aims to develop future citizen-leaders by offering significant academic and extracurricular opportunities that will broaden the participants’ experience and develop skilled, disciplined leaders. Students must apply to and be accepted by the university and one of the local army reserve units separately.