Program aims to help bystanders become the friend someone may need in a critical moment. 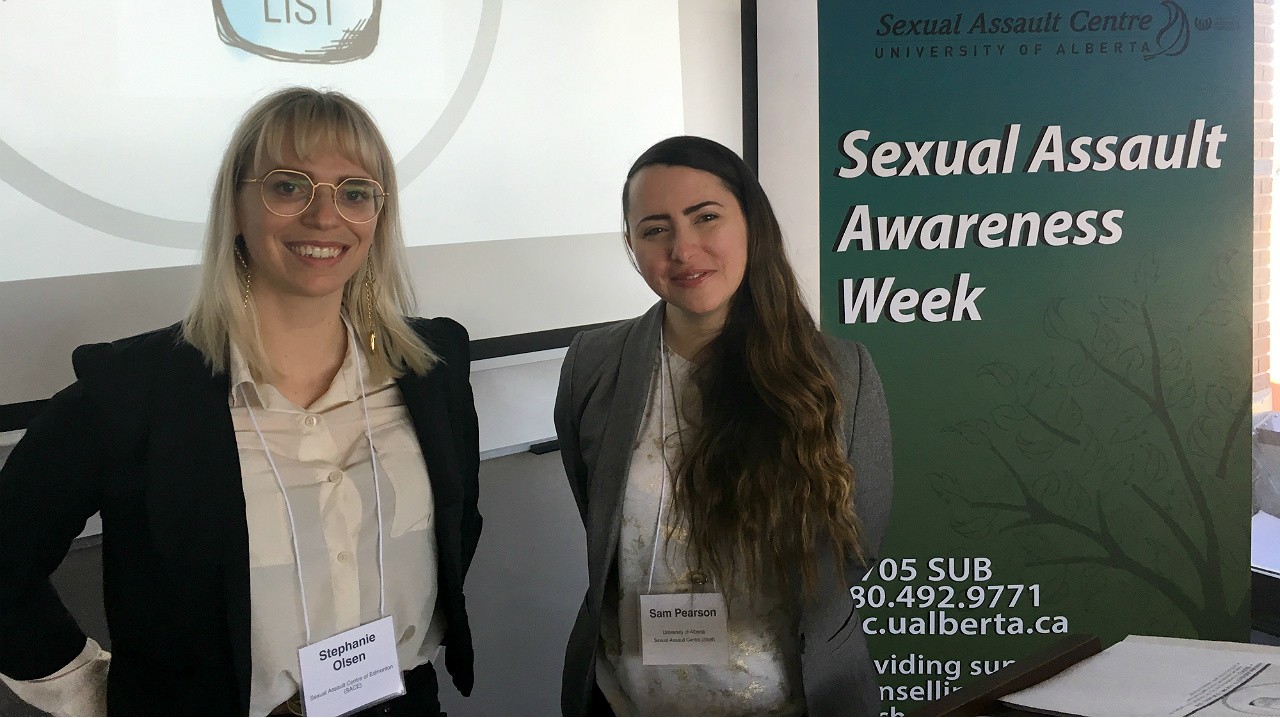 Stephanie Olsen (left), head of strategic partnerships for the Sexual Assault Centre of Edmonton, and Samantha Pearson, director of the University of Alberta Sexual Assault Centre, announced the launch of a pilot project to train local bar staff in how to intervene when they witness sexual assault or harassment. (Photo: Bev Betkowski)

The 5 Minute Friend offers training to bar staff and managers in night spots along two of Edmonton’s busiest corridors, Jasper Avenue and Whyte Avenue, to help them recognize and head off inappropriate behaviour among customers and staff alike.

“We previously haven't had the opportunity to do a lot of education specific to this population, and we wanted to be proactive by expanding the conversation beyond survivors and perpetrators to include bystanders,” said Samantha Pearson, director of the U of A Sexual Assault Centre.

“We see the nightlife establishments in the Whyte Avenue and Jasper Avenue areas as part of our campus community, given that they are frequented by a tremendous number of patrons who are students, and because students also make up a large proportion of their workforce.”

The plan is to eventually also offer the training to campus bars like Room at the Top and Dewey's, Pearson added.

The initiative was launched after a local bar contacted the Sexual Assault Centre of Edmonton (SACE). One of its employees was charged with several incidents of sexual assault among 17- to 22-year-old female customers.

“They recognized the importance of training staff and management on how to consistently, respectfully and effectively respond to incidents of sexual violence perpetrated by staff and patrons,” Pearson said.

“This kind of education is vital in any setting where alcohol is being served and consumed. Alcohol is the most common date rape drug; it’s socially acceptable to drink, it’s readily accessible and relatively inexpensive to use. It reduces inhibitions, and some people take advantage of that vulnerability.”

Local organizations like the Old Strathcona Business Association and Urban Sparq Hospitality, which owns 18 establishments, are offering their support and co-operation with the project.

It’s not always easy for staff or even managers to step in when they see an uncomfortable situation developing, Pearson said.

“It can be difficult for staff to make patrons do what they say, but at the same time, they have a duty of care. We've seen this sort of education with bar staff when it comes to drunk driving; intervention training when it comes to sexual violence is also a natural fit,” she said.

Staff are often in the same age range as their customers—18 to 24—so it can be awkward to intervene. They may also feel worried for their own safety, about repercussions from their bosses and about offending customers or even from the person who is being targeted, Pearson said.

During the interactive workshop, participants learn to identify and intervene in situations where sexual violence is either happening or has the potential to happen.

“In essence, they are learning to become a friend and ally during a brief time in someone's life when they might need a friend the most,” Pearson said. “We watch and discuss videos about consent and bystander intervention, participants take part in several learning activities, and ultimately they get to practise intervening through small group discussions.”

One of the main tools being used in the training is a video game developed by U of A student Kenzie Gordon. In the space of a few minutes, It’s Your Move lets players work through three scenarios of sexual harassment, showing them different interventions and the outcomes of each choice.

“The game creates a safe space where staff can explore their worries and reactions about intervening,” Pearson said. “It makes a very heavy topic more accessible, covers a wide range of ideas in a short time and is much better than a lecture-based delivery.”

To date, six training workshops have been held with an average of 20 to 30 workers per session from several Urban Sparq establishments, with more to come, said Al Gothjelpsen, director of operations for the company.

“It empowers our team members to be on the right side of the battle,” he said.

The plan is to reach many more bars and lounges over the next several years through the Alberta Gaming and Liquor Commission's Best Bar None program, which gives accreditation to venues that focus on safety and customer service.

When the training is completed, it’s hoped staff will have the ability to recognize when situations of sexual harassment and violence are developing, and have the confidence to actively intervene and prevent an incident.

“It’s been a labour of love,” said Stephanie Olsen, head of strategic partnerships for SACE. “Collaborating with the U of A was a unique opportunity to meet the needs of the nightlife community. The program has been a transformative example of partnership, bringing together not only the two centres, but also several community partners to work on the issue. It’s truly heartening.”