By the time I enrolled … in the class of ‘71, I was 35 years old. This was almost a scandal as they didn’t take anyone over the age of 30 in those days.

Honorary degree recipient and UAlberta alumna Helen Hays tells grads to expect bad days and make the best of them. 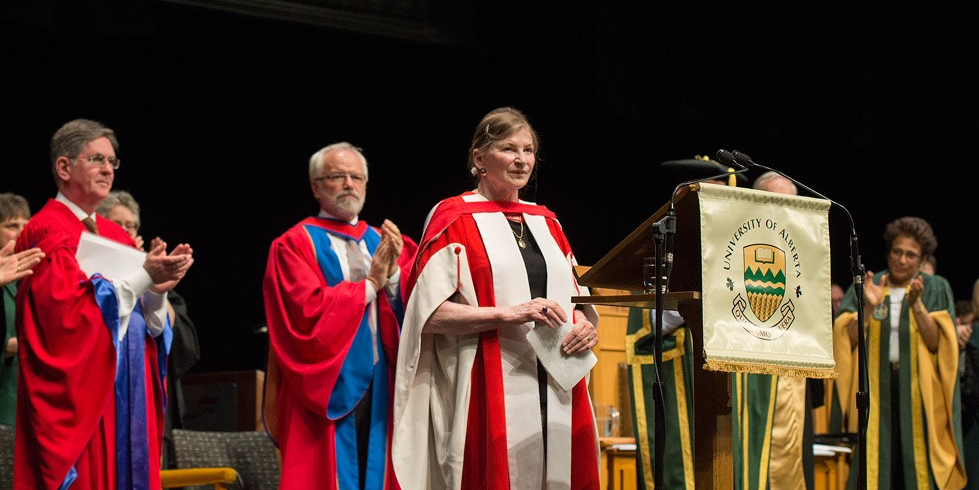 (Edmonton) A historic country estate overlooking three acres of finely manicured Victorian gardens near Cornwall was the idyllic backdrop of Helen Hays’ childhood—like something straight out of Downton Abbey.

And just like the TV drama, the good times didn’t last.

Hays’ mother died of meningitis in 1939, when the girl was just six years old. With the world at war, her grief-stricken father joined the army, serving three and a half “very long years” in India. That left Hays and her siblings alone with their stepmother—until she sent them to boarding school.

“This was a terrible calamity in our young lives and I couldn’t understand how our mother’s death caused us to be so pushed away from everyone and everything that we loved,” said Hays on June 6, when she received an honorary doctor of science degree from the University of Alberta.

The U of A alumna’s early experience with death had a lasting impact on her life and career in health care, first as a nurse and later as a physician specializing in palliative care and pain management.

“When I became a doctor, this moment taught me to include children in the events that surround a death, because no matter how difficult this may seem at the time, it is best for the children that secrets are not kept from them,” Hays told graduands of medicine and dentistry, rehabilitation medicine, and public health.

Hays’ decision to become a physician fulfilled a childhood dream, but her path was far from direct, her medical studies interrupted when she became a mother. By the early 1960s, Hays was a trained nurse and midwife, living in London with her husband and three young children. One of their best friends, Liz Harvey-Kelly, became sick with terminal cancer.

“It was my earliest experience of a kind of self-taught palliative care,” she remembered of managing her friend’s pain in her final days.

Not long after Liz’s passing, her husband died of a heart attack, leaving the Hays family to care for the couple’s two children. London became unaffordable, but fortunately opportunity presented itself at the U of A, which recruited Hays’ husband Peter to join the new department of psychiatry.

The U of A’s dean of medicine, Walter C. Mackenzie, encouraged Hays to enrol in medical school, and even helped “break the rules” by admitting the 35-year-old, who was among just 15 women out of 100 students in her class.

“This was almost a scandal as they didn’t take anyone over the age of 30 in those days,” she said. “I have a great thank you to give to the University of Alberta for allowing me to complete my degree, and especially I would like to thank dean Mackenzie, who sadly is no longer with us.”

Early in her second career as a general practitioner, Hays treated a young mother with acute leukemia who was experiencing intense headaches. Morphine helped her sleep, but she would still wake in pain and the young doctor realized “we did not know how to treat her properly,” unable to anticipate pain before it recurred.

Hays went on to treat others with terminal illnesses, making house calls while driving around in an enormous Chrysler Cordoba.

“It was then that I realized modern medicine didn’t have much time for pain control with the terminally ill,” she said, noting that the topic was highly controversial because doctors at the time were opposed to giving addictive opiates.

“As if addiction is a priority issue at such a time.”

Pain management became the focal point of Hays’ career as she established, with help from the Grey Nuns, Western Canada’s first palliative care unit at Edmonton’s General Hospital, and a second unit at Misericordia Hospital.

Hays is recognized as a pioneer in her field through membership in the Order of Canada, the Alberta Order of Excellence, the Military and Hospitaller Order of Saint Lazarus of Jerusalem and being named an Edmontonian of the Century, among many others.

It’s a remarkable legacy that came despite the moments in her life when her world was at its most bleak.

“There will be bad days for all of you along the road of life,” Hays told the class of 2014. “But when they come, make the best of them.”